Vivi-Anne Hultén was born in Antwerp in Belgium in 1911. She was the daughter of the merchant Sven Edvin Hultén and his wife Signe Olivia. In 1916 the family moved to Stockholm. It remains unknown as to when and why Vivi-Anne Hultén developed an interest in figure-skating. It can, however, be confirmed that she joined a club which had already produced several stars in the field, namely Stockholms Allmänna Skridskoklubb (SASK) (Stockholm public ice-skating club). She was following directly in the footsteps of Magda Julin and Svea Norén.

Vivi-Anne Hultén had already provided evidence of her great talent when she was young. She was not yet 16 years old when she made her debut in the 1927 Swedish championship and won a gold medal. During her subsequent career she won another four Swedish championship golds in the years 1928, 1929, 1933, and 1934.

Vivi-Anne Hultén competed six times in the World championships, which during the 1930s was held annually. Her debut in Montreal in 1932 finished with a fifth-place ranking. The next year, in Zurich, she won the silver medal. As the following championship was held in her hometown of Stockholm she was under a lot of pressure to perform, but only managed fourth place and so lost out on a medal. The ensuing three years she was more successful, gaining bronze medals in Budapest, Paris, and London.

Vivi-Anne Hultén was the only woman in the small Swedish team which competed at the 1932 Winter Olympics in Lake Placid, USA. A total of 15 women competed in the figure skating. According to Sven Lindhagen’s report in Berättelse över Olympiska Spelen 1932, from 1932, she did reasonably well in the so-called ‘school’ round, after which she was in third place, and she was deemed to have a good chance of advancing further. However, during what initially was a promising free-style round she happened to “skate into a dip in the ice and fall…”. She finished in fifth place overall. The 1936 Winter Olympics at Garmisch-Partenkirchen in Germany seemed to offer a chance at avenging this low ranking. Vivi-Anne Hultén had prepared herself by spending time in both England and Hungary, as well as benefiting from the skills of a particular Swedish trainer. 26 women began the Olympic competition, and 23 of them completed it. Ulrich Salchow, in Berättelse över Olympiska Spelen 1936, stated that the Swede showed nervousness during the mandatory ‘school’ round and she was subsequently ranked fourth, just a few points away from gaining a medal. His description of her free-style round was more positive. “Her four-minute turn was well-performed”, as he put it. The free-style round resulted in Vivi-Anne Hultén being bumped up into medal qualification and she was awarded the bronze medal. Unlike other competitors Vivi-Anne Hultén did not make a Hitler salute as she was standing on the medal podium. She commented thus: “I am from Sweden. I do not do that sort of thing.”

In Nordisk Familjeboks Sportlexikon, from 1941, Ulrich Salchow presented an analysis of Vivi-Anne Hultén’s qualities, stating: “Thanks to a strictly-maintained training programme, which could have produced the opposite result, Vivi-Anne Hultén attained the top ranks as a competitive ice-skater. She was rock-solid in the mandatory round, but her free-style programme lacked some of the difficult jumps and pirouettes which her competitors had mastered. Her free-style programme was nonetheless top-class thanks to her skilled dancing and sense of rhythm. As a performing skater she was one of the most admired in the world and her ice-dancing has been recognised by international experts as unequalled.”

In connection with the latter it should be noted that Vivi-Anne Hultén performed in 20-30 public exhibitions every year spread across several European countries.

In 1938 Vivi-Anne Hultén made her way to the USA where she became professionally employed for the first time by the ice-skating show Ice Follies. She eventually married the businessman Nils Tholand. She was later re-employed by the Ice Capades which was another touring ice-skating show. Whilst doing so she met Gene Theslof, who had been Sonja Henie’s ice-dancing partner. Vivi-Anne Hultén then married Gene Theslof and the couple became a much-loved element in many ice-skating shows. Later they become instructors for young ice-skaters.

Nickname: The Flame of Sweden 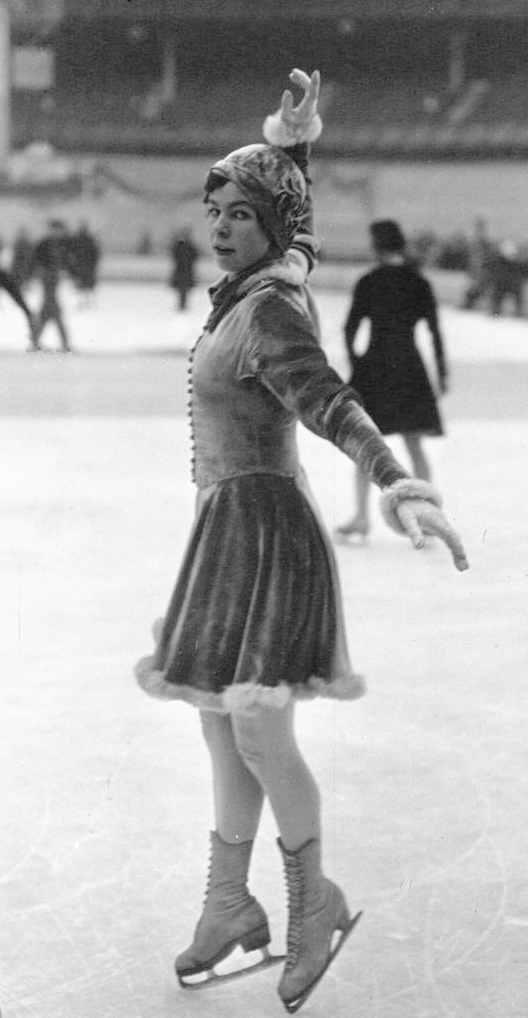