Adelaide von Skilondz was a coloratura soprano. She sang and was active at the Marinsky Theatre in St Petersburg, at the Imperial Court Opera in Berlin and at the Kungliga Teatern in Stockholm. She was also known as the voice teacher Madame for several generations of young people studying to be opera and concert singers.

Adelaide von Skilondz was born in 1882 in St Petersburg. Her father Leo Andrejev was a colonel in the cavalry and her mother Adelaide, née Christman, was his wife who ran their wealthy, liberal and cultured home. Here Adelaide von Skilondz, as one of three daughters, was noted for her perfect pitch and her unusually precocious piano-playing. After already mastering several Beethoven sonatas by the age of seven, she was able to develop her gifts as the pupil of one of Russia’s most eminent piano teachers at the conservatory, Felix Blumenfelt. She also studied harmony, instrumentation and composition.

She also excelled at school, and her fine marks were rewarded by her parents with a journey to any country of her choice. She chose Sweden. In the northern Swedish province of Norrland, she performed for mining engineers, and apart from being thanked afterwards, she was advised to undergo voice-training. She continued her studies for the conservatory’s head voice teacher, Natalia Alexandrovna Iretskaya, who had studied with the Swedish opera singer Henriette Nissen-Salomon. Henriette Nissen-Salomon had been a voice pedagogue for twenty years at the conservatory in St Petersburg, at that point newly started, and she had finely polished the Russian ornamental singing style, a heritage that Adelaide von Skilondz’ voice teacher then took over.

Adelaide von Skilondz married Vladimir von Skilondz, an official and ministerial director, in 1905. In 1908, she started at the Marinsky Theatre and in the autumn of 1909 she made her break-through as the queen in Rimsky-Korsakov’s posthumous opera The Golden Cockerel. In the spring of 1910, Adelaide von Skilondz left Russia and her husband with her sights set on the court opera in Dresden. On the way, she passed through Helsinki where she sang the soprano solo in Haydn’s oratorio The Creation. Her marriage was dissolved in 1912.

Finally in Dresden, she received the information that the ensemble there was alas already complete. However, Berlin, that had just lost its main attraction, signed a favourable contract with her and allowed her to make her debut as the page in Les Huguenots. For five years, from 1910 until 1914, she had fairy-tale successes. Under Leo Blech she sang Susanna in Mozart’s Le nozze di Figaro, under Karl Muck she sang the Queen of the night in Die Zauberflöte and under the composer Richard Strauss she sang Zerbinetta in his opera Ariadne auf Naxos. In Berlin, she was also able to make her recording debut, and made about 50 recordings, mainly for Deutsche Grammophon AG but also Parlophon and Pathé, which explains why there are two productions of the Queen of the night’s arias and three of the waltz aria from Gounod’s Romeo et Juliette.

After the outbreak of war in 1914, her records were unsaleable since she was now regarded as an enemy and as such was in immediate danger for her life. The Opera director sent her to Sweden on a guest appearance. She herself wanted to visit her house in St Petersburg and after the concert in Stockholm she undertook the tiring and uncomfortable train journey via Haparanda and Helsinki, where in the spring of 1915 she sang Delibes’ Lakmé. She spent the summer in Kuokala, where she had stayed as a child, and then visited St Petersburg, where she felt uncomfortable, especially since she had been called »Kaiser Wilhelm’s darling«. She therefore decided to leave her homeland and travel the long distance back to the Stockholm opera and her five contracted evenings.

The first was Rossini’s Il barbiere di Siviglia in the autumn of 1915 when she surprisingly smuggled in the Clock aria from Lakmé into Rosina’s singing lesson. Figaro was sung by Martin Oscàr, who a few months earlier had lost his wife Anna Oscàr. She had been the leading coloratura star at Kungliga Teatern for decades. The conductor that evening therefore grabbed the opportunity of prolonging the cooperation with Adeleide von Skilondz with several performances after Christmas. As an unknown, visiting coloratura singer, she took the audience by storm. In the spring of 1916, she appeared in 31 performances, always for sold-out houses to which the audiences were fighting for tickets.

In January 1917, the premiere took place of the André production of Mozart’s Die Zauberflöte with Adeleide von Skilondz as the Queen of the night, that she sang on 64 evenings. It topped the list of her in sum twelve opera roles sung in Stockholm. Violetta in La Traviata and Gilda in Rigoletto came second and in shared third place were Elvira in Auber’s La muette de Portici and the title role in Delibes’ Lakmé. The three soprano roles in Les contes d’Hoffman, Philine in Mignon, Marguerite de Valois in * Les Huguenots , the title role in Manon and Tatyana in Eugen Onegin* also deserve mention.

Taken altogether, she sang on 252 evenings at the Stockholm Opera up until January 1924. She was rewarded in 1917 with Litteris et Artibus. In 1921, she was elected as a foreign member of the Royal Swedish Academy of Music, but in 1930 she was made a Swedish member after having become a Swedish citizen.

The list of appearances with symphony orchestras number only a handful during the period 1916–1925 and on the radio she only sang in 1925. She made some return visits to Berlin, Dresden and Helsinki and was also a guest singer in Czechoslovakia, France and England before 1931. For friends and associations, she continued both singing and playing the piano right up until 1943.

In 1926, Adelaide von Skilondz wrote a new chapter in her history, this time as a voice teacher. In the newly built Konserthuset in Stockholm, she presented ten of her pupils at a concert in the small hall, with a performance of Offenbach’s one-act operetta La Chanson de Fortunio, set up by herself. During the first world war, she had opened her large, beautiful apartment in central Stockholm to Russian refugees who had to sleep on the floor, and from 1922 she had received her voice pupils there. In September 1939, the employers’ association confiscated it, after which she moved to an even bigger apartment at Strandvägen 31. In her new apartment, she was able to receive 250 guests in her salon, where there was one of the three portraits of her painted by Ilya Repin, and where as Madame she was able to carry on her private lessons. During the years, she had many pupils, including Kjerstin Dellert, Kerstin Meyer, Isa Quensel, Gaby Stenberg and Elisabeth Söderström, all of whom later made names for themselves.

When Adelaide von Skilondz no longer had the energy to teach, she was taken care of by her sisters Katja and Selinka who had emigrated after Stalin’s death, and also by the former ASEA engineer Nikolej Soloviev, who, after her peaceful death in 1969, made pilgrimages to her grave in the Woodland Cemetery in Stockholm, always with fresh flowers. 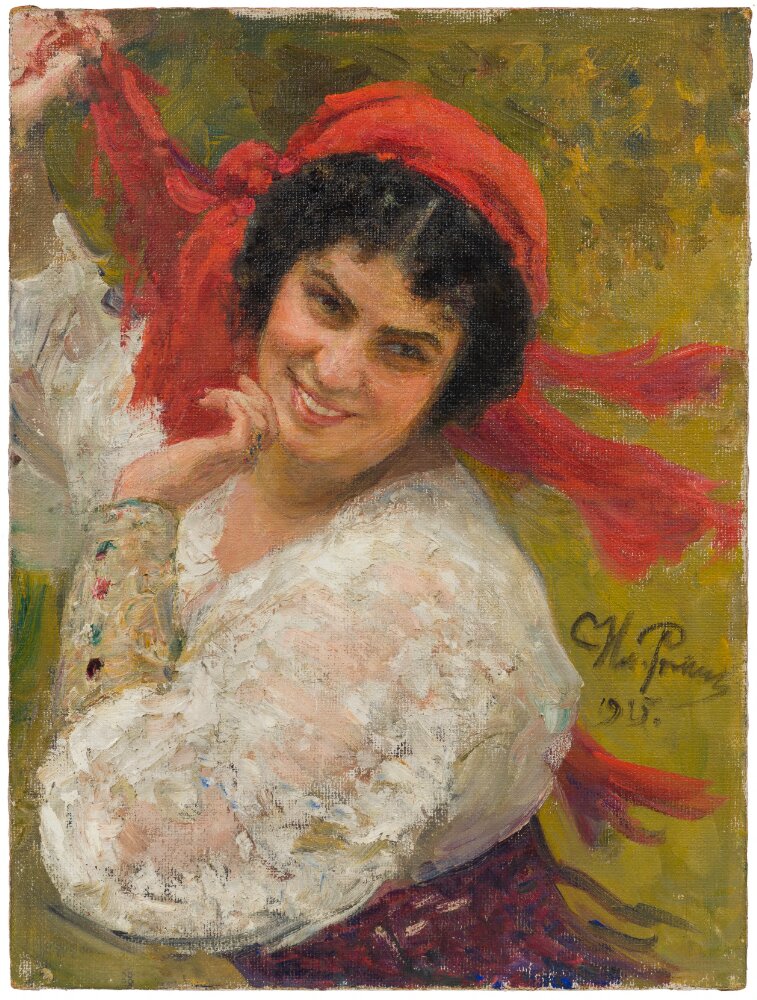