Agda Montelius’ activities brought two sides of the most pressing questions of the late 1800s and early 1900s together: the women’s movement and issues centred on welfare and poor relief.

Agda Montelius was born into an upper-class milieu with access to moneyed social and cultural capital. Her father, Fabian Reuterskiöld, was a soldier who served as a government minister in the 1860s. Her mother, Charlotta Schenström, came from a factory-owning family. Agda Montelius had two older brothers and a sister who was ten years her senior, to whom she was very close. The family moved frequently due to her father’s job. During Agda Montelius’ youth the family lived in Stockholm, where she attended the reputable Hammarstedt girls’ school. The subjects she received instruction in included modern languages and drawing, skills which she would make great use of in future years as she accompanied her husband as his “indispensable assistant” on his study trips to Europe.

When she was 21 years old Agda Montelius married Oscar Montelius, a man with a doctorate who was seven years her senior and in the employ of Statens historiska museum (later Historiska museet). The couple moved into one of the apartments in the Montelianska house on Södermalm, Stockholm. According to Sif Bokholm’s biography of Agda Montelius it seems that Agda developed her interest in the women’s movement and social matters when she became a member of the Montelius family. Bokholm particularly emphasises the influence which Oscar Montelius’ mother Clara had on Agda Montelius. Clara had for a many years been involved in the poor relief provided by her home congregation, which was run through the Stockholms fruntimmersförening (women’s society), initially set up by Fredrika Bremer. It was the insights that Agda Montelius gained by meeting, through these organisations, a lot of people who could testify to the conditions of the poor that provided the basis for her later work. Following Fredrika Bremer’s approach the family and the home were viewed as the fundamental social unit and thus efforts were initially directed towards what was considered to be the centre of the home, namely mothers. It was important to provide women, in particular, with an income and thereby an element of independence, and this was mainly achieved through organising sewing as a cottage industry. Agda Montelius’ guiding perspective in undertaking her social efforts was thus revealed: to, firstly, focus on women’s development potential by helping them to help themselves, as well as obtaining women’s emancipation in order to achieve a fair society.

Agda Montelius represented what can be characterised as difference feminism, namely the view that women’s characteristics and experiences were different from those of men. She believed that these differences should be viewed in a gender-complimentary manner and that women were best qualified for caring for both the home and children. Failing to make use of these good qualities and skills within society as a whole would be a great waste of the good forces which could improve society. That which benefited women thus also served as a benefit to society as a whole.

In Stockholm the social deprivations were obvious. Within the liberal bourgeoisie which Agda Montelius belonged to several different organisations and networks were set up focused on philanthropic works. Agda Montelius was not infrequently placed in a position of leadership within the aforesaid groups, committees, and societies, and thereby she gained an extensive network of contacts. She argued the case for reducing discretionary and short-sighted forms of philanthropy. Instead she felt there should be cooperation between official poor relief, private organisations, and individuals, with an emphasis on long-term, well-structured and well-organised efforts. Agda Montelius often held important positions such as coordinator and more often than not she was able to put forward proposals for practical efforts using diplomatic compromise. This was the case, for example, within the Centralförbundet för socialt arbete (CSA) (central confederation for social work), the Föreningen för öm och sedlig mödravård (society for tender and proper maternal care), and the Svenska fattigvårdsförbundet (SFF) (Swedish poor relief confederation) within which she inhabited leading positions. However, her greatest impact came within two particular societies: Föreningen för Välgörenhetens Ordnande (FVO) (society for regulating charity) and Fredrika-Bremer-Förbundet (FBF) (association).

FVO, a religious and politically unaligned organisation, was set up in 1889 and Agda Montelius was one of its founding members. The following year she became the director of its central office. She took inspiration from both Germany and England, and particularly from the Charity Organisation Society (COS), which represented a so-called scientifically-based philanthropy allegedly resting on an objective, rational, and professional basis. One weighty consideration for FVO was to generate cooperation between different aid organisations offering municipal poor relief, societies, and private volunteers. There was a great need for a coordinated and systematic support system: official poor relief was limited and, as Sif Bokholm has written, there were “ca. 800 societies, foundations, clubs etc. in Stockholm alone all dealing with charity”. This produced a chaotic and almost accidental form of charity. Another basic approach was that any support provided should be appropriate to the individual situation of the person in need and that the support should take a long-term perspective, aimed at self-help. This could be realised by developing a personal relationship between those in need and those providing assistance. The goal was for the person in need to be given the opportunity to work their way out of their vulnerable position and become self-sufficient. Examples of these types of assistance include financial loans, setting up a cottage industry of sewing for retail, and organising training options for the unemployed. Particular support was also to be directed towards children and their particular needs, such as raising the alarm about unsafe environments and arranging visits to healthier areas in the countryside. Agda Montelius served as the FVO’s director for nearly 20 years, and her role entailed planning, being in charge of all her colleagues, cooperation, visiting those in need, and documenting this, all the while collaborating with and gaining expertise from other organisations and authorities. She spent four days a week doing this and from the very outset rejected any form of remuneration.

Agda Montelius believed that poverty would never be fully eradicated and that society would never become a ‘good’ society if women did not have the same civil rights as men. That was why she combined her anti-poverty efforts with working for the emancipation of women. A public swing toward female emancipation began to emerge toward the latter-end of the 1800s. Fredrika-Bremer-Förbundet was one of the driving forces in this, given that its aim was to strengthen women’s social, economic, intellectual, and ‘moral’ standing. Its first chair was the national archivist Hans Hildebrand. Agda Montelius was also a founding member.

Agda Montelius was whole-heartedly supported by her husband in her efforts on behalf of the emancipation of women. As early as 1888 Oscar Montelius gave a talk to the members of Fredrika-Bremer-Förbundet entitled “Huru länge har qvinnan betraktats som mannens egendom?”. He sought to provide a historical background to the current social position of women and his presentation gave a good insight into views of future developments and the necessary demands for emancipation. Fredrika-Bremer-Förbundet came to cover a broad spectrum of efforts. The most important elements to allowing women to become an equal member of society to men were information and opinion-forming, education and opportunities to play a role in society, and to a large extent this was delivered through the organisation’s journal. For the first few years Tidskrift för hemmet, which had been set up in different circumstances, served this purpose but within two years the journal Dagny was established, which changed its name to Hertha in 1914.

One of the defining issues for women’s equality was suffrage. Demands for women’s suffrage rights had arisen in various places across the globe, including the USA, Great Britain, and the Nordic countries, during the second half of the previous century. In 1899, on the second-last day of the year, Agda Montelius along with the director of the Fredrika-Bremer-Förbundet offices handed in a petition to the prime minister demanding women’s suffrage. Although the petition was literally placed in a drawer this did not put an end to the campaign which gained ground with the support of further organisations. In 1903 a variety of groups, including Fredrika-Bremer-Förbundet, formed the Landsföreningen för kvinnans politiska rösträtt (LKPR) (national association for women’s suffrage) and took on the main responsibility of running the campaign. In September 1921 women were allowed to vote for the first time. Although Agda Montelius lived long enough to see the decision on women’s suffrage as well as the right for women to stand for election come to pass, she herself was never able to participate in an election.

Agda Montelius died on 20 October 1920. She is buried next to her husband at the Norra cemetery in Solna. The funerary monument, which was erected about 10 years later, is a pastiche of a 5 000-year old stone-chambered grave. The inscription rightly celebrates Oscar Montelius’ contributions to the field of archaeology. There is, however, nothing noted about Agda Montelius’ major efforts towards societal improvements and, in particular, on behalf of women’s positions within society. 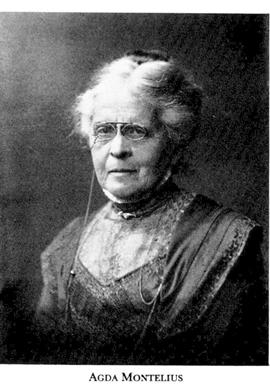