Ambassador, Permanent Representative of Sweden to the UN

Agda Rössel was the first woman to be appointed to a permanent director’s post at the United Nations. As a director she was able to make pioneering contributions on behalf of human rights, with a focus on women and children, in areas such as sexual and reproductive rights and in opposition to genital mutilation and the death penalty.

Agda Rössel broke down class barriers and was the embodiment of Sweden’s image as a land of possibilities. She grew up in a poor but politically aware working-class family in Gällivare. After a forced suspension of her nursing studies in Kalix and Boden she subsequently graduated, in 1939, from Institutet för socialpolitisk och kommunal utbildning och forskning (the institute of social welfare and municipal training and research) in Stockholm. She continued her studies whilst working as an assistant at a ladies’ hairdressers in order to become eligible to go to college. She then made a career for herself within the trade unions and public administration. She began as an assistant personal consultant for the Stockholmsdistriktets allmänna restaurang aktiebolag (SARA) (the Stockholm distric public restaurant company) and then became the ombudsman for the Kvinnliga Telefontjänstemannaföreningens Centralstyrelse (female telephone operators’ association’s central board) and during the final years of the war she served as an emergency response consultant for the Stockholm employment authority. At the same time she had become a member of the TCO’s board and executive committee. After the war she worked in Arbetsmarknadsstyrelsen (national labour market board) where she ended up as higher executive officer.

When Agda Rössel was appointed to the United Nations’ General Assembly in 1952 she was the first woman to have achieved such an advanced position within that organisation. She had already been director of the international section of Rädda Barnen (Save The Children) and had served on the board of Svenska Europahjälpen (Swedish aid for Europe). During 1951–1953 she had worked as the Swedish representative on the United Nations’ commission on human rights and, from 1954–1958, she had been a member of the United Nations’ commission on women’s rights. She was also the deputy chair of the Swedish UNICEF committee. At this time she was divorced and a single mother of two young children. She had previously, from 1943–1951, been married to the author James Rössel.

The new ideas and contacts that Agda Rössel gained from important figures and networks within the women’s movement were of great importance to her future career. She was the chair of Yrkeskvinnors Samarbetsförbund (career women’s collaborative association) from 1948–1952 and vice-president of the International Federation of Business and Professional Women from 1954–1956. A variety of influential and controversial Social Democratic party women joined Yrkeskvinnors Samarbetsförbund, including Alva Myrdal, Inga Thorsson, and Ulla Lindström. They were all part of Agda Rössel’s closest circle of friends and championed disarmament, decolonisation, foreign aid, and wider engagement by the United Nations.

An ambassador must be able to form good and lasting relationships with those individuals who can supply the most relevant local information in order to be able to judge the situation in the country of their posting. Agda Rössel was able to deal with people at all levels and forged ties with leading figures and a variety of diplomats through the professional and warm hospitality she provided at her residence and at the embassies. She was thus a very well-informed and up-to-date observer of each

country that she worked in. She was much-noted for her factual and scrupulously prepared diplomatic reports. An example of this is when she prefaced one of her reports to the Swedish Foreign Ministry with a prediction that following the death of Tito the republic of Yugoslavia would break up.

Intellectual curiosity was a driving factor for Agda Rössel, beginning with literature, reading, and languages – all of which she put to good use in diplomatic service by thoroughly researching each of her host countries. She read everything she could get her hands on about the population, the history, and the culture of each country she was posted to, and she travelled extensively in order to meet ordinary people and experience how they lived.

Agda Rössel developed a sense of international empathy during her time in Arbetsmarknadsstyrelsen as she had worked with Swedish refugee centres. Her meetings with refugees and people who came from a range of war-ravaged and crisis-ridden areas had left a lasting impact on her. She became known for being particularly concerned with the humanitarian aspect to the selection of refugees to be taken in by Sweden and proposed the initiative that even those suffering from tuberculosis should be accepted.

Agda Rössel’s courage and integrity came to the fore whenever she was engaged in what was, at that time, considered to be controversial issues, such as when she campaigned against genital mutilation and against the death penalty. The question of the death penalty eventually became a resolution of the United Nations’ General Assembly and an enquiry followed. Although it took time for it to become a convention she still brought the matter to the table. The issue of genital mutilation of girls faced a lot of opposition and was only actively considered after she had left the United Nations. She also helped to get other sensitive issues – such as maternity care, family planning, and sexual education – included in the United Nations’ agenda.

That Agda Rössel had mastered the difficult skill of presenting herself as impartial towards the country she was working in was confirmed in her appointment as the Swedish Foreign Ministry’s external expert on dictatorships. Her first case was Tito in Yugoslavia, followed up by the Communist dictatorship in Czechoslovakia, and the military junta in Greece. She formed a network of friends in Greece which extended beyond the official spheres and was constantly in touch with the opposition. She performed normal diplomatic work and maintained a dialogue with the Greek government in order to try and bring issues regarding democracy to the fore. At the same time she quietly collaborated with a kind of underground enterprise, allowing her official residence to serve as a refuge for the democratic opposition movement. She apparently did this on the instruction of the Swedish government and in accordance with Swedish foreign policy.

It was no easy task to serve as a diplomat in countries which were run by dictators. Agda Rössel has described her time in Czechoslovakia as the most difficult period of her career. On her retirement in 1977, following 18 years’ service as an ambassador, she gave a newspaper interview revealing how psychologically burdensome it had been to work with the Czech government whilst also seeing how arbitrarily those who thought differently were treated.

Retirement brought an end to her diplomatic career. She then spent several years working as a consultant to the Swedish Trade Council.

Agda Rössel died in Stockholm in 2001. She is buried at the Norra cemetery in Solna. 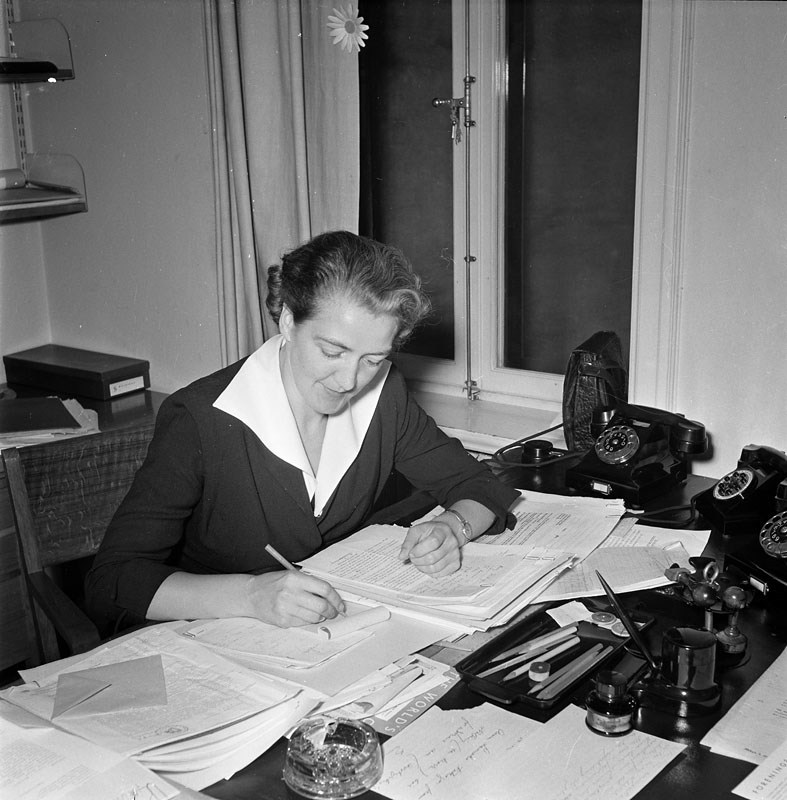