Annie Wallentheim was a Social democratic party parliamentarian who was particularly supportive of the weakest members of society.

Annie Wallentheim was born in Stockholm in 1902. Her parents were Arvid Hansson, a railroad worker, and his wife Wilhelmina. She had a sister named Elsa who was seven years her senior. Not much is known of Annie Wallentheim’s childhood years but it is likely that her education did not extend beyond basic public school.

In 1918, then aged 16, Annie Wallentheim began her working life as a shop assistant. She married Adolf Wallentheim in 1924. Her husband was politically active and served as the chair of Sveriges Socialdemokratiska Ungdomsförbund (SSU, Swedish Social Democratic Youth League). Later he became a parliamentarian, representing Stockholm county constituency. Annie Wallentheim became a member of the Social democratic party at an early stage and she also joined its women’s association.

Annie Wallentheim gave birth to her daughter Karin just a year after getting married. In quick succession she had another three daughters who were named Barbro, Gunnel, and Inga. Annie Wallentheim was active in municipal politics in Nacka, where she held various local positions during the 1930 to 1954 period. She was an energetic woman who was full of ideas and was given many important posts. She served as chair of the women’s district from 1939 onwards for a ten-year period, she sat on the board of the party’s women’s association as well as on the party executive. She sat on the county council from 1939 to 1962. She was also involved in the directorate of the hospitals Centrallasarettet and Allmänna BB (maternity care unit).

Annie Wallentheim had a zeal for justice and solidarity. She believed it was very important to get women involved in the practical work of influencing developments. She was on the committee for the 1941 national enquiry into household and family matters and she championed the need for childcare so as to allow women to join the labour market. She contributed submissions to the journal Hertha, including a polemical article entitled “Vi behöver bostäder i mängd”. During the war years she was behind the provision of free medical care for children between the ages of 2 and 6. This was a group which had previously not benefited from social healthcare.

In 1952 Annie Wallentheim entered the first chamber of the Swedish parliament as a representative of Stockholm county and Uppsala county constituency. Although her husband Adolf died the following year the newly widowed Annie Wallentheim nevertheless carried on working. She was a member of the board of Sveriges Radio and chair of the board of Hornö yrkesskola (vocational school), a school in Enköping for “maladjusted” girls aged between 15 and 18. Annie Wallentheim proposed that men should not be prevented from working at schools and at boarding homes, such as “correctional behaviour institutes” and Eugeniahemmet, where there was a need for male role models.

Annie Wallentheim was active, along with fellow party members Nancy Eriksson, Gunnel Olsson, and Inga Thorsson, in the 1950s campaigns against plans for nuclear weapons in Sweden. For a time she was a member of Nacka council and treasury. She also served on the family advice provision enquiry, served as chair of the 1958 children’s institutions enquiry, and she served as an expert on youth crime issues. She was a member of Försäkringskassans board, was actively involved in Save the Children, and she served as deputy chair of the parliament auditors until her retirement in 1970.

Annie Wallentheim was said to be a good agitator but she was also a skilled listener. She can be seen as typical of the parliamentarians who, whilst not particularly well-known to the general public, nevertheless worked continuously to improve society and who played a part in developing the democratic welfare state.

After retiring Annie Wallentheim resigned from her many association roles and spent her final years quietly. She died in Kinna in 1990 aged 88. Annie Wallentheim’s remains lie at Nacka northern cemetery. 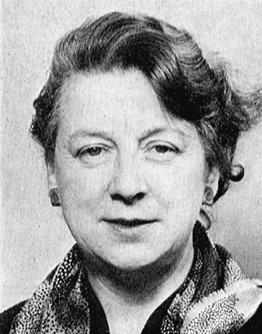