Agnes Lagerstedt is primarily known for her contributions to social housing within Stockholm’s slum areas during the 1880s and 1890s. She was one of the founders of the housing company AB Stockholms Arbetarehem which built homes intended mainly for working-class families.

Agnes Lagerstedt was born in Askersund, but grew up in Karlstad. Her father was the district medical officer. Of her many siblings it was her elder brother Nils to whom she was closest. He encouraged her in her efforts to become a school-teacher and in her social welfare activism.

Agnes Lagerstedt arrived in Stockholm in the early 1880s in order to take up a job as a public school teacher at Hedvig Eleonora school in Östermalm. By making home-visits she gained a frightening insight into the misery of many of her pupils, including malnourishment, overcrowding, and unsanitary living conditions. She decided to do something about it. In order to improve the children’s health she set up a school camp at Häverö parish in Roslagen. She ran this camp – the first of its kind in Sweden – during the period 1884–1892. She also expanded this enterprise by ensuring the establishment of Stockholms skollovskoloniförening (school-holidays camp association) in 1885. This enabled thousands of Stockholm children to improve their health by spending their summers in the countryside.

However, Agnes Lagerstedt wanted to improve things further for Stockholm’s working-class population and this primarily entailed their housing conditions. Housing standards for these people were amongst the lowest in Europe at this time. In 1889 Agnes Lagerstedt travelled to London with funding from the Lars Hierta Memorial Foundation in order to learn how housing improvements for the working classes had been implemented there. The philanthropists Octavia Hill and Emma Cons were in charge of this course.

Upon Agnes Lagerstedt’s return to Sweden she applied for the vacant post of superintendent in one of the worst slum areas of Stockholm at Nybergsgränd (now Nybergsgatan), bordering on what was then the outskirts of the city, Ladugårdsgärdet (now Gärdet). This residential area was close to the Hedvig Eleonora school. She got the job and one of her first actions was to introduce a code of conduct, including a ban on sub-letting in order to end overcrowding. Her next step was to establish the AB Stockholms Arbetarehem company with the aim of building sound and fit for purpose homes for the working classes. These were built in 1892. She was able to convince several high-ranking people, including some from the royal family, to take an interest in this limited company. One of those who actively supported her was Oscar Hirsch, a businessman who like her was keen to improve housing standards for the poor in Stockholm. He provided the company with its seed capital and from 1893 he served as the company chair.

Two new residential buildings were completed in 1893 in the Storken area of Stockholm, between Sibyllegatan and Jungfrugatan. This housing project was a financial success. Oscar Hirsch and the other share-holders had their loans repaid. The mix of residents – particularly families with children where both parents earned low but full-time wages – meant that the rental income was steady and the loans were repaid in full.

Later, during the 1890s, yet another two buildings were erected very close to the first buildings. By the end of the 1890s there were 660 people living in the 142 apartments within these buildings. These were all small apartments mainly comprising a single room and kitchen, with cold running water and a sewage system, supplied with a pantry, a closet, and cellar and attic storage space. The yard buildings housed a common laundry-room, baking area, bathing area, and outhouse. This was viewed, at that time, as modern housing which was fit for purpose for the working classes.

There was only one three-room apartment where the superintendent herself, namely Agnes Lagerstedt, lived. One of the rooms served as her office. Next to the apartment there was a communal area and a library. Here sewing bees were held, as well as lectures and Sunday schools. Further activities occurred as needed, such as daytime childcare centres, kindergartens, and benefits association meetings. The area also contained a shop, established along cooperative lines.

Thus Agnes Lagerstedt lived and stayed amongst those she sought to benefit. This was in accordance with the idea of the Christian ‘settlement’ movement (known as hemgårdsrörelse in Swedish) which gradually spread across the Anglo-Saxon world in the late 1800s and reached Sweden around the turn of the 1900s. This entailed engagement across class divisions and a transfer of knowledge and education in the aim of generating a sense of diligence and responsibility amongst the working classes. Inspired by this, Agnes Lagerstedt undertook largely pragmatic efforts and generated a sense of trust, earning her the respect of those in the network of philanthropists she belonged to as well as amongst those she sought to help. Her network included the likes of Anna Hierta-Retzius, well-known for her children’s day-care centres (similar to the modern ‘fritidshem’), and from the early 1900s Centralförbundet för Socialt Arbete (CSA) (national association for central welfare). Agnes Lagerstedt, like many philanthropists, had deeply-held Christian beliefs.

By the 1930s the Stockholms Arbetarehem had built about another ten residential buildings in Stockholm city centre. However, the original building standards were already obsolete at this point. Outhouses were replaced by water closets within the apartments whilst electrical supplies were also provided. The philanthropic concepts which Agnes Lagerstedt worked under had also become irrelevant.

There is a street named after Agnes Lagerstedt in Fruängen. Those buildings erected by AB Stockholms Arbetarehem in the Storken area are now listed buildings.

Agnes Lagerstedt died in 1939. Her grave lies in the Västra cemetery in Stockholm. 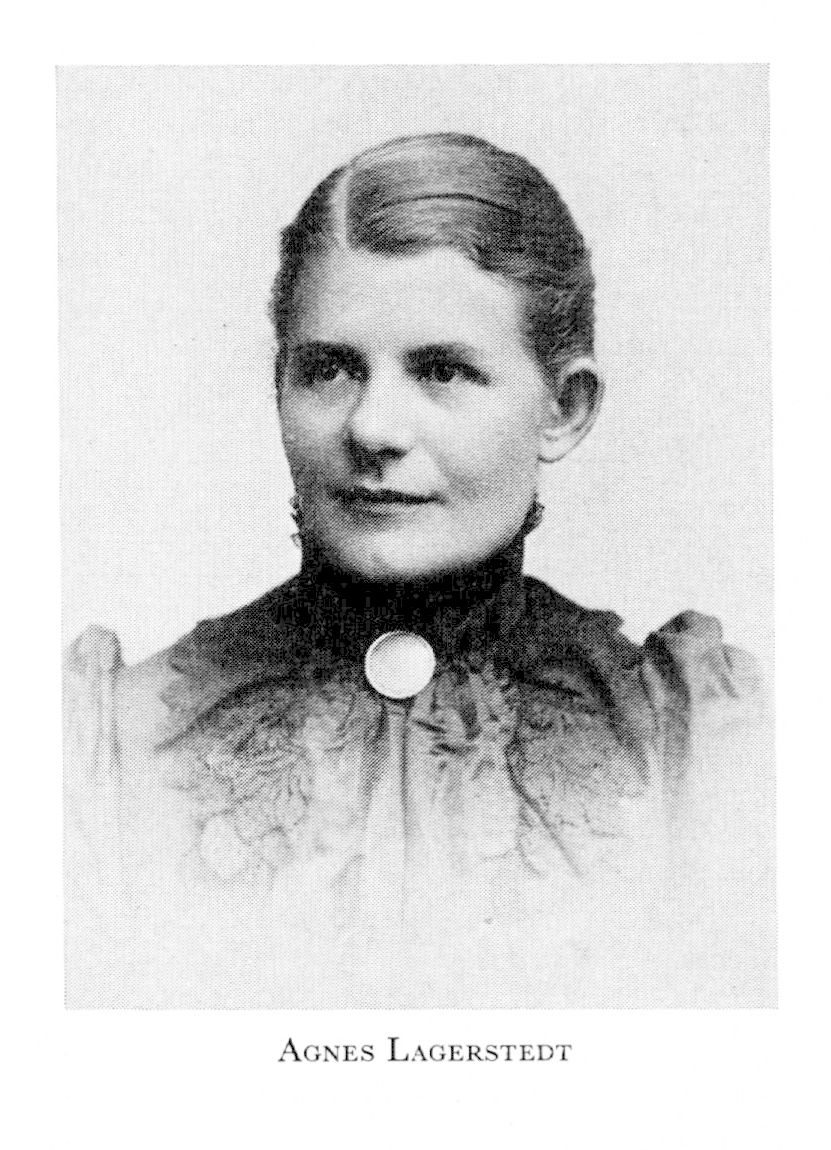