Alma Åkermark was, from 1886–1889, the editor of Framåt, the first Swedish cultural radical women’s journal.

Alma Åkermark was born at Stora Hässleröd in the Bohuslän parish of Forshälla. She was the eldest of six siblings. Her parents were Axel Wilhelm Åkmark, a farmer, and his wife, Anna Stina Christensson. Her father later ran a manufacturing business in central Gothenburg, the city where Alma Åkermark received her initial education. Subsequently she was sent to a well-known girls’ school in Halmstad, run by Kristina Sjögren. Alma Åkermark’s mother died young, after which her father married Kristina Sjögren. He then fell seriously ill and passed away when Alma Åkermark was 16 years old. At that point the family was nearly destitute and her step-mother faced a real struggle to provide for the family’s needs and give the children a proper environment to grow up in.

The Åkermark family’s close friends included S. A. Hedlund, a radical liberal and chief editor of the Göteborgs Handels- och Sjöfarts-Tidning newspaper, and his family. They funded Alma Åkermark’s education in Neuchâtel, Switzerland. There she studied music and painting, amongst other things. She returned to Gothenburg after a couple of years and continued her studies. Alma Åkermark then gained employment as a teacher at the Slöjdföreningen (handicrafts society) school and at the Fruntimmersföreningen (women’s society) girls’ school.

Alma Åkermark became involved in the women’s movement at an early stage. She joined Göteborgs Kvinnoförening (Gothenburg women’s society) upon its establishment in 1884. The following year she was elected onto the society’s board, whose chair was Mathilda Hedlund. This Gothenburg society was of a decidedly radical left-wing liberal tendency and was significantly more radical than, for example, the Fredrika-Bremer-Förbundet (association) which had been established in the same year. When the Gothenburg society decided to start publishing a journal Alma Åkermark was appointed as editor. At that time she was 33 years old.

In addition to Alma Åkermark and Mathilda Hedlund the journal, called Framåt. Tidskrift utgifven af Göteborgs Kvinnoförening, was also run by the author Hilma Angered-Strandberg. The journal’s permanent motto was: “Döm ingen ohörd – Fri talan – Genom skäl och motskäl bildas övertygelse” (Judge no-one without a hearing – Free speech – Conviction is based on argument and counter-arguments). In order to ensure that it was accessible to working-class women and men the journal was sold at a low price. Although it was a culturally radical and left-wing liberal publication it also provided a forum for writers of a socialist and deeply conservative persuasion. Open discussion remained of utmost importance. Almost every single member of the somewhat hard-to-define 1880s generation of writers and polemicists – particularly the faction known as Det unga Sverige – were given a forum in Framåt.

Both the journal and Alma Åkermark came to play a definitive role in the great morality debate of the era. The focus was on marriage and sexual morality and the main discussion occurred between those who believed that sexuality should be freed from the limitations of marriage, namely “free love”, which was opposed by those who believed that both sexes should practise celibacy before marriage and remain monogamous once married. The debate involved the majority of prominent authors and cultural figures. Alma Åkermark provided space for all views to be expressed in the journal. This led her into conflict with the Fredrika-Bremer-Förbundet in Stockholm and its leading figure, Sophie Adlersparre (writing under the byline of Esselde), who feared that the entire women’s movement would be damaged by the journal’s approach.

Alma Åkermark’s difference of opinion with Sophie Adlersparre impacted negatively on her life and work, after Alma Åkermark decided to publish a short story written by Stella Kleve (a pseudonym for Mathilda Malling) entitled “Pyrrhussegrar”. The story tells of a young, terminally ill woman who is destroyed by the fact that she could not act on her sexual impulses, being instead forced to limit herself to flirting and superficial social interaction. Alma Åkermark had hoped that “Pyrrhussegrar” would generate a scientific and psychological debate in Framåt. However, Sophie Adlersparre reacted by penning a heavily condemning article which she not only published in her own journal, Dagny, but also in the Göteborgs Handels- och Sjöfarts-Tidning and Göteborgs-Posten newspapers. She accused Stella Kleve of being guilty of “en quinlig strindbergianism af det mest förnedrande slag” (a feminine Strindbergianism of the most degrading nature). To read Kleve’s short story was, in her words, “vidrigt och gagnlöst för ärbara svenska qvinnor” (disgusting and pointless for honourable Swedish women), and she claimed that the story was the product of “en depraverad och vanslägtad fantasi” (a depraved and degenerate imagination). Adlersparre did not limit her accusations to Stella Kleve and Alma Åkermark but extended her condemnation to the publisher, Göteborgs Kvinnoförening, which she felt should have had better judgement and a sense of responsibility which would have prevented them from publishing the short story.

Despite Alma Åkermark’s erudite defence and her usual appeal for freedom of expression this attack had a ruinous impact on both her and Framåt. The unease spread to Göteborgs Kvinnoförening who decided to end their involvement in Framåt. Nevertheless, the journal fearlessly continued to publish, maintaining the same agenda and retaining the same staff. Following the enacting of an advertising and subscribers’ boycott, however, the journal’s financial situation became dire. After three years’ worth of issues the story of Framåt was over.

Alma Åkermark was also fired from her job as a drawing instructor following the boycott of Framåt and she and her husband then moved to Stockholm. She had married Albert Breinholm, who worked for Det Store Nordiske Telegraf Selskab, in 1887. He too had worked at Framåt. When he was transferred to Finland the couple settled in Nystad. He was offered the position of editor for an up-and-coming weekly but Albert Breinholm developed consumption and died in 1891. Alma Åkermark was then struck down by mental illness which resulted in her being hospitalised at the Hökälla mental hospital near Göteborg from 1892–1893.

In 1896 Alma Åkermark immigrated to north America as one of her brothers was already living there. She earned a living by taking on a variety of jobs, giving drawing lessons, and creating patterns for a textile factory, but she eventually went blind and had to return to Sweden in 1909. Despite her handicap she remained full of spirit. From 1910–1912 she lived at the Varberg inn and subsequently boarded for a long time with the inn-owner. During her final years Alma Åkermark lived with friends and relatives in Alingsås and Gothenburg.

Alma Åkermark died in 1933. She is buried at Östra kyrkogården (The Eastern Cemetery) in Gothenburg. 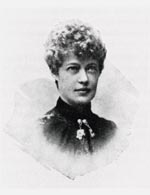