Alma Hedin was active in Stockholm municipal politics and in charitable efforts on behalf of the elderly and poor in society. She was close to her brother Sven Hedin, a travelling researcher and right-wing activist.

Alma Hedin was the daughter of Ludvig Hedin, a Stockholm city architect, and his wife Anna, née Berlin. Her father had worked his way up to the position of city architect. Her mother came from the well-known Westman brewing family. The large family of seven siblings were very tight and mutually supportive. This was facilitated by the fact that Ludvig lived to be 91 and his wife Anna lived to be 87. Further, Sven retained the parental home as a permanent base to which he returned in between his travels whilst Alma Hedin remained resident in the family home for her whole life. Neither of the two siblings ever married. Alma Hedin attended Brummerska skolan, which was a Christian-based private girls’s school. She also attended Wallinska skolan, similarly private and for girls only. She had to give up her hopes of becoming a nurse because of health problems. The first job she had within the sphere of social welfare was the year she spent working for the infant welfare association Föreningen Mjölkdroppen.

Work formed a cornerstone of her life, both within the home and outside it. Her sisters Gerda and Clara worked, respectively, in insurance and ran a shop. Alma Hedin herself served as the director of Stiftelsen Wilhelm Govenii Minne, a religious trust which constructed accommodation for impoverished workers living in Söder.

Alma Hedin was the second woman to be elected onto Stockholm municipal council in 1912, representing Allmänna valmansförbundet (later known as Högern, the right-wing party). She was not active within party politics herself but thanks to her championing of Christian beliefs and national defence she was entered onto the election list as a party candidate. To her great surprise she won enough votes to gain a seat on the council. She did not exactly devote herself whole-heartedly to political efforts, but she did raise three motions within the sphere of social welfare: 1) regarding the damaging financial (by increased debt) and hygiene (through second-hand clothing) impacts of pawn broking in 1812; 2) that a pay-raise of 300 kronor should be awarded to female teachers to compensate for the elevated war-time prices of 1916; and 3) regarding the “damaging influence on children” of cinemas in 1917. Alma Hedin was hardly a loyal party-worker. Sometimes she voted in support of the left (Liberals and Social Democrats) if she felt their proposals were better than those of her party. “It would never occur to me to vote against my own conscience and so I did not fit in with the immoral and stifling party system. It was impossible for me to align my sympathies according to party lines”, she recounts in I minnets blomstergårdar, 1950.

Alma Hedin realised that the political sphere was not the right forum for her personal ambitions and instead sought to serve a practical purpose. When dealing with accommodation offered through Govenii Minne there were times when she had to refuse elderly applicants because the foundation prioritised widows and impoverished families with children. The idea of establishing Blomsterfonden (flower fund for homes and care for the elderly) was a flash of inspiration, reflecting the late nineteenth-century technological concepts which evolved into major exporting companies.

Following the death of her father, in 1917, more than 90 floral wreaths arrived for his funeral. Some friends sent money instead, along with a card which said “For some of your poor instead of another wreath for Uncle’s coffin”. The idea of a beautiful card stating that a financial donation had been made for the benefit of the poor and homeless elderly appealed to Alma Hedin. The newly-founded association’s motto was: “Consider Blomsterfonden”. Thanks to her good connections amongst the wealthy of Stockholm society in 1920 Alma Hedin successfully obtained (with her brother Sven’s assistance) a chair for Blomsterfonden in the form of Governor Carl Hederstierna along with a number of well-known supporters: Prime Minister Hjalmar Branting, Anna Branting the journalist, Archbishop Nathan Söderblom, Anna Söderblom, the authors Ellen Key and Erik Axel Karlfeldt, as well as 15 county governors.

Alma Hedin served as the organisation’s secretary which was no simple task. It was difficult to find financers and sometimes a cloud of pessimism hung over the board. One bit of positive news came when the city gave the foundation a bit of land to use for free at Rödabergsgatan 1. This was later extended to include number 3 beside Sankt Eriksplan. In September 1925 a building which provided space for 150 tenants was completed. In addition to living accommodation healthcare as well as flower-planting activities were provided. In 1931 a second major construction project was begun to provide for 800 tenants at Ringvägen. This time association members also contributed their savings to allow this project to proceed.

Throughout her life Alma Hedin, and her family, played a supportive role in Sven’s undertakings. She accompanied him on several of his lecture tours. For example, in 1909 she travelled with him to England, Scotland, France, and Germany. These journeys were rarely instances of leisure. Alma Hedin handled the travel itinerary and also helped Sven with his intensive efforts to fund these journeys. She also managed her brother’s correspondence, both the letters he received and those he sent out. Sven, for his part, supported Blomsterfonden from its inception, using his travels in Asia as a drawing card for it.

The two siblings also shared their political networks, albeit Sven served as the external figurehead in this sphere. As conservatives they sought to avoid party politics and were not in favour of the success of the workers’ movement. During the 1914 peasants’ march the two siblings were given places of honour beside Västra valvet, outside a first-floor window of the royal palace. The king’s podium was positioned on the other side of the courtyard. Sven, along with Lieutenant-General Carl Bennedich, had worked out the king’s patriotic and anti-parliamentary speech. It is of little surprise that both Alma Hedin and Sven extolled the king and royal power.

What is more astonishing is their support of Germany under Adolf Hitler. This was not unusual within their social circle, but no-one else had the same access to Hitler and other Nazi dignitaries as Sven, and sometimes even Alma Hedin. Sven met Hitler for the first time in 1935 and then again in October 1939, when he and his sister travelled to Berlin in order to promote Finland’s cause. The siblings were also invited to Hermann Göring’s Carinhall residence. Sven once again travelled to Berlin in 1940, after which he reported to the Swedish foreign minister, Christian Günther, on his return. In the autumn of that same year his lecture tour once again headed to Germany and Alma Hedin and Anne-Marie, the daughter of their sister Anna, joined him.

After the peace of 1945, Alma Hedin and Sven were some of the very few Swedes who said farewell to the departing German representatives. Although the impact of the Jewish persecution seems to have generated an element of doubt amongst Germanophiles, it never, however, led them to completely abandon their support for Nazi Germany. The concept of anti-semitism was not initially a major aspect of the siblings’ mental framework, but, as time went on, it gradually became so.

Alma Hedin continued the social welfare work she had begun before the war. She remained on the board of Blomsterfonden and was its indisputable leader until 1949, at which point she retired, being 73 years old. Alma Hedin willed half of her wealth to the Sven Hedin foundation.

Alma Hedin died in 1958. She is buried in the Hedin family grave at Adolf Fredrik cemetery in Stockholm. 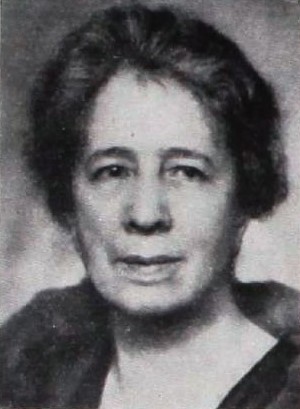