Amalia von Königsmarck was an artist and a poet.

Amalia (Emilie) Wilhelmina von Königsmarck was born in 1663. She grew up in Stade, Germany. Her mother Maria Christina Wrangel ensured that she and her sister Aurora von Königsmarck were schooled in dance, music and singing, and that they also learned French, Italian, Spanish, German and Latin. The death of their father, Conrad Christoph von Königsmarck, in 1673, resulted in the surviving family’s move to Hamburg, where they remained during the 1674–1680 period. They then moved to Stockholm in the hopes of accessing influential contacts in a bid to improve their financial situation. The women lived in the Swedish capital, where they formed part of the royal circles, from 1680 until 1692. Having initially lived at the Wrangel family palace on Riddarholmen, the family then moved into a building in Gamla Stan (Stockholm’s Old Town).

The sisters continued their education in the capital. They both received instruction in painting from David Klöcker Ehrenstrahl. Whilst her sister, Aurora von Königsmarck, preferred music Amalia von Königsmarck deepened and developed her artistic talents and also wrote poetry. She painted portraits and miniatures, including a portrait of her sister and one of Sophia Dorothea of Hanover. What stands out in Amalia von Königsmarck’s artwork is the multitude of self-portraits, as it was unusual for women to paint portraits during the Carolinian period in Sweden. Amalia von Königsmarck depicted herself in an allegorical self-portrait from 1689 holding a portrait of Queen Ulrika Eleonora the elder. In this image she underlines her role as artist by holding a bunch of paintbrushes in her right hand whilst her clothes and her jewellery indicate her elevated social status. A woman bearing a laurel wreath on her head – possibly her sister Aurora von Königsmarck appearing as “dawn’s goddess” – points at the easel and on the left there is Fama, goddess of fame, ready to sound her horn in honour of the queen and the artist.

Carl Gustaf Lewenhaupt had trained as an officer in France and after the wedding he wanted to enter into Swedish service. However, during peacetime there was no call for officers and so he entered into the duke of Hanover’s service instead. The family settled in Hamburg, where they spent many years. In 1695 Carl Gustaf Lewenhaupt transferred into the service of Prince Fredrick August of Saxony, who in 1697 was appointed king of Poland. As Carl Gustaf Lewenhaupt remained in Polish service after the outbreak of the Great Nordic War he then fell out of favour with King Karl XII of Sweden. In 1702 a trial began in Carl Gustaf’s absence at which he was accused of treason. Amalia von Königsmarck, who was in Sweden at the time, in vain sought to defend her husband. On 25 April 1703 the Svea court of appeal confirmed that Carl Gustaf Lewenhaupt should be forfeited of his “life, honour, and property”. He had, however, already died one month earlier and so it was Amalia von Königsmarck who owned the family’s Swedish property of Övedskloster and thus the court’s judgement could not be implemented.

There was little chance of appealing the verdict as long as King Karl XII was still alive but as soon as Queen Ulrika Eleonora the younger acceded to the throne Amalia von Königsmarck hurried to have the verdict overturned on her own behalf and that of her children. This came to pass in 1719.

Amalia von Königsmarck is an example of a talented and well-educated woman who was never able to fully realise her true potential. After marrying she experienced many pregnancies and gave birth to seven children – three of whom survived into adulthood – and was constantly on the move. All of these things are probably reasons as to why art never became a priority in her life.

Amalia von Königsmarck died in 1740. She was thus spared the sorrow of seeing her first born son, Charles Emil Lewenhaupt, condemned to death and executed for treason in 1743. 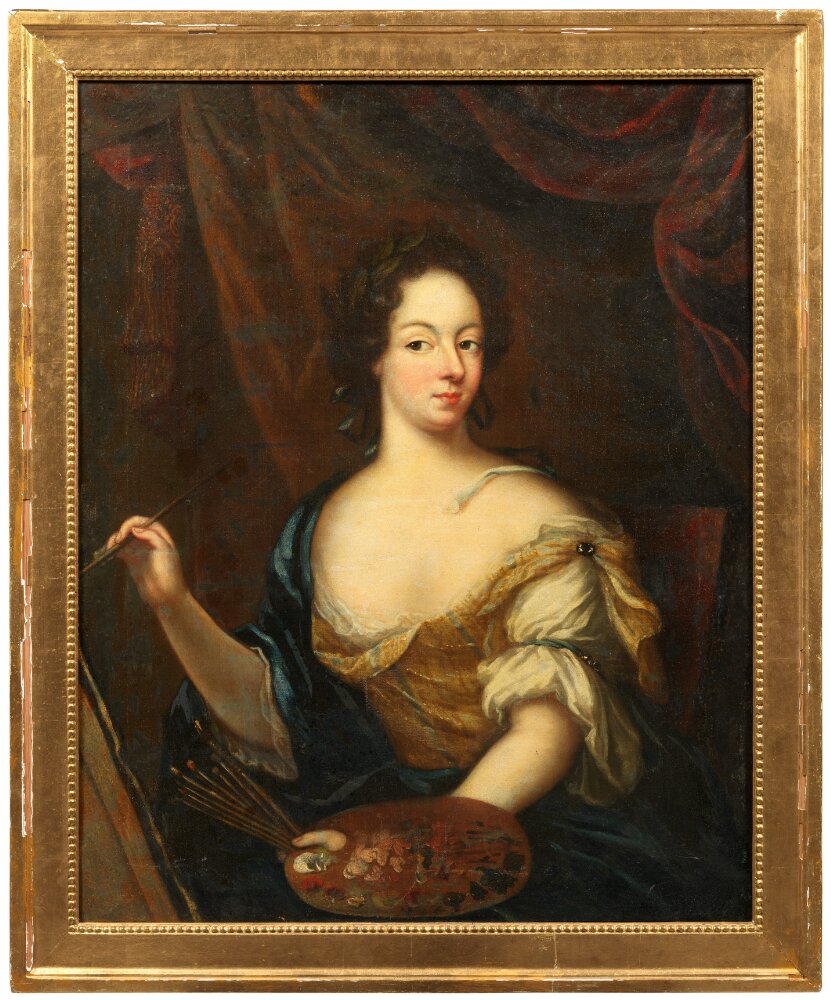