Amalia von Helvig was a German author, painter, art critic, translator and salon hostess who made significant contributions to the cultural mediation between Sweden and Germany in the first decades of the 1800s.

Anna Amalia von Imhoff, better known in Sweden as Amalia von Helvig, was born in 1776 in Weimar as the eldest daughter of Major Christoph Adam Carl von Imhoff, a baron, and his wife Louise Franziska Sophie von Schardt. Her father Carl von Imhoff was a well-known figure in Weimar’s higher social circles. After his service under Duke Carl Eugen of Württemberg, he had made a name for himself in London as a painter of miniatures and portraits. In 1769, he had travelled with the British East India Company to India, and had two sons with Marianne Chapuset (later married to the governor general Warren Hastings), before he married Louise von Schardt in 1775.

Amalia von Helvig’s mother Louise von Imhoff was part of an important cultural network, thanks to her older sister Charlotte von Stein. The latter was a lady-in-waiting to the Archduchess Anna Amalia of Saxony-Weimar, a composer and promoter of culture. Johan Wolfgang von Goethe was a close friend in their social circle. Amalia von Helvig was given a thorough education that was unusually broad for young noblewomen of her generation. It sowed the seed early on for her own literary and artistic activities. After having spent her first years on the family’s country estate at Mörlach near Nuremburg, where her father awoke her interest in painting, Amalia von Helvig was educated at a girls’ boarding school in Erlangen. After her father’s death in 1791, she moved back to her mother who had settled down in Weimar. Apart from the obligatory skills in singing and playing the guitar and pianoforte, drawing, needlework and modern languages with English, French and Italian, she studied portrait-painting, drawing and classical aesthetics with Heinrich Meyer, later director of the Weimar royal academy of drawing. She also studied classical Greek with the philosopher and author Friedrich Heinrich Jacobi.

Amalia von Helvig appeared as a poet for the first time at a masked ball at the court in Weimar in 1794, when she — disguised as a shadow — handed over an anonymously written poem of homage to Duchess Luise. Rumours about the poem’s author spread quickly at the court and even reached the ears of Friedrich Schiller, who encouraged Amalia von Helvig to continue her writing under his mentorship. During the following years, she was in regular contact with both Goethe and Schiller, who in letters and personal meetings encouraged her writing by reading and reworking her drafts, teaching her the art of verse-writing and giving her the opportunity to be published. In 1797—1798, several of her poems were printed under a pseudonym in Schiller’s magazines Horen and Musenalmanach. She was first published under her own name in 1800 when she appeared on the literary scene in Musenalmanach für das Jahr 1800 with an epic poem entitled Die Schwestern von Lesbos.

As lady-in-waiting to Duchess Luise, Amalia von Helvig participated actively in 1801—1803 in the social and cultural life of the court. She attended Goethe’s famous Wednesday meetings for a while (“Mittwochskränzchen”), broadened her cultural horizon by numerous visits to the opera, theatre and concerts, and also played roles in some of the privately staged performances of their plays by Goethe and Schiller. In 1803, she married the Swedish officer and Master-General of the Ordnance Carl von Helvig. After her mother’s death and the birth of the couple’s first child, Charlotte, Amalia von Helvig moved with her two younger sisters Marianne and Louise to Sweden in 1804, where her husband had already moved on account of his professional position as a military officer at the court of Gustav IV Adolf.

Amalia von Helvig tried at first to establish as rich a social and intellectual life in her new home town Stockholm as she had been used to from her time at the court in Weimar. She assembled the cultural personalities, scientists and politicians of the city every Friday for salon evenings in the family’s apartment, soon to be known as “Helvig’s blue salon”. Apart from her tasks as wife and mother to three children, she gave her time mainly to drawing and painting and was elected to the royal art academy: Kungliga Målar- och bildhuggarakademien. On account of her fragile health, which was not improved by the Swedish climate, she moved with her sisters and children back to Germany in 1810, where she settled in Heidelberg.

Both the political and literary climate had changed during Amalia von Helvig’s absence. Germany had suffered enormous losses against Napoleon’s troops, and large parts of the country had been occupied. Romantic currents with patriotic undertones competed with the classical school that had been dominant during Amalia von Helvig’s childhood and adolescence in Weimar. In the South German university town of Heidelberg, the centre of the younger generation of romantic authors, she soon found a door to intellectual circles. Her own literary creativity was also re-ignited which led to the publication of several works during the years 1812—1814. While she formally connected with her classically-inspired earlier works, for instance in the drama Die Schwestern auf Corcyra and the idyll cycle Die Tageszeiten in 1812, as well as the Swedish Systrarna på Corcyra in 1824, she gradually began to employ the forms and materials of her contemporary epoch in her literary works, influenced by her intensive studies of medieval painting. In this spirit, Amalia von Helvig wrote most of her contributions to the gigantic project Taschenbuch der Sagen und Legenden, a richly illustrated calendar in two parts, that she published in 1812 and 1817 together with the author Friedrich de la Motte Fouqué. In her tale Die Sage vom Wolfsbrunnen: Mährchen from 1814, she linked a South German theme of medieval knights with Scandinavian settings and elements from sagas.

Carl von Helvig, whose career had begun to stagnate after the state coup in 1809, hastily left his appointment and the family apartment in Stockholm at the beginning of 1816. Despite obvious marriage problems — Carl regularly got upset by Amalia von Helvig’s professional activities as a writer — she returned with her children to Stockholm in the spring of 1814 to spend two years sorting out her husband’s chaotic economy and to organise their move. During the spring of 1816 she also visited her friend Malla Silfverstolpe in Uppsala. Her stay in the university town with it romantic avant-garde and especially the intercourse with Erik Gustaf Geijer, whose lectures in history she attended, and the young Per Daniel Amadeus Atterbom became greatly significant for Amalia von Helvig’s future development. The intellectually so fruitful visit ended however with a deep personal tragedy when her son Bernhard died of scarlet fever in 1816. The shared experience with her Swedish friends of this grief and her son’s funeral in Uppsala strengthened Amalia von Helvig’s ties with Sweden and were to be decisive for her involvement in the mediation of Swedish culture to Germany.

After her return home to Germany in 1816, Amalia von Helvig settled down with her husband and son Bror in Berlin, where the couple eventually had two daughters. Amalia von Helvig held a salon in the family home, and it soon came to be an important gathering point in Berlin’s cultural life. In the salon, the various periods of Amalia von Helvig’s life were united, with Weimar classicism, Swedish romanticism’s literature and music and late German romanticism. The salon activities included reading aloud, discussions about new and already published works, art viewings and art criticism, philological conversations and music-making. The salon transcended style and art forms as well as city and national boundaries, which is also apparent from the guest list with many famous names. Among the visitors were authors, linguists, publishers, diplomats and military officers, other salon hostesses and not least her Swedish friends Atterbom, Silfverstolpe, Geijer och the composer Adolf Fredrik Lindblad. Her role as the provider of an introduction for Swedish travellers to Germany’s intellectual networks cannot be overestimated.

Apart from networking during salon evenings and an extensive correspondence, Amalia von Helvig gave her time and energy mainly to the active mediation of Swedish culture to German readers and writing art criticism. A planned more comprehensive work on Swedish culture and literature was never carried through. Her articles on Swedish art and separate translations of poems by Tegnér and Nicander as well as an introduction to Atterbom’s Lycksalighetens ö were on the other hand published in daily newspapers and magazines. Her greatest success as a translator was her interpretation of Esaias Tegnér’s Frithiofs saga, which she dedicated to Goethe. This translation became very popular and was eventually printed in several editions. In 1827, she also translated a collection of Swedish folk songs with music by Lindblad, Der Nordensaal. Eine Sammlung schwedischer Volkslieder.

Her own literary writing diminished during her final years in favour of her activities as a translator and critic. Apart from the novel Helene von Tournon from 1824, a story of courtly love at the court of Marguerite de Navarre, Amalia von Helvig mainly wrote sporadic poems. With her collection of poems Gedichte zum Besten der unglücklichen Greise, Wittwen und Waisen in Griechenland from 1826, that was sold in aid of the victims of the Greek war of liberation, she was engaged once more especially for the women and children who were the victims of warring men. She had already supported widows and orphaned children in 1815, after the battle of Leipzig in 1813, through the sales of her anti-French propaganda leaflet to German women: An Deutschlands Frauen, von einer ihrer Schwestern from 1815. As an author, she also regularly described women’s living conditions. In several of her literary works, she explored the tension between women’s striving for intellectual freedom and individual independence, human moral duties, and women’s “natural” calling as wives and mothers.

Despite her own creative work, Amalia von Helvig has mostly been reduced by researchers to the role she played in relation to famous intellectual men — with the exception of a few feminist works focused on women’s history. In Germany she has mostly been remembered as the translator of Tegnér and as Goethe’s and Schiller’s ambitious pupil, who in her own writing was recognised as having formal skills and a certain fantasy, although she was considered to lack “heart” and true passionate genius. In Goethe’s and Schiller’s theoretical work Über den Dilettantismus she is used as a prime example of “feminine” dilettantism. In Sweden, Amalia von Helvig is even today mainly known for the central role she played in the Uppsala salon, her relation with Geijer and her influence on his intellectual development.

After long suffering from tuberculosis, Amalia von Helvig died on 17 December 1831 in Berlin. Her grave no longer exists. 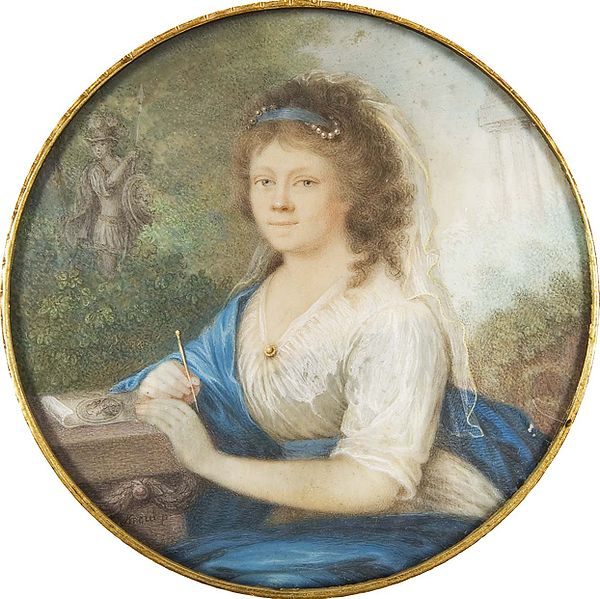