Amanda Kerfstedt was a popular author and playwright in the decades around the turn of the twentieth century. To posterity she is mostly known for her literary portrayals of social hypocrisy and sexual double standards.

Amanda Kerfstedt was born and raised in Eskilstuna, where her father was the local mayor. Her interest in literature was awoken at an early age, but by the time she was 13 years old her mother’s health was failing and Amanda had to give up school in order to run the household. At the age of 20 she married a clergyman who was 40 years her senior, Sven Gustav Lindgren, and she had a son with him called Hellen. When her husband died just three years into their marriage Amanda moved to Uppsala. There she became part of the cultural circles of the town and married Petrus Kerfstedt, with whom she had a second son, Signe. In 1879 the family moved to Stockholm as Petrus Kerfstedt had been appointed rector of the Tomteboda institute for the blind. In 1903 her husband lost his job due to “a lack of care toward the institute and its finances”. Six years later Amand Kerfstedt became a widow for the second time. Finding it hard to provide for herself as a writer she fell into dire economic straits.

Amanda Kerfstedt made her debut in 1865 using the pseudonym ‘-y’ with the two children’s books Signild och hennes vänner and Tiggargossen och qvastgubbens dukater. Having won a short story competition in the magazine Eko in the mid-1870s she began to write adult fiction. She sent stories to Eko and Tidskrift för hemmet which were subsequently published in a short story collection called Vid vägkanten, 1880.

During the 1880s Amanda Kerfstedt became involved in the women’s movement. She was one of the founders of Svältringen, a literary clique which served as a meeting point for many who came to be viewed as the new generation of young authors, and from 1889 to 1890 she served as the editor of the Fredrika Bremer Association’s magazine Dagny. With her writing she contributed to the current debate on women’s rights. The short story “Synd”, published in Finsk tidskrift in 1881, told the story of a married man and his affair and became frequently referred to in the ongoing moral debate due to it’s criticism of societal hypocrisy and double standards. The short story was also published in the anthology entitled Synd – noveller av det moderna genombrottets kvinnor in 1993. Sexual double standards were also a theme in the short story collection called Kärlek och andra berättelser, 1885, and the novel Eva, 1888. Holger Vide, 1893, portrays a mother who abandons her children and subsequently dies. Reflexer, 1901, is the first Swedish novel to focus on a male transvestite. The central character is portrayed sympathetically and the author attempts to provide a psychological explanation for his desire to wear women’s clothes.

Amanda Kerfstedt was also an active playwright and two of her plays were produced at the Royal Dramatic Theatre in Stockholm. The one-act play Lilla Nina was performed in 1882 and its theme, typical of the era, was a doll’s house. Hett blod, which premiered in 1888, is about a police chief’s fiery sense of humour and its consequences. Between 1882 and 1908 Amanda Kerfstedt published close to everyday life and realistic children’s books and one youth book. She also reworked Onkel Toms stuga for Barnbiblioteket Saga.

Amanda Kerfstedt died in Stockholm in 1920 and is buried at Solna cemetery. 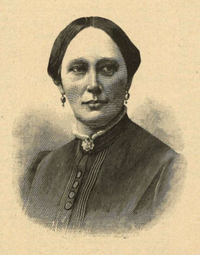