Amanda Sidwall was a prominent colourist and portrait painter who was active during the second half of the 1800s.

Amanda Sidwall, a tanner’s daughter, was born in Stockholm in 1844. She began her artistic training at the Slöjdföreningen (traditional handicrafts society) school in 1860. When Konstakademien (the academy of art) began to accept female students Amanda Sidwall was among the first women to enrol. She joined Fruntimmers-Afdelningen (the women’s section) of the academy in the autumn of 1864. Meanwhile she was still benefiting from the instruction offered at the Slöjdföreningen school for a few years. Her favourite teachers at Konstakademien were J.C. Boklund, a historical- and portrait painter, and the sculptor C.G. Quarnström. She also spent a few years studying drawing with J. Höckert, a historical- and genre painter. She received plaudits for her coursework.

Some years after completing her training in Sweden Amanda Sidwall and her friend and fellow artist Anna Nordgren travelled to Paris together. They enrolled at one of the two women’s sections within the Académie Julian in 1874. Amanda Sidwall sent letters home to her family describing her student years in Paris and expressing her admiration for the historical painter Tony Robert Fleury, who was one of the instructors at the academy. He recognised her talent and encouraged her to submit her paintings to the Salon de Paris. This she did and subsequently her work was exhibited at the Salon many times. Her primary motifs were portraits and genre paintings, often including children. It was not just an honour to be selected for display at the Salon, it was also of financial significance. In 1877 she received praise for her first major painting entitled Högläsning which was deemed to display unusual bravura and freshness. The French government purchased two of her paintings, Lappflicka and Blomsterflicka. Her greatest success was achieved with her large painting entitled Den första läxan which had been accepted by the Salon de Paris in 1882. It was put on display and acquired by a wholesale merchant from Gothenburg. The last large painting she submitted to the Salon was Mormors födelsedag in 1883, and it too was purchased by a private Swedish individual. Her works were also sold to private French citizens. From 1879 onwards she had her own studio in Paris, but now and again she would visit the Académie Julian and undertake some teaching.

By the time Amanda Sidwall travelled to Stockholm in the summer of 1883 – having seen to it that her young student named Mina Carlson-Bredberg was introduced into the Académie Julian – she was thus already an established artist. She had previously painted Mina Carlson-Bredberg’s portrait in 1876 during one of her frequent visits to Sweden. This portrait was exhibited at the 1877 Konstakademi exhibition where, according to the critics, it was considered to be one of the most interesting works on display, with its expeditious brushwork and confident use of colour. Amanda Sidwall’s skill as a portrait artist can clearly be seen in her Självporträtt. Here she depicts herself wearing a yellow hat adorned with a blue rosette, bearing a serious facial expression, and holding a book in her hands. The critics noted this self-portrait, deeming it a good example of French-inspired Swedish painting. In 1890 Amanda Sidwall also painted her parents, using a sober colour scheme. She used shiny light colours when painting her nieces and nephews, as seen in her 1884 painting Hjärtetjuven. Her portraits were lauded for their inspired painting style and their vibrant expressions. During her time in Paris Amanda Sidwall had stopped painting in brown hues and opted for pure colours and broad brushstrokes.

Amanda Sidwall ended up having to stay on in Sweden in order to help her mother run her household, although she had intended to divide her time between Paris and Stockholm. She began to teach at her parents’ home and then in Emma Ekwall’s studio, before finally renting her own studio. She emphasised the use of pure colours in her teaching. She recommended that paint be applied in dabs and not thinned out too much by the brush. However, the commissions for portraits diminished in number. According to Mina Carlson-Bredberg this was a result of her slow and thorough work rate. Amanda Sidwall also produced several remarkable drawing and watercolour studies.

Amanda Sidwall displayed her work at several exhibitions in Sweden: at Konstakademien in 1877 and 1889, at the Norrland art society exhibition in Söderhamn and Sundsvall in 1884 and 1885, at the Valand exhibition in Gothenburg in 1886, and at Sveriges Allmänna Konstförenings mobile exhibition in 1888, as well as the Nordiska exhibition in Copenhagen in 1888.

Amanda Sidwall died of influenza in Stockholm in 1892. In 1911 her work was included as part of the historical section of the first exhibition held by Föreningen Svenska Konstnärinnor (FSK; Society of Swedish female artists). On the 50th anniversary of Amanda Sidwall’s death the National museum put on a display of her work. Since the late 1980s Amanda Sidwall’s work has been included in exhibitions of female artists, such as De drogo till Paris. Nordiska konstnärinnor på 1880-talet, held at the Liljevalchs art gallery in Stockholm in 1988. Den första läxan was included in the Salongsmåleri? exhibit held at Prins Eugens Waldermarsudde in 2016. 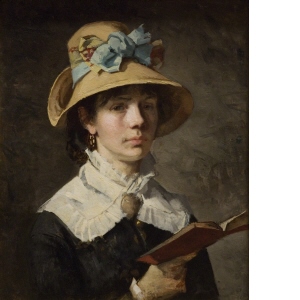