Ann-Ida Broström was a major donor within Gothenburg’s cultural, scientific and research spheres during the first half of the twentieth century.

Ann-Ida Broström was born in Gothenburg. She was the daughter of August Johansson Mark and Sophie Mark and she was one of eight children. Her father was a wholesaler who hailed from Mark county district in Västergötland and he, along with his two brothers, played a significant role in Gothenburg’s emerging textile industry.

In accordance with the customs common to Gothenburg merchant families of the time, Ann-Ida Broström was raised to be a good and faithful wife to a man from the right social class. Dan Broström, who was twelve years her senior, was just such a man. He was heir to the largest shipping business in Sweden, Broströmskoncernen, and he was politically active within Gothenburg municipality. However, his father, Axel Broström, who had founded the shipping company in 1865, was unhappy with his son’s choice of spouse. Despite never having met Ann-Ida Broström he viewed her as lazy, not hard-working enough, and too concerned with leisure. Ann-Ida Broström never had the chance to meet the man who would have been her father-in-law as he passed away before she married his son in 1906 in Gothenburg’s Haga church.

Ann-Ida Broström first appears in an official capacity in the Idun magazine report on “Våra nya statsrådinnor” within the civil service of the Hammarskiöld government which came to power following the so-called ‘Borggårdskrisen’ (Courtyard crisis) of 1914. Ann-Ida Broström’s husband had been appointed Minister of Naval Affairs. He had already been a parliamentarian during the 1906–1911 period serving on behalf of the Liberal coalition party. Amongst other things, he had pursued the question of equal voting rights for men and women. According to Idun women and homelife were important issues to the new cabinet members as it was at home that they enjoyed “faithful love and unfailing sympathy”. Idun described the then 32-year-old Ann-Ida Broström as a “distinguished young woman from Gothenburg” who had accompanied her husband to Stockholm.

Broströmskoncernen expanded rapidly and after the First World War it became a global company. Several major projects were expected to be completed under Daniel Broström’s leadership. In 1925, however, life changed unexpectedly for the family as Daniel Broström was killed in a car accident, leaving Ann-Ida Broström alone with three daughters and a son. Everyone’s sight was set on the expected heir to the business, 10-year-old Dan Axel Broström, whose whole childhood and education was based on preparing him to take over the running of the company. Throughout his life Dan Axel Broström was continually compared to his father, whom Ann-Ida Broström described in a letter to her son as “the great father”. Her son’s school education was very important to her as a means of enabling the third generation of the Broström family to run the business.

Whilst waiting for Dan Axel Broström to come of age it fell to relatives and men who had married his sisters to temporarily manage the company. Ann-Ida Broström held the majority of the shares and thus remained the central figure in the business. Her large house in the Lorensberg area of Gothenburg thus became not just a focal point for her children but also for friends and business acquaintances. In 1928 Idun described the house as somewhat reminiscent of an English castle, where the family lived when they were not in their Särö house or at their manor near Alingsås.

Ann-Ida Broström devoted most of her time towards donating money, as was the long-standing tradition in Gothenburg when it came to well-known families such as Carlander, Dickson, Chalmers, and Sahlgren. Her husband had donated funds towards the erection of Sjöfartsmuséet Akvariet (Gothenburg Maritime Museum & Aquarium) and for the Broström trust building in Kungsladugård, amongst other things. Ann-Ida Broström wanted to expand these funding efforts in honour of her husband’s memory as this would create a legacy for the Broström family to last long after she had passed away herself. The extensive nature of her donations made Ann-Ida Broström well-known in Gothenburg. Indeed, Karl Gerhard even dedicated a humorous song to her financial generosity, which included the refrain: “Åh, Ann-Ida/ Du flotta och likvida!”

These donations were primarily directed towards church matters, sea rescue work, and cultural, scientific, and research efforts. For example, she donated funds towards building the Dan Broströmshemmet, student housing in the Lorensberg area, as well as to Gothenburg college towards the establishment of a professorship in ethnography. She also financed an ornament for the chair of the Medical Society in Gothenburg, which later inspired its logo. Her Lorensberg house was donated to Sveriges Redarförening (Swedish Shipowners’ association) so that it could become “Sjöfartens hus” (the House of Shipping) after her death. She donated the funds for two life-saver yachts in 1930 and in 1965, both named Dan Broström and she set up a memorial fund for “Havens arbetare” (maritime workers). A less well-known donation was made towards the raising of the royal ship Vasa, and it is likely this work would never have been completed without the funds received from Broströmskoncernen.

Ann-Ida Broström died on the eve of the 100th anniversary of Broströmskoncernen, on 27 November 1965. She was then 83 years old. Her death meant that the links which held the company together were lost and several years of bitter power struggles ensued until Dan Axel was forced to resign from all his posts within the business due to ill health. The then current editor in chief of Göteborgs-Posten, Harry Hjörne, described Ann-Ida Broström in an obituary as “the figurehead of the entire Broströmskoncernen and the majesty of every launch”. Ann-Ida Broström was buried in the Broström family grave at Östra kyrkogården (the Eastern Cemetery) in Gothenburg. 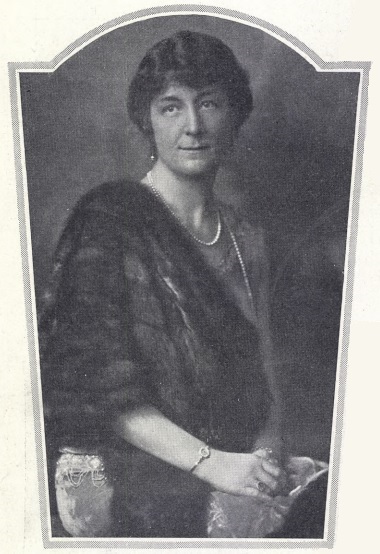