Ann Margret Holmgren was an author and a cultural celebrity. She actively worked on behalf of the women's suffrage movement, including the founding of several local associations connected to the movement.

Ann Margret Holmgren was born in February 1850, and was the fourth in a family of six children. Her mother was Baroness Augusta Jacquette Cederström, and her father was Jacob Nils Tersmeden, a chamberlain. They all lived at the family home Hessle, near Uppsala. Hessle was a large country residence and the children helped to run the household. Ann Margret’s mother suffered from a debilitating long-term health condition. She died during a visit to Stockholm in early May 1860 from tuberculosis of the lungs. Following her mother’s death, Ann Margret and her family would spend term times living in Uppsala with her father’s sister, Adolfina Ulrika von Troil, as Ann Margret’s brothers Carl Herman, Nils, and Fredrik Vilhelm were enrolled at school there.

Ann Margret’s parents had liberal opinions and ensured that their daughters gained both a literary and intellectual education. Ann Margret Holmgren and her sister were taught by a governess. Their father embarked on an educational tour of Europe in 1861 with Ann Margret and her elder sister, Sophie, in order to further widen his daughters’ horizons. Just a year after their return to Sweden their father fell ill with a lung infection, to which he eventually succumbed five years later.

The Holmgren sisters continued to spend their summers at Hessle and their winters at their aunt Adolfina Ulrika von Troil’s home in Uppsala. A year after her father’s death Ann Margret Holmgren met Fritjof Holmgren, and they married in 1869. Fritjof Holmgren was a medical doctor and at the time he married Ann Margret he was a professor at Uppsala University. The couple settled in Uppsala and had eight children together, born during the years 1870-1884. Ann Margret Holmgren played a significant role in the academic world, and was active in various Scandinavian movements, while also running her substantial household. In the early 1880s the Holmgrens built a villa, Åsen, which they then moved into. It served as a meeting place for the radicals of Uppsala, both teaching staff and students. The debates covered various issues such as suffrage, parliamentarianism, workers’ rights, contraception and religious freedom and came to influence Ann Margret Holmgren’s outlook.

Ann Margret and her husband’s activities in Uppsala brought her into contact with the great thinkers and cultural celebrities of her time. Some of them had spent time in her home when they were students, whilst others she met through her work. Sophie and Artur Hazelius were two of her closest friends and the Holmgrens closely followed their efforts to raise money and collect items for what later became the Nordic Museum and Skansen.

The Holmgrens’ financial situation took a turn for the worse when their inheritance, which was tied up in stocks and shares, stopped producing a return. They then began to take in lodgers and their home became a meeting place for several generations of students. Throughout 1897 Fritjof Holmgren had suffered from vascular disease and it eventually took his life in August that year. This caused further economic difficulties for Ann Margret Holmgren, particularly with regard to her extensive financial obligations. She then began to work as a director at Uppsala Nya Tidning, but it was not to her liking and she gave it up after a year. She subsequently became a member of the editorial committee of Verdandi’s writing series, whilst she herself began to write seriously. She released her first publication under the pseudonym of Märta Bolle. Despite her efforts, her financial situation remained strained and in 1901 she sold the family home and moved to Stockholm, where she remained until her death in 1940.

During her period in Uppsala Ann Margret Holmgren had held what she called “family evenings”, gatherings where Uppsala residents and students could mingle. These evenings ended suddenly after she had participated in the so-called Sedlighetsdebatten (morality debate), which had been organised by the Verdandi student association. The topics of discussion had included family planning, prostitution and free love. This had so upset the predominantly conservative société of Uppsala that she became excluded from local social life, a strong blow for Ann Margret Holmgren. That summer she travelled to Norway to visit her friends Karoline Reimers and her husband, the author Bjørnstjerne Bjørnson. These visits became a tradition, which lasted several decades. Ann Margret Holmgren learnt to speak Norwegian and served as the role model for the heroine in Bjørnson’s novel På guds veje, from 1889.

Ann Margret Holmgren’s first task was to help found local suffrage associations across the country. Her travels were not funded, but her sister Sophie donated 150 kroner toward the expenses. In 1903 Ann Margret Holmgren travelled to southern Sweden and in the autumn of that year she initiated what became her famous tour of Norrland, covering all the places which had a railway station. She began in Luleå, Boden, Malmberget and Kiruna. Her talent for public speaking was put to great use and she quickly developed a routine for her talks. These journeys made her well-known in the suffrage movement and she had a lot of success. She also participated in suffrage conferences held in Copenhagen in 1906 and in Amsterdam in 1909. She spent 20 years of her life working actively on behalf of the suffrage movement.

After Ann Margret Holmgren’s sister Sophie became a widow in 1908 the two sisters moved into an apartment on Norr Mälarstrand in Stockholm. A major party was held at the Grand Hotel to celebrate Ann Margret Holmgren’s 60th birthday, at which she was presented with a long necklace made up of 50 women's suffrage activist badges, each bearing the name of a local association which Holmgren had established. This necklace can be seen at the Nordic Museum. On her 75th birthday Ann Margret Holmgren was awarded the Illis Quorum gold medal of the eighth degree.

Ann Margret Holmgren was a frequent contributor to several newspapers and journals during the last years of her life. She most enjoyed writing biographies of men and women whom she admired, including Bjørnstjerne Bjørnson, Fritjof Nansen, Saint Bridget, Fredrika Bremer, Ellen Key, and Jenny Lind. When women gained the right to vote in 1921 she continued her work as a founder of Svenska Kvinnors Medborgarförbund, whose aim was to teach women to view themselves as equal citizens with rights and obligations. In her final years she also became engaged in the peace movement. During the 1920s she published her memoirs in a two-volume set called Minnen och tidsbilder, recounting her rich life and work. She died in 1940, aged 90, in Stockholm and is buried at the Gamla cemetery in Uppsala. 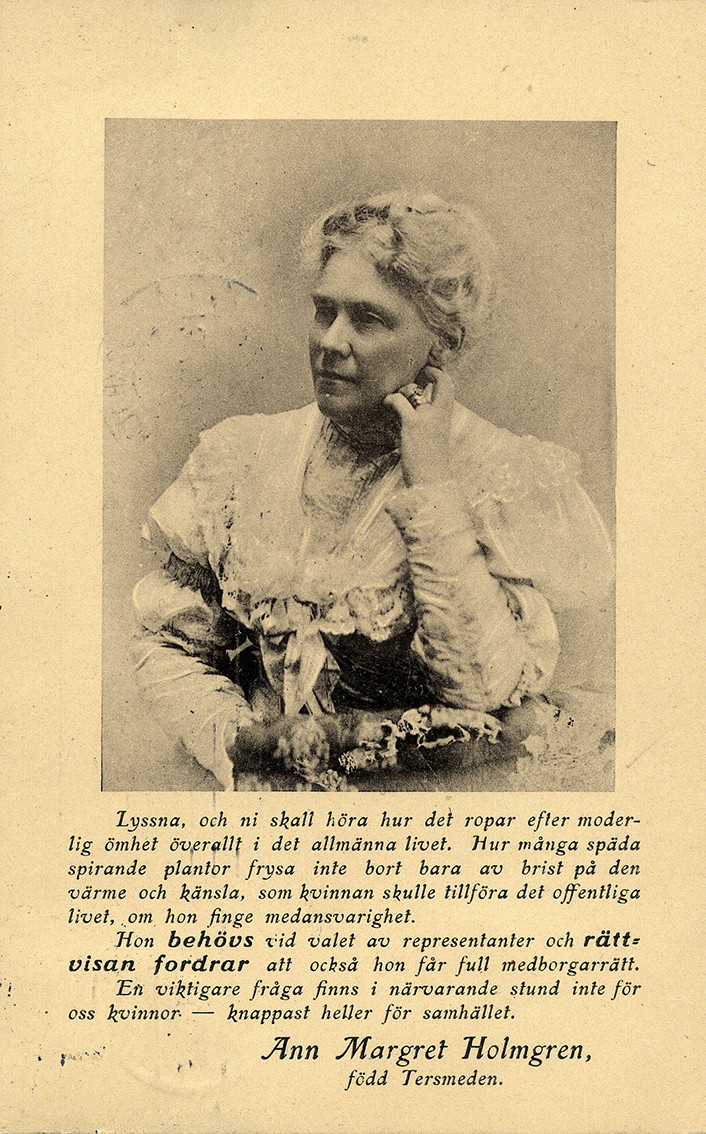