Anna Ahrenberg was a donor who contributed money to Gothenburg College (now the University of Gothenburg) and scientific research. She was active in various societies and was especially protective towards Italian culture.

Anna Ahrenberg was born in 1861 in Gothenburg, the fifth child of seven. Her parents were Sara Fredrika Lindhult, née Wessberg, and Carl Lindhult, a merchant. She grew up in Gothenburg and lived there all her life. The family was very interested in music. Her paternal uncle Oscar Lindhult was a voice teacher in Gothenburg and a friend of Jenny Lind. Both Anna Ahrenberg and her younger sister Walborg Lindhult trained to be music teachers. Before her marriage, Anna Ahrenberg gave private piano lessons. She also taught at Robertine Bersén’s piano school, founded in 1887.

In 1898, Anna Ahrenberg travelled for the first time to Italy, a trip that resulted in a lifelong interest in the country and its culture, with many journeys there and studies of the Italian language. In 1900, she married the wealthy wholesale dealer, member of parliament and donor Henrik Ahrenberg. The marriage was childless. Her husband shared her interest in Italy and in Rome they both met up with Vilhelm Lundström, a professor of classical languages at Gothenburg College, and his students, when the latter were on a study trip in 1909. The trip was a pioneer work that had been preceded by great preparations at the college, with lectures for a charge to finance the trip and free lessons in Italian given by Ebba Atterbom, a translator and teacher of Italian. Anna Ahrenberg’s friendship with Vilhelm Lundström lived on for many years and laid the foundations for their continued cooperation. In 1915, Anna Ahrenberg was widowed. In her husband’s will, that in no way left his wife penniless but rather the opposite, took good care of her financial security, there were also instructions on a number of donations, work that he had started and that Anna Ahrenberg continued.

Anna Ahrenberg was active in various societies and combined that with her donations. She was one of the founders of the association Göteborgs Idun in 1923, which had the Danish association Kvindelig Læseforening as its model. To manage the economy, the limited company Göteborgs Idun was started in 1924, in which Anna Ahrenberg bought shares apart from the donations she made to the association. She also gave contributions to the women’s house Kvinnornas hus that the association eventually purchased. The address was Storgatan 47 and it was opened in 1941. That the opening was attended by crown princess Louise Mountbatten shows how important the association’s work was deemed to be. The association, that is still active, had as its goal popular education, as well as gathering women together who had cultural and social interests. They organised lectures on science, art, literature and music, made study visits and supported idealistic activities of a social nature. The association also arranged children’s theatre and events for the benefit of charity. It is said that much bridge was played during the 1930s.

During the 1920s and 1930s, Anna Ahrenberg played a prominent role in the cultural contacts between Sweden and Italy. She continued her studies of Italian, the language she loved, during her whole life. She also performed as a pianist in social contexts like association meetings and charity events. After her husband’s death, Anna Ahrenberg continued living in their home in Föreningsgatan 10, where she and her husband had furnished a special room called “the Italian room”. Among her women friends were often Italians and she travelled regularly to Italy. There she was a well-known guest in the best salons and once she had an audience with Mussolini. On 12 March 1925, Anna Ahrenberg and others, among them Vilhelm Lundström and Ebba Atterbom started the Swedish-Italian Association at a meeting at the Gamleport restaurant in Gothenburg. Vilhelm Lundström was elected chairman, Ebba Atterbom was made vice-secretary and Anna Ahrenberg was made the cashier.

The association, that is still active, had right from the beginning a lively and full programme. Its activities have since its start consisted of arranging scientific and popular lectures in archaeology, history, literature and music, with subsequent social get-togethers.

Anna Ahrenberg continued her whole life to make large donations, for both philanthropic and scientific ends, often as “donor unknown”. As early as 1898, Gothenburg College (now the University of Gothenburg) had been awarded money annually by Henrik Ahrenberg, and the college took up a central position as the recipient of Mrs Ahrenberg’s donations too. At the meeting of the Swedish-Italian Association at Valand in Gothenburg on 16 February 1928, it was announced that Anna Ahrenberg had donated money to be used to pay the salaries for three years of a lecturer in Swedish language at an Italian university and of a lecturer in Italian at Gothenburg College. Three years later, as a memorial to her own seventieth birthday on 3 February 1931, she made a large donation that laid the foundation for the fund Anna Ahrenbergs Italienska Lektorsfond. This donation was to guarantee the existence of the Italian language at this seat of learning for many years. Later the same year, Anna Ahrenberg was the first Swedish woman to be awarded the Italian king’s gold medal for her contributions to strengthening Swedish-Italian cultural exchange. In 1931, she also received the Swedish king’s gold medal of the eighth grade with the inscription “For civic merit”. In 1941, she received an honorary gift from the Italian state, consisting of a briefcase filled with Italian etchings, and handed over by the envoy Giuseppe Renzetti, as thanks for her contributions to the teaching of Italian at the college and to Swedish-Italian relations.

On 27 March 1933, Anna Ahrenberg made yet another large donation by starting the foundation “Anna Ahrenbergs fond för huvudsakligen vetenskapliga ändamål”. Anna Ahrenberg herself was the chairwoman of the foundation’s board for the rest of her life. She also made a great number of other donations to Gothenburg College, for example for a professorship in classical antiquity and its history, a library for the teacher training college, the department of marine botany, as well as a large donation to the building of the school of art history. In the 1930s, Anna Ahrenberg also started a foundation for residential accommodation, Anna Ahrenbergs stiftelse, with rent-free flats in a building in Gibraltargatan for less affluent older ladies. She was the chairwoman of the charity association Sällskapet för uppmuntran av öm och sedlig modersvård and in De blindas vänner, and she was a member of the board of the Christian YMCA (KFUM). In 1946, she was elected to be an honorary member of the Dramatiska och musikaliska artisternas pensionsförening. During her lifetime, Anna Ahrenberg made many donations that are not named here. She also lay the foundation for how the donations enterprise should be continued after her death.

Anna Ahrenberg died in 1948, at 87 years of age. She lies buried in the Eastern Cemetery in Gothenburg with her husband Henrik. 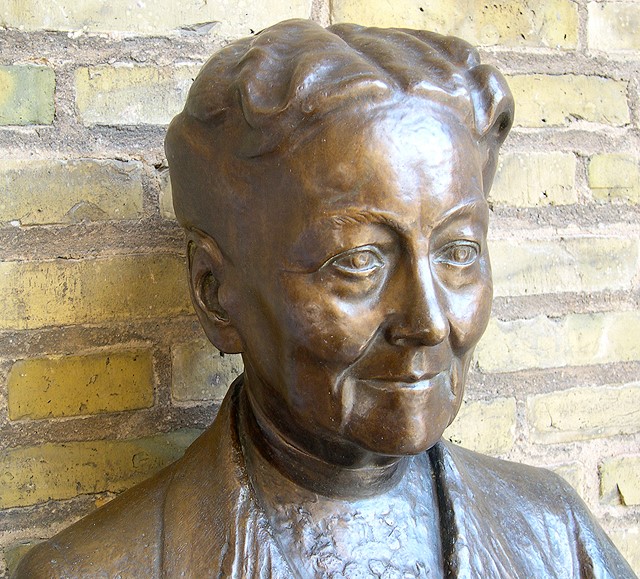