Anna Alin-Bosson was an elementary schoolteacher, a folk high school teacher and a music teacher. She was the assistant principal at Tärna folk high school for more than three decades, responsible for women’s courses. She was also the principal for the rural domestic science college at Tärna.

Anna Alin-Bosson was born in 1883 as Anna Teresia Alin. She grew up in a village outside Lund where her father Olof Alin was the schoolteacher and church organist. Her mother Maria, née Andersdotter, gave birth to seven children of whom all except Anna Alin-Bosson and her older brother Folke died before the age of three. In 1899, Anna Alin-Bosson completed seven years of studies at the Eslöv private elementary school for girls and in 1902 she matriculated at Katedralskolan in Lund. In 1904, she qualified as a teacher at the new elementary training college for schoolmistresses in Landskrona; and thereafter she was engaged as an elementary schoolmistress at the coeducational school at Klippan. She stayed there for three years while at the same time qualifying for her examination as an organist and church singer in Strängnäs in 1906.

In 1908, Anna Alin-Bosson married Nils Hjalmar Bosson and they later had two daughters. Her husband, whose family was firmly established in the folk high school environment, had studied geography at Lund University and later become a folk high school teacher. Just before their marriage, he had taken up his position as principal of Hammenhög folk high school in the southern Swedish province of Skåne. It now became his 25-year-old wife’s task to support him in his work, as assistant principal responsible for women’s courses. Anna Alin-Bosson was especially engaged in the new housekeeping course, and contributed through her way of organising it so that it developed into an independent rural domestic science college, a reform that was implemented on a national scale in 1913 when the folk high schools were given the possibility of organising women’s rural domestic science colleges as the equivalent of the men’s agricultural colleges. The housekeeping education at Hammenhög thus consciously emphasised the relationship between the rural household and agriculture and also included healthcare and childcare, children’s upbringing, education and psychology as well as home care including aesthetics and art studies.

After only a few years, it was however time for Anna Alin-Bosson to leave Hammenhög. In 1913, her husband was appointed principal of Tärna folk high school in Kumla parish outside Sala in the province of Västmanland. He and his wife were to remain there for 35 years until their retirement. Tärna was one of the oldest folk high schools and also one of the best known, thanks to the previous principal Teodor Holmberg and his wife Cecilia Bååth-Holmberg. They had led the school for more than three decades and been very influential in the general development and discourse within the folk high school movement in Sweden, especially in their early years. Towards the end, they had become more and more isolated on account of their political leaning to the right, their ever-stronger nationalist sympathies and their rejection of the Scandinavianism that had been a mainstay in the development of the folk high school movement.

It now became Anna Alin-Bosson’s task to take over after Cecilia Bååth-Holmberg as responsible both for the Tärna women’s summer courses and for the rural domestic science college that had now reorganised the housekeeping courses. She clearly succeeded very well right from the start; in 1915, the women’s folk high school and rural domestic science courses set a Swedish record with 105 pupils. Both sets of women’s courses took place during the summer season, but in 1917, a shorter winter course was also started. When the activities took place during the entire year, it was easier to run the small farm linked to the rural domestic science college. In addition, it was easier to recruit qualified rural domestic science teachers since they could be guaranteed work all year round. The garden was also put into order which meant that the gardening course could be further developed. In the booklet for Tärna folk high school’s 50th jubilee in 1926, Anna Alin-Bosson established that the aim of the women’s courses at Tärna and at the rural domestic science college was to ”serve our homes and our country through our striving to form alert, lively, hard-working, capable, warm-hearted, good women.” In many ways, the enterprise was still based on the ”maternal” educational ideal recommended by Cecilia Bååth-Holmberg, focusing on practical household work in others’ homes or one’s own. However, society’s transformation made successively new demands on education for women, with greater focus also on theoretical knowledge. The folk high school gradually became a more and more important educational path for women wanting to continue on to other studies. In 1937, Tärna folk high school also started accepting women pupils on the winter season’s second-year course, which meant that coeducation was put into practice for the first time. In 1942, Tärna rural domestic science college was made completely independent of the folk high school and Anna Alin-Bosson then became its principal up until 1944. She continued her work at the folk high school until her husband’s retirement in 1947.

Even though Anna Alin-Bosson was strongly involved in the women’s courses at the folk high school and also at the rural domestic science college, it was music and singing that were her main interests. Unison singing was generally important in the folk high school movement, and it had also been emphasised by the former principals at Tärna. Anna Alin-Bosson strengthened its status further. Her capacity to get people to join in singing was described by people around her as unique, which was apparent in daily teaching and at social gatherings and parties. She was a skilled pianist and singer, an eminent voice teacher and was characterised as ”an educator through singing”. She emphasised the significance of unison singing that she also mainly worked with in her singing lessons. She taught singing to both men and women at Tärna. Her aim was above all the awaken their desire to sing and to learn songs that gave them a varied repertoire that could express many different moods, songs that they could then bear with them and use in their home lives as well as in associations and congregations. One important task for Anna Alin-Bosson was also to lead the school choir. Tärna always had one and there part-singing was the rule. The choir also gave concerts in Kumla Church.

Tärna remained a great and important folk high school under the leadership of Anna Alin-Bosson and her husband, one which was to educate many young teachers and folk high school principals-to-be. In 1934, a course for young folk high school teachers was organised on the assignment of the Swedish folk high school teachers’ union: Svenska Folkhögskolans Lärarförbund, SFHL (the predecessor of Förbundet Folkhögskollärarna). They had close contact with other folk high schools, among others the one at Bollnäs where her sister-in-law Ingeborg Bosson was the principal during the 1930s and 1940s. They reinforced their international contacts and created many personal links with people in the other Nordic countries and further afield. Diverse artists, teachers, scientists and representatives of the cultural life of the times visited the school. They also tried to create closer links with the Danish folk high school movement’s traditions.

Many pupils came from isolated farms and villages in the countryside or from demanding conditions in workplaces, and during the 1930s, there was grave unemployment. Gradually, more and more international pupils arrived from various other countries. In these contexts, the Grundtvig philosophy of the folk high school as a home- and family-like community became even more important. Anna Alin-Bosson had a vital role in this not least because of her capacity to create a feeling of community through singing and music. She became very admired and loved in the central position she had at the school: ”Tärna certainly suffered its greatest loss ever when Anna Bosson retired at the same time as her husband”, as a former pupil stated when he looked back many years later on his days at the folk high school. ”Nobody will ever be able to achieve the position she had”, was another assessment. Anna Alin-Bosson was also very involved in the life of associations linked to the Christianity that was important to her all her life, as well as those linked to singing and women’s issues. During her time as a student, she sang in several choirs in Skåne. She founded the Kumla congregation’s church choir in 1933 and was its leader until 1947. She also participated in Västerås Diocese’s church choral festivals. Anna Alin-Bosson was a member of among others the women’s associations Fredrika-Bremer-Förbundet, Riksförbundet kvinnlig samhällstjänst and Vita Bandet and she was also a board member of the Västmanlands husmodersförbund and Västmanlands läns hemslöjdsförening. Additionally, she was for some years a board member of the teachers’ union Svenska Folkhögskolans Lärarförbund. Her publications are few, like for example her personal thoughts in the Diocese’s Christmas book. She wrote an article on the composer Alice Tegnér in Sveriges K.F.U.K., the main organ of the YWCA in Sweden. It was re-edited in the 1930s by the YWCA’s secretary Signe Bosson-Alin, the widow of Anna Alin-Bosson’s brother Folke and also her sister-in-law.

Anna Alin-Bosson moved to Stockholm in 1947 on her retirement. She and her husband continued their engagement in international folk high school cooperation for several more years however. Among other things, she taught on a French-Nordic folk high school course at Rambouillet in France at the beginning of the 1950s.

Anna Alin-Bosson died in Enskede parish in 1962. Her funeral was in Kumla Church and she lies buried in Kumla Cemetery. 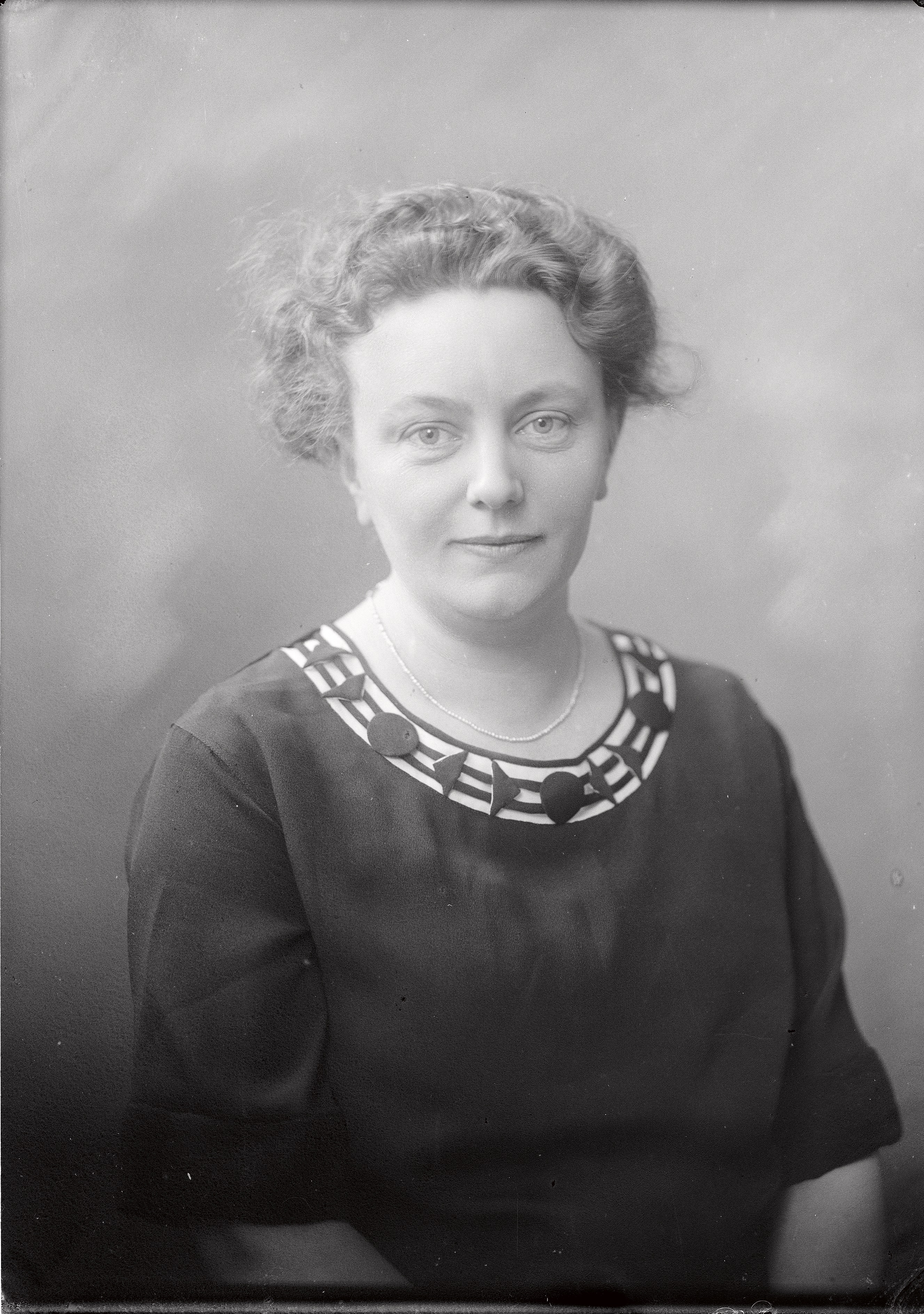