Astrid Sampe was a textile designer who was one of the leading revivalists of Swedish textile prints for both home furnishings and in public spaces.

Astrid Sampe was born in 1909 and spent her first six years in Nacka, where she lived with her parents Anna Sampe, née Larsson, and Otto Sampe. The family had ties to the Västgöta textile industry and in 1915 the family moved to Borås. Otto Sampe then followed in his father’s footsteps and by 1919 had become an established sock manufacturer in that town. Astrid Sampe gained her early education at the girls’ school Elementarläroverket för flickor in Borås. During her spare time she helped out with everyday work at her father’s sock factory, learning all the various aspects of the process. This doubtlessly contributed to her future choice of career. She was a creative person who displayed traits of an entrepreneurial spirit from the outset. From an early age she had produced drawings and designs and she went on study tours across Europe. She was also very interested in dance, which at the time was viewed as an aesthetic expression of modernism. Although she wanted to become a professional dancer she was steered towards becoming a drawing instructor, as this was considered to be a more reliable source of income.

In 1928 Astrid Sampe enrolled as a student at Teckningslärarinstitutet at Tekniska skolan (now Konstfack, college of arts, crafts, and design). However, she gave it up after two years and then began attending the textile department at Högre konstindustriella skola (advanced applied arts school, now also part of Konstfack). At the time the school was criticised for being too traditional and not paying enough attention to new modernist trends. Astrid Sampe’s role models included Ellen Key – in particular her views on the purpose behind a given item – as well as the Bauhaus movement, and the concept of functionalism – particularly in regard to the “form follows function” concept. Astrid Sampe developed a discriminating, quality-conscious, and simply elegant style, which had been fostered by the spring terms she spent at the Royal College of Art in London until 1933.

As a student Astrid Sampe undertook a fair amount of travels – to Germany, France, Italy and what was then Czechoslovakia – during which she formed an extensive personal network within the spheres of textiles and interior furnishings. She maintained these travels throughout her life and this proved invaluable to her, not least in terms of the artistic collaborations she entered into within the framework of her job at PUB department store. It was there that she was first employed as ‘broderikonsult’ (embroidery consultant) and as head of the handicrafts section.

In 1936 Nordiska Kompaniet (NK, Stockholm’s premier department store) employed Astrid Sampe as a textiles expert. She rapidly gained promotion and in 1937 she was appointed head of the newly-established NK textiles warehouse, which became an institution within Swedish textiles. That same year her work was displayed at the World’s Fair held in Paris. One of her close collaborators was the furniture designer Elias Svedberg, son of Andrea Andreen and The Svedberg, and brother of Hillevi Svedberg. Sometimes Astrid Sampe and Elias Svedberg exhibited their work together, as happened in New York in 1939. Their collaboration with the architect Sven Markelius significantly contributed towards a successful launch in the USA where Scandinavian design was just entering the market. However, her most productive collaborative effort was probably that with Erik Ljungbergs Textiltryck AB in Floda. It was in Floda that NK’s textiles were printed by the meter using film printing techniques. Indeed, the Signerad Textil project, comprising a group of twelve Swedish artists, had their collaborative efforts printed by Ljungbergs in 1954. During her time at NK Astrid Sampe was also a driving element within the department store’s exhibition section in the ground floor gallery. As part of her job as head of NK’s textiles warehouse Astrid Sampe had a central role in matters of interior decoration, particularly within textile and furniture designs, and was an influencer on matters of aesthetics. She designed around 250 patterns using various techniques and materials and worked with a range of textile companies, manufacturers, and artists. Two of her impactful trademarks from 1955 are the series called Linnelinjen and the pattern called Perssons kryddskåp.

Astrid Sampe’s greatest pioneering effort was, perhaps, her achievement within the industrial design technology. Her innovative development of fiberglass fabrics primarily for use in public spaces made a timely arrival in the early 1950s. Dorothy Liebes, in the USA, had been working on this since the 1940s but in Sweden no notable advances had been made. Now the Mölnlycke textile company was able to produce woven fabrics commissioned by NK textile warehouse and a new business niche was born – a fabric that was both fireproof and water-resistant. Around 1970, in collaboration with IBM and the programmer Sten Kallin, computers were used to generate the first textile patterns. The names of designs such as Datorkolonn and Concorde – consisting of graphic lines imprinted in wave-like patterns – resulted from this meeting between technology and art.

Astrid Sampe worked alongside many producers and manufacturers throughout the years: Borås Wäfveri AB, Kasthalls Mattfabrik, and especially Klässbols Linneväveri who still produce textiles she designed. Astrid Sampe enjoyed international success with the American design company Knoll Associates Inc. Indeed, her stay at Cranbrook Academy of Art in Michigan also proved significant to her artistic development, particularly through her connection with Eero Saarinen.

Astrid Sampe designed rugs, curtain fabric and home furnishing textiles. Her textiles were used in major interior furnishing jobs for embassies, consulates, shipping companies, hotels and other public buildings, as well as in private homes for everyday and celebratory occasions. Astrid Sampe designed the much-liked fabric series called Linnelinjen for Almedahl factories in Dalsjöfors. This design was launched at the H55 exhibition held in Helsingborg in 1955. It was a success and is still being produced and one of the patterns has even been used as a stamp in 1991. During the 1960s Astrid Sampe was primarily focused on major interior decoration projects for embassies and a commission by the Dag Hammarskjöld library at the UN building led to her producing 5 ‘rya’ rugs using threads from all over the world. Astrid Sampe also created fabrics for vessels belonging to the Svenska Lloyd shipping company. Although she retired in 1972 she soon set up a consultancy called Astrid Sampe-Design and began to work with Byggnadsstyrelsens Utrikesbyrå (Swedish construction board foreign office) and other clients.

Astrid Sampe exerted a strong influence within the textile and fabric industry at a time when it benefited from accomplished designers and companies such as AB Elsa Gullberg Textilier och Inredning, Svenskt Tenn AB with Josef Frank, Gocken Jobs, Märta Måås-Fjetterström in Båstad, Handarbetets Vänner and the ecclesiastical Licium (now HV Licium) company. Astrid Sampe was blatantly a progressive designer, a modernist who fit in with the “Swedish Modern” descriptor and for whom entrepreneurialism and international collaboration were trademarks of her artistry. Her “Mondrian”-type patterns dating from the late 1940s, inspired by Piet Mondrian, comprise simple geometrics in black, white, with blue, red, and yellow accents. The curtain fabrics called Rutil and Fibra are examples of this style, as is the tablecloth design Campari. Press reports abounded which highlighted Astrid Sampe’s magnificent home and made her a style icon – fashionable, exclusive, elegant – but always practical.

Astrid Sampe got married in 1936. Her husband was the director and designer Sten Hultberg. She added his name to hers after a while but they eventually divorced in 1951. Their daughter Monica Backström went on to became a well-known designer of glassware.

Astrid Sampe died on New Year’s Day 2002. Her surviving professional archive, which was immaculately ordered and structured, is now held within the Stockholm National museum collections. 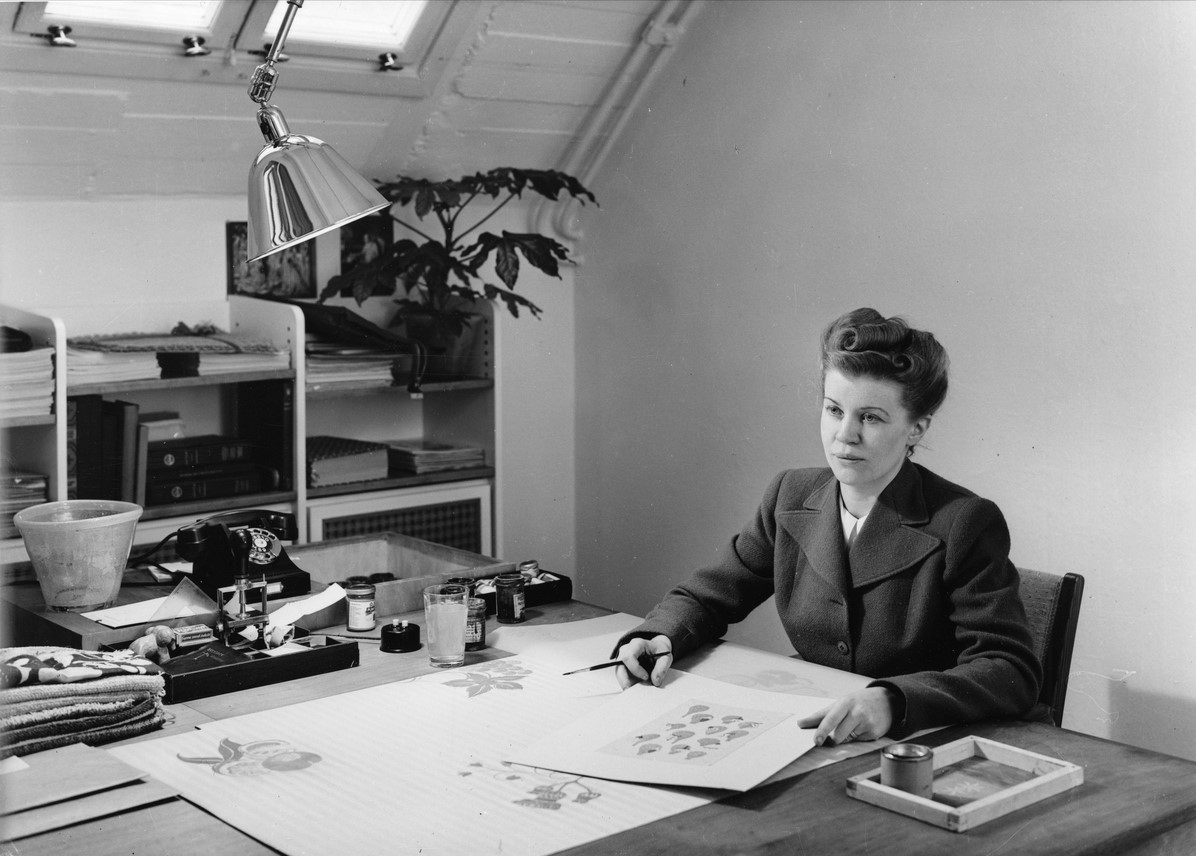