Anna Bugge Wicksell was a legal practitioner and a figurehead of the women’s suffrage and peace movements during the early decades of the twentieth century.

Anna Bugge Wicksell was born in Egersund, a small town on the southwestern coast of Norway, in 1862. She was born into an established family of merchants, functionaries and priests. The family has been described as mainly conservative albeit espousing some elements of liberalism. The family’s social circle included the author and public debater Bjørnstjerne Bjørnson and they supported demands for a “pure flag”, that is an entirely Norwegian flag without the symbol of union with Sweden. In 1885, Anna Bugge Wicksell was the fifth woman in Norway to obtain a school-leaving certificate as a private student. She then enrolled at university and two years later graduated with a Bachelor’s degree in Latin, French and English. She then commenced her legal studies with the intention of becoming a lawyer. She was active in the women’s movement from an early age and was one of the founders of Skuld, a college association for women. She was also one of the initiators of Norsk kvinnesaksforening (the Norwegian Association for Women's Rights), in which she served as chair for some time, and of Kvinnestemmeretsforeningen (the Norwegian women’s suffrage society), which were established in 1884 and 1885 respectively. She was often employed for public talks and was also active in women’s and peace gatherings across Europe.

At the first Nordic women’s conference, held in Copenhagen in 1888, Anna Bugge Wicksell met Knut Wicksell, who would later become her husband, for the first time. He was known in Norway for his societally revolutionary views, and mainly for his stance in the public morality debate in which he not only promoted contraception but also sharply criticised the existing marriage laws which made marriage obligatory and made women subject to their husband’s legal guardianship. Anna Bugge Wicksell had belonged to those in the Norwegian women’s movement who were not keen on entering the morality debate and instead wanted to focus on women’s rights to education, work, and voting. When Knut Wicksell, who sought to practice what he preached, suggested that he and Anna Bugge Wicksell should enter into a common-law marriage instead of a legal marriage Anna Bugge Wicksell had her doubts. She knew that this would turn her family against her and also that it would create particular obstacles for her as a woman. However, she gave in and the two were joined in a ceremony in Paris in 1889. In the presence of witnesses they signed a contract, which had been drawn up by the lawyer Karl Staaff, who later became Prime Minister of Sweden. The couple moved to Stockholm after having spent a year in Paris.

Between 1890 and 1900 the Wicksells lived partly in Stockholm and partly in Uppsala. They had their first child in October 1890, a son called Sven. Their second son, Finn, was born in November 1893. Anna Bugge Wicksell’s life at this point was focused on managing the household and family so that her husband could complete his studies and secure the family’s financial situation. She also motivated her husband and assisted him with proofreading, translation and practical administration tasks. At the same time she established connections with the growing women’s movement, gave public talks, took on various positions of responsibility and published on the women’s and peace movement.

In 1900 the family moved to Lund where Knut Wicksell, after many complications, had been appointed professor. A few years later the family expanded to include Anna Bugge Wicksell’s newborn nephew after her sister tragically died while giving birth; the boy became their foster child. In 1913 the Wicksells suffered a great loss as their son Finn died in an accident. The family remained in Lund until Knut Wicksell retired three years later. Anna Bugge Wicksell spent a lot of her time trying to get her husband to use his scientific knowledge in serious pursuits and not just in controversial projects and appearances. Her own personality was completely different – she was more low-key and focused on long-term work in order to achieve her goals. Nevertheless, they were both radicals, which - in combination with their common-law marriage - instigated a lot of criticism within the largely conservative society of Lund.

During her time in Lund Anna Bugge Wicksell’s future activism began to take shape. In her youth she had been particularly passionate about women’s suffrage and the peace movement, now she also became active in the liberal and libertarian movements. She also returned to her legal studies and graduated in 1911, having been delayed not only by her other priorities but also by a certain opposition from the university itself. She joined Lund’s Kvinnliga Studentförening (female students’ association), of which she became an honorary member after graduating. She never formally worked as a professional lawyer, which had been her goal, but she made great use of her legal knowledge in her public activities. Many wrote to Anna Bugge Wicksell and sought her legal advice and she gradually came to be considered an expert. For example, she supported Karl Staaff in producing the 1911 suffrage proposal.

Anna Bugge Wicksell was one of the initiators of the local women’s suffrage association which was set up in Lund in 1903. For many years she served as its chair or vice-chair. She also served as the vice-chair of Landsföreningen för kvinnans politiska rösträtt (the national association for women’s suffrage) for a number of years. She travelled a lot, ran courses, gave public talks, and was an active participant in the international women’s suffrage alliance’s congresses, where she held a leading position until her death. She became known early on for her ability to work inclusively: it was important to her that as many as possible were included, just as it was important that differing views should find expression. She initially encountered problems within the suffrage movement due to her radical views and because she was living in a common-law marriage. Her Norwegian citizenship also generated difficulties when the Nordic union was dissolved in 1905. However, in the long run she was able to enjoy a significant level of respect within the women’s suffrage movement in Lund, across Sweden, and internationally. She eventually became a Swedish citizen, but not until 1911 when she had gained her law degree.

Anna Bugge Wicksell’s most spectacular contribution to the women’s suffrage movement was probably the “the Wicksellian discovery”, a legal hole in the contemporary tax laws which meant that married women, under certain circumstances, could obtain their own tax receipt, which then entitled them to partake in municipal elections. This spurred what was already an active women’s suffrage movement on further and resulted in a tangible increase in women’s political involvement at the municipal level. Anna Bugge Wicksell herself was elected onto Lund city council in 1913 on a specific women’s list, and was a member of the council until 1918. When she subsequently moved to Stockholm and Mörby she joined the councils there.

The outbreak of the First World War meant that the suffrage movement stagnated somewhat and efforts on behalf of the peace movement became Anna Bugge Wicksell’s main focus. An issue dear to her heart was using legal procedures and treaties in order to solve disputes and to avoid wars. She did not believe in unilateral disarmament but instead argued that all decisions on disarmament had to be taken between nations. She wrote several texts on peace efforts and early on she became a member of Sveriges Kvinnliga Fredsförening (Swedish Women’s Peace Association), which had been established by Emilia Broomé in 1898. The two of them collaborated closely for the rest of their lives. In 1907 Anna Bugge Wicksell set up the Lund peace association. She was also one of many who supported the establishment of Svenska fredsförbund (Swedish peace alliance) in 1911, which was an active public campaigner during the First World War. She also participated in various international peace actions and at congresses. During the war she was employed by the Foreign Ministry as an expert in matters of public international law. She also came to play an important role in the discussions surrounding the establishment of the League of Nations.

In 1920 Anna Bugge Wicksell was appointed as Swedish delegate to the newly set up League of Nations in Geneva. She was one of only three female delegates in the general assembly, all of whom were from Scandinavia. She was also the only woman who was appointed as a member of the mandate commission, a decision encouraged by a number of women’s organisations in Europe and the USA. This testifies to the wider international respect she enjoyed.

Anna Bugge Wicksell died whilst working to achieve world peace in 1928. She is buried at the Norra cemetery in Solna. 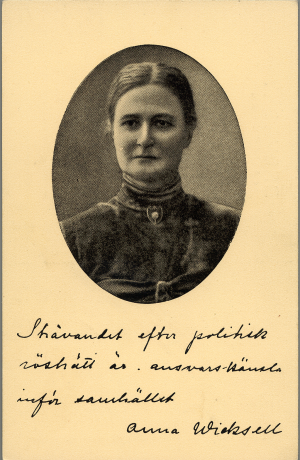