Anna Charlotta Schröderheim was a noblewoman who hosted salons and who was famous for her intelligence and her sharp tongue.

Anna Charlotta Schröderheim was born in 1754. She was the daughter of Christoffer Lorentz von Stapelmohr, deputy director-general of sea tolls, and his second wife Maria Lucretia Dittmer. Their home welcomed many guests, including Carl Michael Bellman, who was believed to be in love with Anna Charlotta von Schröderheim. However, in 1776 she married Elis Schröderheim, a government official who served as ‘förste expeditionssekreterare’ (chief secretary) of the domestic civil administration and increasingly came to serve as King Gustav III’s right-hand man. Carl Michael Bellman composed a wedding poem in honour of the couple.

The Schröderheim home came to occupy a central position within Stockholm’s social scene. Although Anna Charlotta Schröderheim had been officially received at the royal court and sometimes participated in court life, she does not play a prominent role within the memoires and diaries dating from Sweden’s Gustavian period. Instead, the couple played a leading role within the semi-aristocratic, semi-bourgeois social scene outside the royal court.

Anna Charlotta Schröderheim’s life came to a tragic end. She had embarked on a number of romantic liaisons throughout her life, which her husband appears to have tolerated. In 1790 she was seemingly involved in a relationship with the royal secretary Carl Wilhelm Seele. However, when she gave birth to a baby girl on Christmas day that year Elis Schröderheim refused to recognise her as his own and demanded a divorce from his wife. The baby was to be declared still-born and her mother was to move into the countryside where she would be provided with a pension of 10,000 daler copper coins. However, the divorce never came into force as Anna Charlotta Schröderheim died just a week after having given birth. 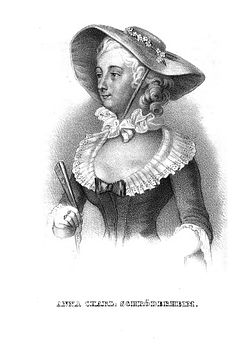