Anna Dahlström-Nilsson was the second woman in Sweden who medically qualified as a doctor. She gained her degree in 1908 at Uppsala university, and thus became the thirteenth woman in Sweden to gain her medical qualification. She had been preceded by Anna Stecksén, a doctor who had gained her medical degree in 1900 at Karolinska Institutet (the Karolinska Institute) in Stockholm.

Anna Dahlström-Nilsson grew up in a well-to-do home at Stigbergstorget 7 in Gothenburg. The so-called Gathenhielm building in which the family lived had belonged to the Dahlström family since 1846. The family owned a range of properties and plots of land which were leased out. Anna Dahlström-Nilsson became the owner of the Gathenhielm building from 1905 onwards and lived in it until her death in 1941. The building also served as the premises for her ophthalmology surgery.

Anna Dalström-Nilsson began her education at the Majornas elementarläroverk för flickor (elementary school for girls) in Gothenburg. The school had opened in 1866 and its board included the rope-manufacturer Charles Åhmansson, who served as treasurer. Charles Åhmansson was married to Anna Dahlström-Nilsson’s paternal aunt, Johanna Dahlström. Anna Dahlström-Nilsson subsequently attended the Wallinska school in Stockholm, where she gained her school-leaving certificate in 1886. Then she continued her education variously at Stockholms högskola (college), Uppsala university, and Karolinska Institutet. In 1899 she was awarded her medical licentiate and became a qualified doctor. Anna Dahlström-Nilsson specialised within ophthalmology, namely the eyes and their diseases. Her specialisation resulted in her heading out across Europe in order to attend various courses. Seeking to obtain professional qualifications Anna Dahlström-Nilsson carried on her academic studies and gained her doctorate in 1908.

Anna Dahlström-Nilsson belonged to that generation of women who have come to be described as pioneers. Despite serious opposition women were able, with the benefit of a good background such as well-to-do parents, to continue their studies, gain doctorates, and prepare for a professional career. Nevertheless, contemporary legislation still ensured that many routes to a career remained closed to women. One of the earliest spheres to become accessible to female professionals was the medical one. Anna Dahlström-Nilsson was fortunate enough not to have to struggle for her income and was driven by other impulses. In retrospect we see a woman who was able to alternate between various different forms of service, often of a temporary nature, and who was able to finally work as a professional doctor. She was awarded the Illis quorum medal of the fifth degree in recognition of her “sacrifice and useful endeavours on behalf of items of cultural significance within Gothenburg city”.

Anna Dahlström-Nilsson died in 1941. She is buried at the Stampen cemetery in central Gothenburg. 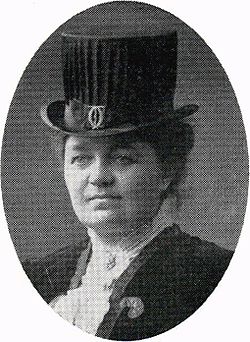