Anna Gustafson was a multi-talented dairymaid who became the county dairymaid of Norrbotten in 1892. During her almost 30 years in that post she played a decisive role in the modernisation of that county’s dairy production.

Anna Gustafson was born at Kållandsö in 1860. She was the seventh of nine children of Lars Gustav Andersson and Maria Jonasdotter, both farmers. Having attended school in Otterstad and worked at her parents’ farm Anna Gustafson was enrolled as a student at the Degeberg dairy in Västergötland in 1877. Edward Nonnen, an agronomist, had opened the first agricultural institute there in 1834, and in the 1860s the adjoining dairy school was opened. Anna Gustafson continued her dairy training at the Kilagård dairy and further at the Havarthigaard and Ribe dairy schools in Denmark.

Following a stint as a dairymaid at Backa estate in Västergötland Anna Gustafson returned to Degeberg to run the dairy and contribute to the practical teaching. In 1884 she was appointed to Hedensberg dairy station in Västmanland. It was not long before she moved on to the newly established state-run dairy school at Huså works in Jämtland, and from there she went on to the dairy school at Robertsfors in Västerbotten. At the latter she became manager and national dairymaid instructor.

Becoming a dairymaid was one of the few professions open to women as a career. 15 years after beginning her professional career Anna Gustafson attained the top when, in 1892, she was offered the post of county dairymaid in Norrbotten county Hushållningssällskap (rural economy and agricultural society). This is where she undertook her major professional work.

In Norrbotten the Hushållningssällskap had struggled for a long time to develop the dairy industry – practically all milk in the area was still being produced at home and the country folk harboured great suspicions about and reticence to change. It was believed that a woman was required in order to get the housewives to follow advice. Agricultural engineer Emil Berggren suggested that Anna Gustafson should be appointed county dairymaid. She was and remained the sole female official within the Hushållningssällskap during her period of involvement.

Anna Gustafson energetically worked to set up and support the establishment of dairy associations and the opening of new dairies. She was often the chair at meetings when association were being set up and she often became a part owner. She arranged the architectural drawings and loans, supervised, and served as the Hushållningssällskap inspector, ordered machinery, and so forth. She also helped the various associations to find a market for their products.

Subsequently efforts began towards conglomerating the county dairies, to end internal competitions and strengthen their position with regard to the Finnish market. Initially this failed, but in 1911 a committee consisting of two farmers and the county dairymaid developed statutes for Norrbotten county Mejeriidkare- och Mjölkproducentförening u.p.a. (dairy and milk-producer association). This association was transformed into Norrbotten county Producentförening, of which Anna Gustafson was a permanent honorary member. This association was merged into Norrmejerier in 1992.

The shortage of trained dairymaids was one of the early obstacles to Anna Gustafson’s modernisation efforts. In 1895 the dairy school in Björkfors near Kalix was opened in order to remedy this problem and ran until the early 1900s. Anna Gustafson was the school director and main teacher.

Anna Gustafson’s friend and colleague W.L. Wanhainen wrote these words about his friend: “The motto for her work in all spheres was knowledge is power”. Anna Gustafson’s educational contribution went far beyond the dairies. She believed that all areas of the rural economy needed to be strengthened and that the key to this lay in the home. Anna Gustafson often gave talks and ran courses, wrote articles, and arranged study trips for the dairymaids and housewives in the county, whilst she continuously expanded her own knowledge. She sought to educate, develop, and improve rural living conditions, particularly through interaction with housewives. Her core subjects included gardening, handicrafts, as well as cooking, hygiene, and home finances. Anna Gustafson led 16 study- and local-trips for the female smallholders of the county between 1908 and 1912. These trips comprised visits to model farms, agricultural- and handicrafts exhibitions, as well as cultural events such as museum and art gallery visits.

During the 1902-3 period Norrbotten suffered from extremely poor harvests. Anna Gustafson, who was almost constantly in transit for her work, saw the dire need up close. She and Governor Karl Johan Bergström were two of the main instigators of the aid work that was carried out during the resulting famine. Norrbotten county council began a mobile school kitchen in 1912 in order to improve the local population’s poor diet. Anna Gustafson served as a member of the school kitchen board from the outset and was its chair until 1929. During the First World War food shortages were common in many parts of the country and in Norrbotten Anna Gustafson played a central role in the food preparation courses which Folkhushållningskommissionens kvinnoråd (national rural economy and agricultural society women’s council committee) organised in conjunction with the Hushållningssällskap during the so-called ‘dyrtid’ (famine).

Anna Gustafson was an important figure within the Husmoderrörelse (housewives’ movement) and her involvement played out both locally and nationwide. As a member of the central board she participated in and contributed to lectures given at many of Sveriges Husmodersföreningars Riksförbund (Housewives’ associations of Sweden national association) courses and congresses during the 1920s and 1930s.

Anna Gustafson was keen to highlight the crucial importance of women not just within the home but also within wider society. She was inspired by women such as Frigga Carlberg, Ellen Key, Elin Wägner, and not least Fredrika Bremer. Anna Gustafson was one of the founders of Norrbotten county Fredrika Bremer-Förbund (association) stipend fund, which awarded an annual study stipend for women. Anna Gustafson was also one of the driving forces in the fight for womens’ suffrage in Luleå. In 1907 the Föreningen för kvinnans politiska rösträtt (FKPR) (association for women’s suffrage) was established in Luleå with Anna Gustafson as chair of the interim board. It was not long before the chair was taken over by the energetic teacher Märta Bucht, but Anna Gustafson remained on the board.

Anna Gustafson served as secretary of the Norrbotten county handicrafts association for many years. She was particularly interested in handicrafts and would often buy beautiful items on her work travels. Many of these can be seen today (2017) in the Norrbotten museum collections. She also wrote a range of articles for both the local and national press about Norrbotten local handicrafts, whilst also arranging displays and courses in such things as using natural dyes. Her interest in handicrafts was integral to her local activism. In 1912 the first local folk dress was presented and the leading names on the folk dress committee were Anna Gustafson, David Törnqvist, and Alma Ehinger. The 1912 Norrbotten folk dress was a development in the national romantic spirit, and despite research into local traditions it included clear influences of the Jugend and Dalarna styles. The folk dress quickly gained popularity and began to be sewn at public colleges, rural economy and agricultural schools and at the county’s ‘arbetsstugor’ (charitable children’s poor relief institutions).

In 1915 Anna Gustafson was elected onto the Norrbotten museum association where she became the first woman on the board. The association secretary was her close friend since her time at the Björkfors dairy school, David Törnqvist. They ran a joint project to create an open-air museum at Gültzauudeen, which was realised by the time of Luleå town jubilee exhibition in 1921. Anna Gustafson put in significant work into not only the jubilee exhibition but also as a member of the exhibition board and in the dairy-products and handicrafts groups. The local history site remained at Gültzauudden until around 1970 when the old buildings were moved to Gammelstad in order to create the Hägnan Open-Air Museum.

Anna Gustafson was politically on the right. She was involved in the Allmänna valmansförbund (general electoral league – precursor to modern-day Moderaterna) and she was a member of Norrbotten county Moderate electoral association women’s council. She was also a member of the Luleå town council and was given the entrusted position of opening the first meeting of 1929, which was the same year she left that town.

Anna Gustafson moved to Nacka in her twilight years. She died at Kållandsö in 1944. 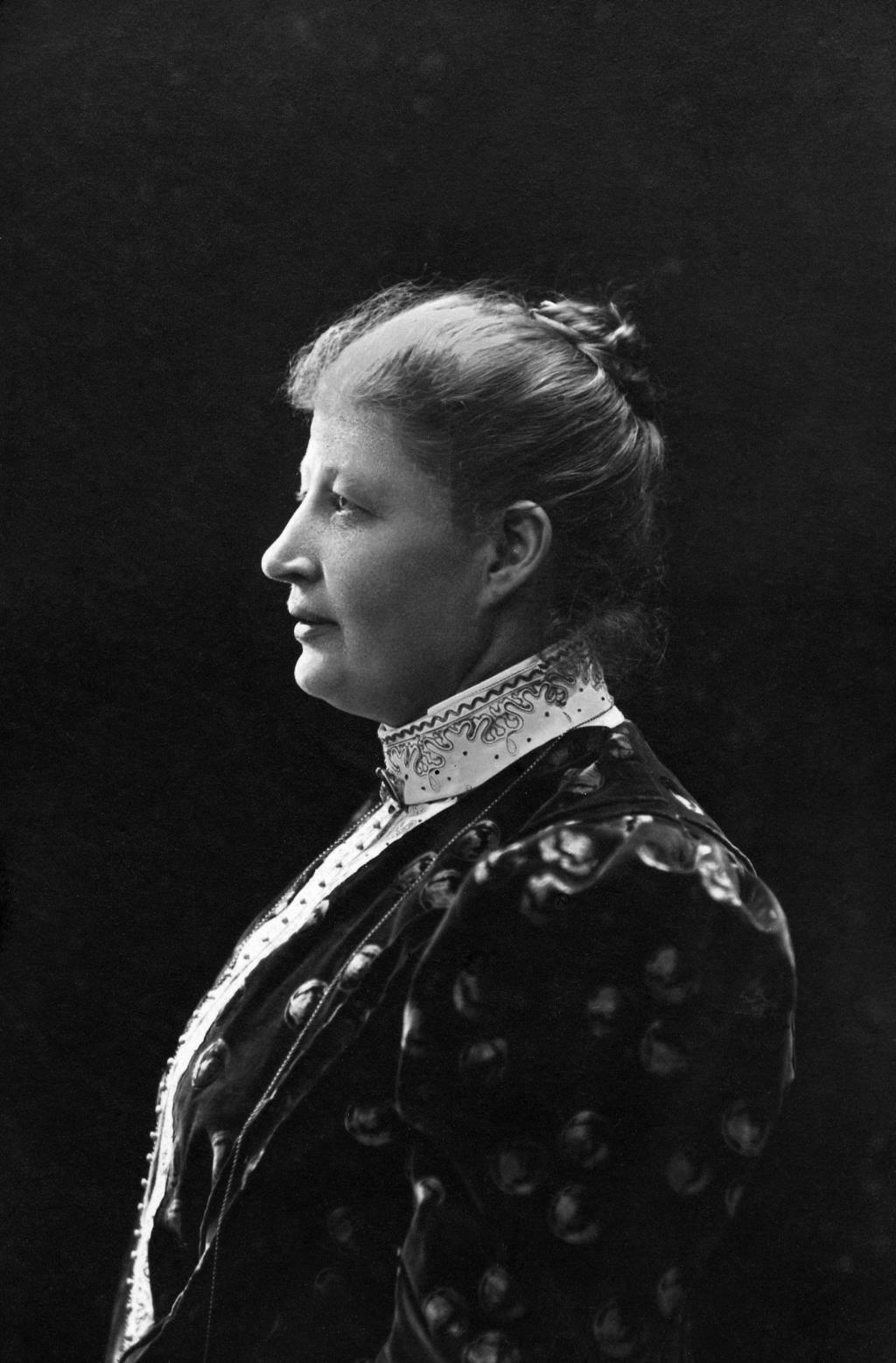