Anna-Lena Peterson was a deaconess who worked for the Swedish Israel mission in Vienna. She participated in among others a rescue transport of Jewish children to Sweden and contributed to the social rebuilding of Vienna after the second world war. She was awarded two Austrian distinctions for her contributions.

Anna Helena (Anna-Lena) Peterson was born on 24 March 1904 in Årstad near Falkenberg. She was the second of six children. She later changed her surname from Andersson to Peterson, after her father Peter who was a farmer. After completing her schooling, she continued her studies at the Gothenburg deaconess institution (now Bräcke diakoni) and studied healthcare in Lidköping. During her time studying in Bräckö, she came to know the deaconess-to-be Greta Andrén. She was made a deaconess in 1930 and worked as the matron at the orphanage Furuhöjd in Alingsås. In 1938, she was recruited to the Swedish Israel mission’s work in Vienna.

When “Sister Anna-Lena” arrived in Vienna in July the same year, the city was marked by three months of Nazi rule. On the streets, swastikas were flaunted and uniformed men dominated the city. The Nazi racial laws had come into power and Jews were harassed and humiliated in public. The Swedish Israel mission’s congregation at Seegasse 16 consisted mostly of Jews who had been baptised. By Jews they were no longer regarded as Jewish and therefore they stood without the possibility of healthcare and aid to the needy from the Jewish organisations. In Nazi eyes, they were however still Jews and were persecuted as such. The Swedish Israel mission’s work concentrated therefore on helping this group. Anna-Lena Peterson worked with Greta Andrén, Malla Granath, Johannes Jellinek, Elsa and Göte Hedenquist, and Johannes Ivarsson. Their work included assistance with lodgings and necessities, and also organising visas.

The deaconesses’ work consisted of visiting the sick, mental health care, and helping the poor. During the first years of the war, the mission organised exit permits for first and foremost Jewish children and young people. Anna-Lena Peterson accompanied a child transport with 60 children to Sweden in February 1939. She witnessed many difficult and final farewells and how the group was harassed during the journey, as later described in Meine Tätigkeit für die Schwedische Israelsmission.

In the autumn of 1939, Anna-Lena Peterson’s main task was to be responsible for the mission’s home for the elderly, “Schwedenheim” in Weidling, north of Vienna. The older members of the congregation lived there, of whom many had had their homes confiscated by the Nazis. The idea was for them to have a refuge outside the city. On account of several Nazi sympathisers among their neighbours however, their existence was threatened. The residents’ radio apparatuses were confiscated during a raid, but were handed back since they were Swedish property. The harassments were initiated by a neighbour, a doctor connected with SA, who disturbed their night’s rest by throwing stones. Likewise, the lack of food was obvious, but thanks to friendly farmers and shopkeepers, they were able to organise food supplies for a household consisting of 25 persons.

When most Jews had been deported from Vienna, the mission station in Seegasse was closed by the Gestapo in July 1941. The staff were compelled to travel back to Sweden. Anna-Lena Peterson was however given permission to spend the autumn moving the elderly from Schwedenheim to Seegasse. On 25 November, she left Vienna to continue working in Alingsås with Jewish refugees and so-called war children from the Nordic countries. At the end of the war, Anna-Lena Peterson was sent to Malmö to receive the survivors who had been transported by Folke Bernadotte’s white busses. She was also the matron at a refugee home in Korsnäs outside Falun.

Anna-Lena Peterson returned to Vienna in 1946, this time working for Save the Children. Tens of thousands of children were fed and clothed by their staff, who were called “the white angels”. In post-war Vienna, some of the members of the Seegasse congregation had also survived. Some had chosen to go underground and they were called “submarines”. The reunions were however few since most of the members had been killed or emigrated.

When the Swedish Israel mission decided to resume work in Vienna, Anna-Lena Peterson was a key person in the rebuilding. Schwedenheim had functioned as a barracks during the Soviet occupation and had been vandalised. After repair work, it was reopened in 1958 and Anna-Lena Peterson continued as its matron until her retirement. She reported regularly on the activities there in Missionstidning för Israel. With the Austrian clergyman Felix Propper who had come as a refugee to Sweden in 1939, their work continued among the Jews, now with a more subdued missionary profile. She also collaborated with the clergyman Adolf Rücker.

Anna-Lena Peterson was acclaimed for her efforts for the people of Vienna and was awarded two medals: the Julius-Tandler-Medaille, to people who have unselfishly served the town’s needy; and the Austrian Federal Republic’s honorary decoration in silver (Silbernes Ehrenzeichen), presented by President Franz Jonas in 1969.

Many other Swedes worked with aid and rehabilitation in Vienna after the war. During her 20 years there, Anna-Lena Peterson gathered around her a circle of women first at Café Landtmann and later in her own flat. Apart from socialising, traditional festivals were celebrated like Lucia and Christmas. The group consisted at most of 40 persons and was known as “the Wednesday meetings”. This group became the basis of the Swedish church’s Vienna congregation that was established at the end of the 1970s. Anna-Lena Peterson was the coordinating person even after her retirement in 1974.

Anna-Lena Petersson moved back to Sweden in 1988 and died in Gothenburg in 1990. She was buried in Årstad Cemetery. 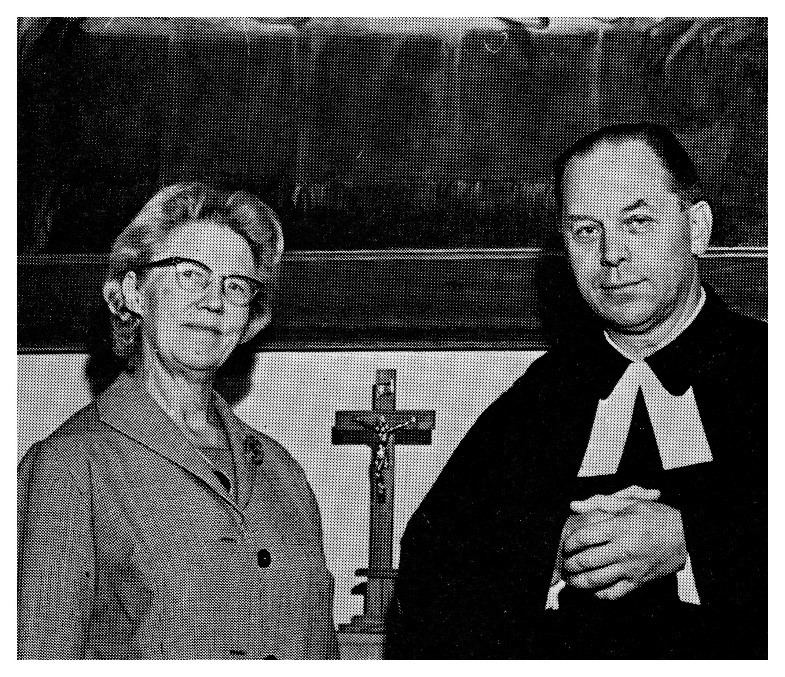