Anna Johansdotter Norbäck, known as Mor Anna or Annamora, was a leader within the free church, a critic of the established Swedish church, and leader of the religious revivalist movement known as the Annanites, whose official name was Evangelisk-lutherska frikyrkan.

Anna Johansdotter Norbäck spent her entire life living in Själevad congregation in northern Ångermanland. She was most likely born on 25 March 1804 in the village of Norrvästansjö in Själevad congregation. The congregational records note her birthday as 24 February 1804 but this cannot be verified in the register of births and baptisms. On 25 March 1804, however, a girl called Anna is noted as born to Johan Norbäck, a bosun, and Anna Nilsdotter in Norrvästansjö, and this is most probably our Anna Johansdotter Norbäck.

Anna Johansdotter Norbäck’s parents were simple, poor and law-abiding folk of whom nothing else is known other than their occupations. Anna Johansdotter Norbäck had four siblings, although only one of her brothers survived into adulthood. The family moved to Kroksta village and the children grew up there. Their mother carried on living in Kroksta after their father died in 1810. Anna Johansdotter Norbäck has been described as a quick-witted and talented child. She easily learned the Lord’s Prayer, the creed and the catechism. At the age of 14 she was confirmed in the Swedish church and in 1819 she began to work as a maid/servant girl, initially at Hörnett and then in Öster-Billsjö. In 1835 she returned to Kroksta to live with her mother, who had remarried in 1821 to a crofter and forest ranger called Pär Olofsson.

Although Anna Johansdotter Norbäck has been described as a cheerful, eager and lively child she also caused her parents to worry through her thoughtless and disobedient actions. When she was with her friends she tended to take the lead, focusing on games and having fun. As an adult she was described as strong, independent and stubborn, and possessing quite a powerful and outspoken manner of expression, if posthumous accounts are to be believed. Her leadership qualities and her firm belief in God led her to be a pioneer and a source of inspiration to other women, including, in particular, Hanna Lindmark – the founder of Margaretaskolorna.

In 1831 the two ʻnyläsare’ (pietist activists) Maja Lena Nilsdotter and Maja Stina Pehrsdotter came to Själevad and Arnäs from Västerbotten. Anna Johansdotter Norbäck, who had undergone a conversion, sought them out and attended their conventicles. It was not long before she became a leading figure herself. It was through these conventicles that Anna Johansdotter Nybäck learned the ʻnyläsare’ preachings and adopted a strong critical view of the established church.

From 1892 onwards there are clear signs of change. Anna Johansdotter Norbäck attended services in Nora in the company of Pehr Brandell, a priest and revivalist preacher of the established church. Anna Johansdotter Norbäck increasingly came to distance herself from the Swedish church, however, and after 1835 she stopped attending church services. She even ended her communication with Pehr Brandell in 1837 and turned strongly against established priests in general.

Anna Johansdotter Norbäck was a powerful congregational leader of the free church which, at its height, numbered 600 members primarily resident in Arnäs and Själevad parishes in northern Ångermanland. The members displayed a strong belief in her and her judgements, even when it came to so-called mundane matters such as marriages and jobs. She was seen as an instrument of God. She and the Annanites enjoyed widespread respect and her completely sober and orderly lifestyle probably formed a major element in this respect. However, views of Anna Johansdotter Norbäck were not uniformly positive and she faced heavy criticism from several church leaders. Her relationship with both Bishop Israel Bergman (bishop of Härnösand diocese 1848–1864) and Bishop Anders Fredrik Beckman (bishop of the same diocese 1865–1875) were nevertheless mutually respectful.

Anna Johansdotter Norbäck was not only a leading figure within the free church congregation, but she was also a spiritual guide, a leader of services, a preacher, and responsible for the recurring congregational tests of Christian knowledge. Apart from Sunday School there were no other children’s services provided. When the Annanites began to hold their own communion services in 1854 Anna Johansdotter Norbäck offered individual confessions for those who wanted to partake. Nevertheless, communion was physically distributed by men.

Under Anna Johansdotter Norbäck’s guidance the Annanites constructed a prayer house of their own, by raising funds totalling 7,000 kronor, and built on ground donated by D. Tjernström in Högland village. The building was ready for use in 1866 but was not completely finished until 1880. It could accommodate about 300 people. Further, stables and two refuges were built which included open fires and rooms and contained sleeping cots attached to the walls in a staggered fashion.

Under Anna Johansdotter Norbäck’s leadership the congregation ran schools in Arnäs, Grundsunda, Sidensjö, and Själevad congregations during the 1873–1880 period. This was at a time when the state church was still largely responsible for schooling and education. The Annanite schools were run by hired qualified female teachers who were not themselves members of the Annanite sect.

Anna Johansdotter Norbäck enjoyed good health for many years but during a service in 1876 she suffered a stroke which impacted on her ability to speak. Despite this development she remained in a strong leadership position for the rest of her life, continuing to hold religious services, teach, and hold individual confessions, as well as manage the Annanites in all matters both major and minor.

Anna Johansdotter Norbäck, or Mor Anna, died at her home after sustaining a fracture, in January 1879. 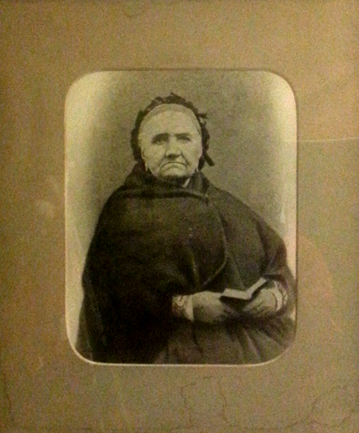