Anna Kaijser was a physician and the first woman with children to qualify as a doctor in Sweden. She became a medical student in 1894. Three years later, she married and had two children before qualifying in 1901 as a physician at Karolinska Institutet.

Anna Kaijser was born as Anna Lovén in Stockholm in 1870. Her father Christian Lovén was a physician, researcher and professor of physiology at Karolinska Institutet. He was an open-minded liberal and a convinced Darwinist. He had met women medical students in Zurich in 1872, and he had advocated women’s right to study and hold public office since then. Anna’s mother Hanna, née von Julin, grew up at Fiskars Bruk in Finland. During her youth, Anna Kaijser spent a good deal of time with her cousins in Finland, among them Gustaf Mannerheim, later Marshall of Finland. She had one sister, Hedvig, who was educated as a pharmaceutist.

Anna Kaijser attended the Åhlinska School and thereafter the Lyceum for girls in Stockholm. She matriculated in 1889. Anna Stecksén was one of her classmates. At the Lyceum for girls, another pupil was her future physician colleague Ada Nilsson, with whom she became close friends. Alma Sundquist, Mathilda Lundberg and Signe af Klintberg were other medical students in her social circle at KI. Anna Kaijser’s first appointment was as a stand-in for Ada Nilsson at the Serafimer hospital in the summer of 1901, under the leadership of the well-known gynaecologist Mauritz Salin.

Even before qualifying as a doctor, Anna Kaijser was engaged in the issue of women doctors’ right to public office. She was the chairwoman of the working group that formulated the final text of a petition that was handed over to the King (Kunglig Maj:t) at the end of January 1901. It was signed by 31 persons and led to most medical positions being opened to women in 1903. There was one important exception — married women doctors were not permitted to hold a public appointment.

After her marriage, Anna Kaijser and her husband, hospital doctor Fritz Kaijser, moved to Härnösand. For the first four years of her marriage, she commuted for several months each year to Stockholm to complete her studies. Most people in the couple’s acquaintanceship thought that this was completely unnecessary. In their opinion, a married woman’s main task — and perhaps her only one — was to take care of her husband and children, not to work professionally.

After qualifying, Anna Kaijser opened her own practice and was also employed by her husband to work for periods as a non-specialised doctor at the hospital in Härnösand. After receiving royal exemption from Kunglig Maj:t, she gained the right — despite being marrried — to work as a school doctor for the girls’ school in Härnösand from the autumn of 1905. She was well liked as a school doctor and held that appointment until her retirement in 1935. She also taught for many years at the nursing college Sjuksköterskeseminariet in Härnösand.

Anna Kaijser saw as one of her main tasks the spreading of knowledge to other groups, especially women, on social and medical issues. She often held lectures that were very popular on infant care, women’s hygiene (sexual education) and temperance matters around the county. She had great interest in the community and was among other things a member of the women academics’ association Akademiskt bildade kvinnors förening (ABKF, nowadays Kvinnliga Akademikers Förening, KAF) and the cooperative food store Kvinnornas andelsförening Svenska Hem at which she was a good friend of the manager Ina Almén. Anna Kaijser was also a member of the women’s suffrage association Föreningen för kvinnans politiska rösträtt (FKPR, a local branch of the national Landsföreningen för kvinnans politiska rösträtt, LKPR). She stood as a candidate at the municipal election in Härnösand. In 1910, she was elected as a member of the school board on which she sat for many years. Her husband Fritz was the chairman of the town council in Härnösand for 22 years.

Anna Kaijser had seven children, one girl and six boys. Two of them, the girl and one of the boys, died of tuberculosis. She never got over the loss of these children. When the second child fell ill in the spring of 1912, she was on a study trip in the USA with her husband and two other doctor colleagues. She travelled on the Atlantic steamship Lusitania that left Liverpool one week before the Titanic. When she arrived home, her son was dying.

Fritz and Anna Kaijser moved to Stockholm in 1943. The couple’s five sons started their own families and Anna Kaijser eventually had 19 grandchildren. In a private letter after her death, her son Olof Kaijser wrote that he appreciated his mother not only for "her knowledgeableness and being a very cultivated person but also for her wish always to see the best in everybody she met, and her capacity to be tolerant towards the shortcomings of her fellow human beings, and her personal humility and tactfulness. She was what one usually calls a good listener, i.e., she was always interested in hearing and understanding other people’s opinions."

Anna Kaijser died suddenly after a fall in her home in 1947, at 77 years of age. She lies buried in the Old Cemetery in Härnösand. 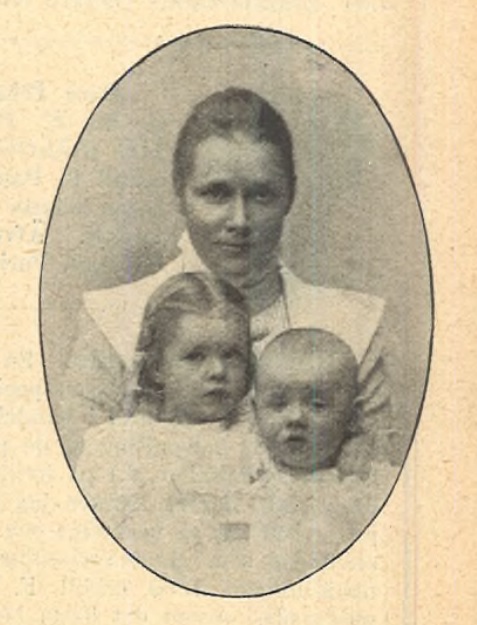