Anna Catharina Ekberg was a poet, an animal rights activist, and the author of an early vegetarian cookery book and handbook in Swedish.

Anna Ekberg was born in Jönköping. She was the daughter of Elisabeth Mariam Nilenius and Jöns Nilsson Nilenius, an assistant school-teacher and curate who had gained a PhD from Lund university. Anna Ekberg was eleven years old when her father died, leaving her mother a widow with three children to care for.

Anna Ekberg trained as a telegraph operator and worked in that profession in Stockholm before becoming engaged to Karl Axel Ekberg, a fire insurance inspector from Skokloster. They married in 1889 at Trehörna parsonage in Östergötland. The couple hired Edla Augusta Bergqvist from Trehörna as their maid and settled in Södermalm, Stockholm. They then moved to Ekhyddan in Stocksund and finally to the Grane 28 area where they lived at Villa Gullinge on Granevägen in Djursholm garden city.

Anna Ekberg became part of the social reform intelligentsia of the Djursholm garden town. She joined Nordiska Samfundet till bekämpande af det vetenskapliga djurplågeriet (now Djurens Rätt, animal rights society) and wrote numerous tributes, poems and hymns. She was an active member of the society’s second circle and became friends with and a colleague of Christian and Elna Tenow. Through her children she became friends with Elsa Beskow’s husband Nathanael Beskow, principal of Djursholms samskola (coeducational school). Her social activism was founded in the Christian religion of her childhood and, partly influenced by fellow activist and society member Lizzy Lind af Hageby, it took a theosophical turn.

The recipes in Anna Ekberg’s 360-page tome are primarily based on vegetables with minor additions of animal produce from living animals, such as dairy products and eggs, and relied on steaming to better retain nutrients. The introduction championed “properly constituted nourishment, taken solely from the vegetable kingdom, or supplemented by produce from living animals”. At this time raw food was divided into non-vegetarian and vegetarian. Products originating from killed animals were termed non-vegetarian whilst those which originated from the vegetable kingdom as well as from living animals were termed vegetarian. Anna Ekberg’s introduction included a range of choices which half a century later came to be called vegan, a term coined in England in 1944.

Anna Ekberg also referenced Plato, Socrates, and Pythagoras in her book whilst highlighting the reality of the origins of meat and fish products by writing “killed animals” instead of “dead animals”. The lemon, citrus medica, was given particular commendation as the “treasure of the vegetable world”. She offered advice about a transition diet and a diet for infants, provided menus for simpler dinner to suit the calendar, menus for celebrations both in wintertime and summertime, and she offered a wide variety of recipes such as mushroom croquettes, rice croquettes, imitation meat-pie and oxtail soup, vegetarian sausages and ‘herring’ salad as well as imitation fish mince.

Several daily newspapers carried adverts for Hvad skola vi äta?, including Smålandsposten on 3 July 1899 which stated: “A book which could be useful to have at home, and elsewhere”. The first edition received a mixed reception – both with regard to the subject of vegetarian food as well as to the book itself. The Svenska Dagbladet newspaper’s review on 3 July 1899 harshly criticised the vegetarian options albeit there was admiration for the great number and variety of meals the book offered. Under the Aftonbladet newspaper’s headline of “Art and literature” on 5 August 1899 it was claimed that several vegetarian cookery books in Swedish were already available, amongst which the reviewer includes Adolf Fredrik Melander’s Naturmedicin from 1867 and J.O. Rydelius’ 1893 Reformköket from and Helsolif from 1895 (published under the pseudonyms of Ikke Koch and Justus). The review also stated that they could be viewed as propaganda for reduced intake of non-vegetarian food rather than as cookery books proper. Decades later Anna Ekberg’s daughter, Ellen Börtz, as part of a journal debate described and commented on reactions to the vegetarian lifestyle of her childhood about how the pioneers of vegetarianism were subjected to “the most extreme mockery and ridicule”.

Anna Ekberg’s politics was expressed in her poetry published in Samfundet till bekämpande af det vetenskapliga djurplågeriet publications and its members’ magazine. She wrote a “tribute to two friends”, dedicated to Leisa Schartau and Lizzy Lind af Hageby, for the society’s annual general meeting held on 27 October 1903: “Det sjuder häftigt i månget sinne / det brusar mäktigt en storm därinne / det svallar våldsamt i mången barm / af obetvinglig, rättmätig harm / af tröstlös sorg och af motståndslusta / af önskan varm att till strid sig rusta / mot våldsmakt, grymhet och all den skam / som far otygladt och hedjlöst fram” (There are strong stirrings in many minds / a mighty storm is gathering within / a violent tide is rising in many bosoms / of indomitable, justifiable outrage / of inconsolable sorrow and of rebellion / of heated desire to take up arms / against tyranny, evil, and all the shame / coursing forth in unbridled and rampant fashion). In 1904 she dedicated a critical ode to the concept of progress which involved science that took no consideration of animals, “bakom sina lärdomens tempel rymmer klagan och pina, vanvettig forskning och tro. Och vetenskapsbanan så blodig, hvart leder den banan, ja hvart? / grymhet öfvas, makt är rätt…” (behind the temple of knowledge is a world of complaint and pain, insane research and belief. And this oh-so-bloody path of science, where does it lead, yes, where? / evil is exercised, power is right …). The society’s motto – that morality most come before science and justice before power – could have been devised by Anna Ekberg.

The ensuing decade served as a revenge for Anna Ekberg’s book – time had caught up with her ideas and the message of vegetarianism had spread. In 1906 Hvad skola vi äta? was published in Norwegian, edited by Anton Hoffman. That same year Ellen Asker published Ellen Askers Vegetariska kokbok – she, just like Anna Ekberg and Leontine Deutgen, also lived in Djursholm, then the vegetarian ‘Mecca’ of Stockholm. Deutgen also ran a healthfarm there. A new edition of Anna Ekberg’s 1899 cookery book was released in 1908, as the previous edition had sold out, and a more affordable edition was also produced. This time the reviews were approving: “well-written”, as Svenska Dagbladet put it on 30 December 1908, and: “without doubt the best vegetarian cookery book in Sweden", according to Stockholms-Tidningen on 12 October 1910.

The reviews for Hvad skola vi äta? appear to have contributed to another stream of new cookery books: Elisabeth Hansen’s Vegetarisk kokbok was published in Malmö in 1908, Ellen Turner’s Vegetarisk kokbok, which included recipes for home-made vegetarian sausages, was published in Stockholm in 1913, and Valma Krank’s Vegetarisk kokbok för hem och skola was published in Helsinki in 1913. Johan Lundström Saxon, the founder of Samfundet för befrämjande af naturenliga lefnadssätt in 1895 (later known as Svenska Vegetariska föreningen SVF, Swedish Vegetarian Society), had published a book on the subjects of food and health in 1910. This society – of which Anna Ekberg was a member – opposed forcible vaccination practises and fruit tolls whilst promoting farming without animals. The annual general meetings were held at Kungsgatan and at Skansens Högloft restaurant, where guests included the likes of the author Maurice Maeterlinck and the mayor of Stockholm, the Social Democrat Carl Lindhagen, who was the brother of Anna Lindhagen.

The issue of vegetarianism can be seen as a part of that era’s reform movement which sought increased social equality. Vegetarian food and the use of steam cookers meant there was less need for servants and also led to improved social and personal finances. Feminists and women’s rights activists adopted vegetarianism for the sake of animals and their own health but also because it saved them time, effort and money and allowed them to prioritise voluntary work and activism. In 1909 Anna Ekberg was involved in the women’s rights journal, Kvinnligt yrkesregister, for which she supplied a piece called “Vegetarisk matlagning”. The ensuing publication contains an article by Ada Nilsson, member of the Fogelstad group, called “Om vår föda” and it warmly recommends vegetarian food.

In 1920 – the same year she became a widow – Anna Ekberg published a collection of her poetry entitled Livstoner, några dikter 1913–1918 through the author-owned and cooperative publishers Svenska Andelsförlaget (now known as Bokförlaget Natur och Kultur). The publishing house had been founded by Jenny Bergqvist Hansson and Johan Hansson, both active members of Svenska Vegetariska Föreningen. Jenny Bergqvist Hansson was also active within agricultural reform and the women’s suffrage movement, and she was an outspoken anti-Nazi, which was reflected in the publications. Anna Ekberg’s poetry collection was reviewed in Aftonbladet on 7 May 1920, in which it was referred to as a unique and remarkable collection of hymns.

Anna Ekberg lived and worked at Villa Gullinge in Djursholm until her death in 1947. In addition to the legacy of her two books and vegetarian lifestyle she left behind four children, one of whom was the vegetarian, public-school teacher, artist, and animal rights organiser Ellen Börtz. 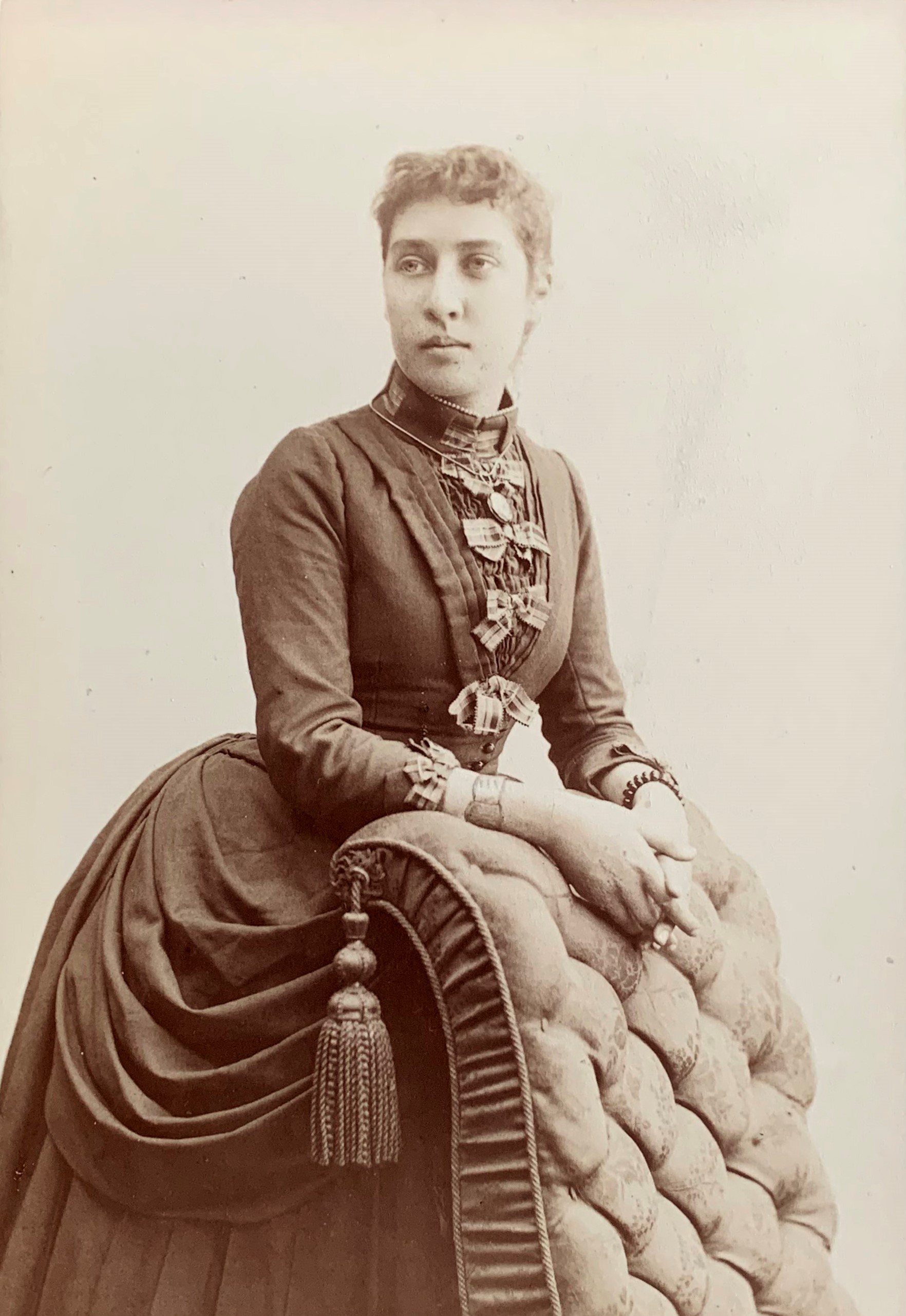