Anna Lenah Elgström was a writer, an author, a cultural personality and a feminist.

Anna Lenah Elgström was born in Helsingborg in 1884. She was determined to become an artist from an early age and so she trained to become a visual artist at Tekniska skolan (today University College of Arts, Crafts and Design), Högre konstindustriella skolan (today also part of University College of Arts, Crafts and Design), and Althin’s studio, all in Stockholm. In 1908 she and her brother, the artist Ossian Elgström, travelled to Paris to study art. Whilst there she was active as a glass and mosaic painter. She began to send travelogues from Paris to various Swedish newspapers. This became the start of lifelong and very comprehensive editorial activity, both as an author and a journalist. She married Gustaf Collijn, who worked with theatre, in 1912 and two years later the couple had a daughter called Ragnhild.

Anna Lenah Elgström’s debut as an author came in 1911 with the favourably received book Gäster och främlingar. One of her most well-known works is the trilogy of coming-of-age novels about Elsa Holm entitled Den kloka Elsa, 1928, Elsa & Kärleken, 1932, and Elsa i männens värld 1936. The trilogy told the story of Elsa’s journey from girlhood to young womanhood. The book contains autobiographical elements albeit Anna Lenah Elgström denied this.

Much of Anna Lenah Elgström’s editorial work had a political inclination related to the outbreak of the First World War. As a result of the war she became a radical pacifist with feminist overtones. She participated in and reported from the peace conference at The Hague in 1915, and from the unofficial peace conference in Stockholm in 1916. She was part of the group of women which formed around the internationally active peace advocate Rosika Schwimmer. Along with Elin Wägner and Frida Stéenhoff, she wrote the book Den kinesiska muren, published in 1917, in Schwimmer’s honour. That same year Anna Lenah Elgström, along with other pacifist and socially engaged women, set up Förbundet för humanistisk politik (an association for humanist politics). The association aimed to create a socialist platform based on pacifism and internationalism, which placed spiritual and morally ethical principles in the foreground, ahead of collective understandings. This placed Anna Lenah Elgström within the free-thinking leftist faction of Swedish social politics in the early twentieth century. Heavy emphasis was placed on individual responsibility within those circles.

Anna Lenah Elgström’s pacifism was closely entwined with the type of feminism Ellen Key advocated. It was, to a high degree, a practical application of Ellen Key’s “samhällsmoderlighet” (societal motherliness). This “maternal pacifism” was evident in most of Anna Lenah Elgström’s publications during the First World War right up until the mid-1930s. In her writing she mainly depicts the vulnerability of mothers and children during times of war, and how men oppressed and curtailed women’s freedom of action. An example of this is the short story collection Mödrar, first published in 1917 and then subsequently released in seven new editions up until 1938.

By the mid-1930s Anna Lenah Elgström had abandoned her radical pacifism. When she was in Spain reporting on the newly-erupted civil war, she became convinced that violence and war could in certain circumstances be necessary. In 1936 Anna Lenah Elgström set up Svenska Kvinnokommittén för Spaniens barn (Swedish women’s committee for Spanish children). She was chair of the committee from 1936 to 1940. Anna Lenah Elgström also helped to establish a children’s home in Spain. Previously, in 1919, she had been one of the initiators of Rädda Barnen (Save the Children), for which she was vice-chair for a while.

At the beginning of the Second World War Anna Lenah Elgström became involved in official aid to Finland from 1939 to 1940. She promoted active assistance for Finland, which implied that volunteers should be sent there even to battle. During the Second World War she was also a member of the committee to aid refugees in 1940.

As a journalist Anna Lenah Elgström mainly contributed to Social-Demokraten, later Morgon-Tidningen 1922-1949, and to Sydsvenska Dagbladet Snällposten during the 1950s. She also published a number of pacifist pamphlets.

Anna Lenah Elgström was well travelled and undertook several study trips to Europe, Africa, America and the Soviet Union during the 1920s and 1930s. She produced several well-received travelogues as a result of her travels. Indeed, American literature and culture became her specialism.

Anna Lenah Elgström’s reports and pamphlets often reveal a fundamentally optimistic belief system, which encourages individuals to act. Her literary output is, on the contrary, much more emotionally charged and includes pessimistic depictions of how women and children are impacted by war and male oppression, power and domination techniques. In this regard Anna Lenah Elgström was distinctly critical of society and civilisation in a feminist manner, often even more harshly so than Ellen Key or Elin Wägner. She was closer to Frida Stéenhoff in terms of her critical stance towards civilisation, particularly when it came to highlighting oppressive structures and patriarchal circumstances that prevented women from actively participating in society. Anna Lenah Elgström believed, for example, that without a woman’s right to decide over her own body and soul, gaining the right to political suffrage meant nothing.

Anna Lenah Elgström grew up in a Christian home influenced by the pietistic revival movement. On her mother’s side she was for instance related to Lina Sandell-Berg. Religion also appears in her writings and it was a subject she struggled with. In 1948 she converted to Catholicism. That same year she published her last novel Den målade öknen. During her final years she was a regular contributor to the Catholic journal Credo, which was the forerunner to Signum.

Anna Lenah Elgström died in 1968. There is a street named after her in Örebro. 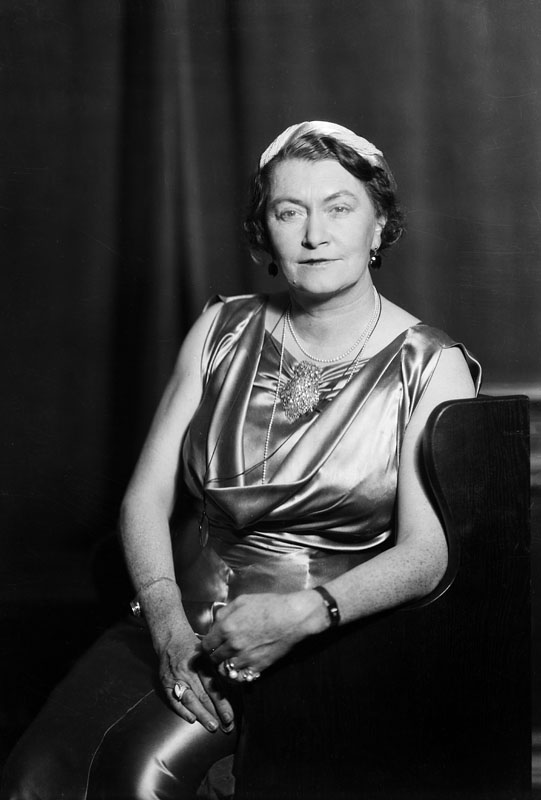