Anna Lindhagen was a politician of the Swedish Social Democratic party who campaigned on issues such as women’s suffrage.

Anna Lindhagen was born in Stockholm in 1870. She grew up in a bourgeois functionary’s family. Her brothers sat for the school-leaving certificate but she was not allowed to. After completing her education at Statens normalskola for girls she instead trained to become a nurse. In 1890 she sat the Red Cross nurses’ exam. That year she became employed at Smedjebacken’s infirmary. She then spent two years working at the newly founded Föreningen för Välgörenhetens Ordnande (a philanthropic society). The purpose of the organisation was to co-ordinate municipal poor relief and private philanthropy. It sought to support people who temporarily found themselves in difficulties.

Anna Lindhagen began working as a socially active children’s inspector during the first decades of the twentieth century. In 1902 she was employed by Stockholm’s poor relief authority’s children’s placement office, where her role was to inspect potential foster homes. She retained this position until the mid-1920s. Her skills were subsequently put to use at the child welfare authority for three years. However, her activism on behalf of children did not finish there. From 1928 to 1931 she was the director of the children’s placement section within the child welfare authority. She spent a total of 30 years working to improve the status of unmarried mothers and children within family politics.

In 1911 Anna Lindhagen was voted onto Stockholm city council on behalf of the Social Democrats and remained there until 1923. She was particularly active on housing matters and campaigned for building affordable living spaces and establishing a housing authority that was free of charge. She also tried to stop the separation of unmarried mothers from their children, campaigned on behalf of temperance, and worked to ensure that the elderly, the sickly, and those who were temporarily in need could obtain help outside the official poor relief. Together with one of her brothers, the parliamentarian Carl Lindhagen, she was active in the peace movement and in women’s rights. She was a member of the board of Sveriges Kvinnliga Fredsförening (SKF, a Swedish women’s peace association) from its inception in 1898 until its dissolution in 1911.

In conjunction with the outbreak of the First World War the international suffrage movement came up with the idea of holding a congress in The Hague in 1915, at which participants from both neutral and warring nations would be able to discuss the possibility of ending the war through neutral mediation. Anna Lindhagen was one of 16 Swedish delegates who travelled to the congress. National sections of the International Committee of Women for Permanent Peace were set up at the congress. Anna Lindhagen was active in this peace work. In 1919 the national committees were re-organised into the Women’s International League for Peace and Freedom (WILPF). Anna Lindhagen was a board member of the Swedish branch of the organisation called Internationella Kvinnoförbundet för Fred och Frihet (IKFF). For a few years, toward the end of the 1930s, she was also the editor of IKFF’s members’ magazine. The organisation Rädda Barnen (Save the Children) was set up after the First World War in order to relieve the suffering of starving children in Europe. Anna Lindhagen left a mark on the organisation both as a board member and as its chair, which she was for five years during the 1920s. She was additionally active in various temporary aid projects for refugees during both world wars and during the interwar period.

Anna Lindhagen was an early protector of Stockholm’s city environment and believed that workers could also benefit from parks and green areas. Already in 1906 she had set up Föreningen Koloniträdgårdar (a society for allotment gardens) together with Anna Åbergsson after having seen how the Copenhagen city authorities had made small pieces of land available to the local population. She was the chair of Föreningen Koloniträdgårdar until 1921. She also proposed motions on environmental protection and the preservation of local heritage in the Stockholm city council. For instance, she promoted the creation of natural parks and of urban gardening areas. During the 1920s she also worked within Stadskollegiet, Rådet till skydd för Stockholms skönhet, the so-called Skönhetsrådet, and Stadsplanenämden for Stockholm’s city environment.

For several years Anna Lindhagen lived at Fjällgatan 34 and at her own expense she furnished a couple of rooms in order to display what educated and culturally active citizens’ living quarters looked like in the 1860s. These rooms are today a museum outside of which there is a sculpture shaped like a medal which emphasises Anna Lindhagen’s efforts on behalf of righteousness, beauty and cultural contributions. Anna Lindhagen’s garden patch lies nearby, a small park which she herself created in the 1930s.

Anna Lindhagen published several minor pamphlets on issues such as the homestead movement, children’s and mother’s rights, the allotment movement, and on various areas in Stockholm. She wrote a book of memoirs entitled Vad vi tänkte. It was published in 1941, the same year in which she died. She is buried in the Lindhagen family tomb at the Norra cemetery in Solna. 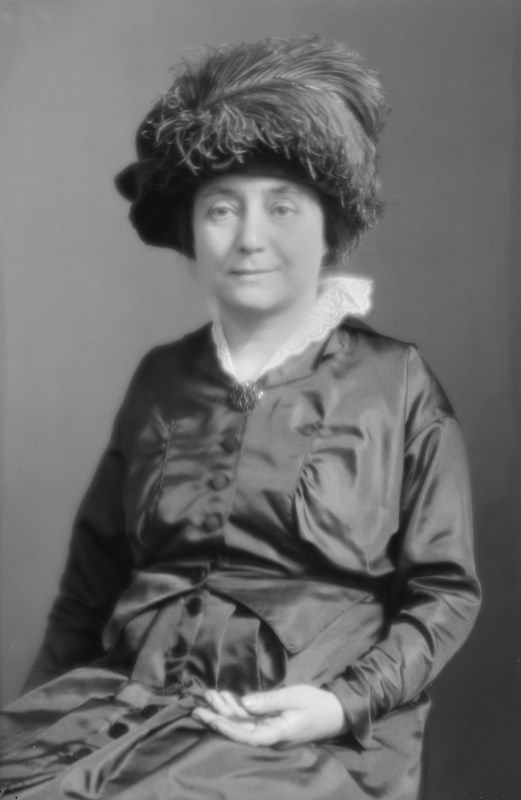