Anna Sodenstierna was a politician in the Liberal people’s party (Folkpartiet) who worked towards improving conditions for children, young people and adults with mental disabilities.

Anna Sodenstierna was born on 5 March 1901 in Falun. Her parents were Josefina Sandström, née Roman and her husband Carl Sandström, an accountant. Anna Sodenstierna was the second of five siblings. Their father worked in a company in Falun, was the vice chairman of the municipal committee, and the auditor for the Falun municipality and he also held a number of other positions of trust. The children’s upbringing was characterised by politically conscious surroundings which certainly must have influenced Anna Sodenstierna’s future choices.

Anna Sodenstierna attended school in Falun but moved to Stockholm when she was 23 years old. There she was appointed as a correspondent at Nordiska Kompaniet (NK). In Stockholm she met Lennart Sodenstierna, an engineer. They were married on 28 March 1929 in Ramsele where her husband had grown up. Their first child, their daughter Gunilla, was born in October 1929. The family first settled in central Stockholm where their son Magnus was born in 1934. Magnus suffered brain damage as a consequence of meningitis and was afflicted by epilepsy. He lived at home during his first years but when he grew older he moved to a care home. He died of an epileptic fit at the age of fourteen.

Anna Sodenstierna was above all engaged in her children during their growing up, but she was also very active in various associations in their local community, first and foremost associations dedicated to charity. During the 1940s, when the family lived on Lidingö, she was active in the so-called ”sewing army”: Syarmén, an organisation in which women, on the initiative of the sewing machine manufacturer Singer and the major daily newspaper Svenska Dagbladet, sewed clothes and other things for the needy. At the beginning of the 1940s, this aid went specifically to Finnish children. She was also the secretary in the Lidingö group of the Swedish Red Cross and in the Lidingö section of the women’s association in case of war: Kvinnoföreningarnas Beredskapskommitté. During the war years, her home was a reception centre for collections of toys for children who had been afflicted by the war.

Like her father, Anna Sodenstierna was engaged in the Liberal people’s party. In 1950 she was elected as the party’s Lidingö representative in the Stockholm county council, a post she held in 1951–1958. She was included in the county directorate for care homes and on its Central Board for the care and education of the mentally disabled. The issues she worked with were those closest to her heart and especially ones concerning care homes for functionally disabled children. Anna Sodenstierna was one of those who propagated early on for getting rid of large institutions and instead making care at home with economic support a possibility. She also handed in motions for grants to small care homes.

In 1958, the same year as Anna Sodenstierna left the county council, she was elected chairperson of the RFBU. At a new election two years later, opinions were divided as to whether or not she was suitable as chairperson. There were several people who thought that she lacked professional experience in that field and would not have sufficient legitimacy to represent the association in important contexts. Anna Sodenstierna was however reelected as chairperson for a further four years. One important issue that RFUB worked for under Anna Sodenstierna’s time as chairperson was increased job opportunities for the mentally disabled. The association wanted the state to finance protected jobs and that was also what happened. In 1962, Anna Sodenstierna resigned from the post of chairperson but remained engaged in the issues. As a 75 year old, she was chairperson of an interim board within the Swedish church and fought for providing the care home Carlslund in Upplands Väsby with its own chapel and church rooms.

Anna Sodenstierna and her husband left Lidingö in 1963 and settled down in central Stockholm. She was widowed in 1972 and died on 3 October 1981. She is buried in Lidingö Cemetery. 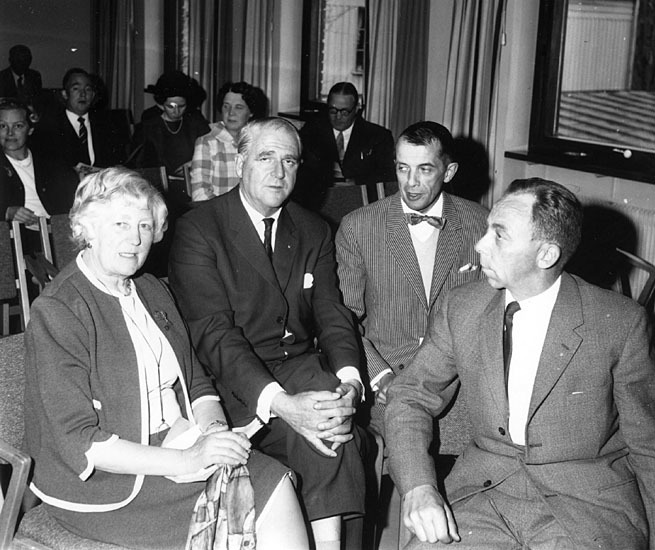