Anna-Maja Nylén was an ethnologist whose focus lay on the history of clothing and textiles.

Anna-Maja Nylén was born in Dalby parish in northern Värmland in 1912. Her father, Theodor Nylén, was a veterinarian. Her mother’s name was Johanna Theresia Nylén. After a number of years the family moved to Kalmar. Anna-Maja Nylén gained her school-leaving certificate there in 1932 and then enrolled at Stockholm högskola (college) to continue her studies. She gained her licentiate degree in art history, for which she wrote an unpublished dissertation on medieval book paintings, in the autumn of 1937.

Anna-Maja Nylén was employed by the Nordic museum (Nordiska museet) in September 1938 and, in 1942, she was given a permanent position there as an amanuensis. She was the first female employee at the museum to be academically qualified. Her licentiate gave her additional expertise in medieval clothing and so her work was focused on the clothing and textile sections. Throughout her almost twenty years of employment folk costumes were her main specialty.

Anna-Maja Nylén’s first published work was a review of E. Nienholt’s Die deutsche Tracht im Wandel der Jahrhunderte, written for Rig in 1938. One of her criticisms of the book was that it only considered what the clothes looked like while ignoring their practical applications. This view reflected ethnological influences, which is perhaps unsurprising given that the Nordic museum had since 1918 been involved in a professorship in ethnology.

Anna-Maja Nylén presented her research into Nordic and comparative folklife studies (ethnology) in her 1947 thesis entitled Folkligt dräktskick i Västra Vingåker och Österåker. Her technical and historical clothing analysis was based on her licentiate work. She combined that material with information on the functionality of clothing and its use in various contexts and within various socio-economic levels of society. By collating archival material on the social standing of individual wearers of items of clothing with a summary of societal changes she was able to depict changes in clothing during the second half of the 1800s.

It was whilst doing a bit of fieldwork in Härjedalen in 1947 that Anna-Maja Nylén became aware of how heavily the local economy depended on traditional animal husbandry and hill farming practises, in which the scythe was a family’s most important tool despite the prevalence of machinery in other parts of Sweden. She quickly initiated extensive investigations in Bruksvallarna. Colleagues from the rural section were sometimes also involved in her work, which she did not complete until 1973. Her work increasingly came to entail the compilation of a contemporary record of the changes and streamlining that occurred within Swedish agriculture following the Second World War.

In 1961 the Nordic museum was reorganised, at which point Anna-Maja Norlén was appointed head of the museum’s Etnologiska undersökningen (EU) (ethnological investigation section). As such she made changes to the composition of questionnaires, the most common tool of ethnological studies, which came to deal with the current situation and not “how it was before”. They also came to include a wider range of social classes in addition to the most populous one. For example, a questionnaire was sent to the Swedish nobility on the subject of birth certificates.

From 1963–1964 EU, in collaboration with Norrbottens museum, documented the changes within mining and the societal upheaval which occurred in Svappavara as a result of LKAB’s decision to begin mining there in 1961. The study was summarised at a symposium in Stockholm in 1967 and in an article published in 1965 in Fataburen. Anna-Maja Nylén particularly emphasised that the study of radical social structural change can highlight how social groups and individuals respond to new practises and values. Studying these adaptations was of fundamental importance as a complement to the sociology of industry.

Anna-Maja Nylén also transformed how exhibitions were put together. Her biggest project was Folkdräkter (folk costumes), which opened on the ground floor of the Nordic museum in 1957. She was also in charge of updating the Dräktgalleri (costume gallery), where costumes were presented within the context of their backgrounds, materials, method of production, etc, and was completed by a display of Swedish traditional dress that spanned the length and breadth of the country. An even more thorough re-thinking of the exhibition medium was employed in 1960 for the section called Tradition och nutid (tradition and the present day), in which ancient implements and items were displayed with their modern counterparts. For example, ancient wooden milk- and beer jugs are placed next to present-day tetrapacks made of cardboard and metal beer-cans.

The transmission of knowledge and teaching also played an important role in Anna-Maja Nylén’s activities. In 1957 she was appointed docent in ethnology at Uppsala university. She was heavily involved in the Swedish handicrafts movement at both a private level and within her work at the Nordic museum. For many years she served as a member of the board partly on behalf of the Hemslöjdsförbundet för Sverige (Swedish handicrafts association) and partly on behalf of the Svenska Hemslöjdsföreningarnas Riksförbund (national federation of Swedish handicrafts’ associations). She also championed the idea that Handarbetets Vänner's (friends of handicrafts) weaving school should include training for handicrafts association staff, managers and consultants. She became an instructor at the weaving school in 1963, teaching the history of handicrafts and producing the textbook Hemslöjd, published in 1969, which provides a good introduction to the field of ethnology.

In 1965 Anna-Maja Nylén became head of a newly-established section for textiles and costumes at the Nordic museum. Over the ensuing years she ran that section’s practical museum-related work in terms of acquisitions, exhibitions, and storage. She remained in post until her retirement in 1975.

Anna-Maja Nylén was the first professionally-engaged woman to be elected into the Kungl. Gustav Adolfs Akademien för svensk folkkultur (The Royal Gustavus Adolphus Academy for Swedish Folk Culture) in 1973. Her first lecture at the academy dealt with the Bruksvallarna investigations, “En fjällby möter nutiden”, and was published in Saga och sed in 1975. In it she depicts the failings in the authorities’ understanding of the important role of coherent extended families in the particular sustenance method which hill-farming entailed. She also confirmed how successfully the extended family could adapt to diverse forms of enterprise such as the modern hotel- and tourist industries.

Anna-Maja Nylén died in Lidingö in 1976. 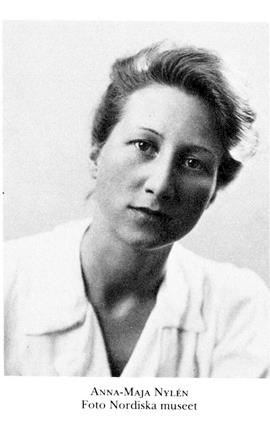