The painter, drawer and graphic artist Anna Maria Thelott was a self-sufficient and self-aware artist typical of the early modern period with regard to her education, commissions, clients and choice of genre. However, she has remained largely ignored in art history due to a lack of research.

Anna Maria Thelott, just like her three brothers, was trained by her father in the family’s art workshop. Her father, Philip Jacob Thelott senior, had emigrated from Augsburg to Uppsala at the invitation of the historian and natural scientist Olof Rudbeck senior, in order to work as an instrument maker at Uppsala University. Rudbeck also made use of Thelott’s skills as an engraver and painter to produce maps for his book Atlantica and for the illustrations in Campus Elysii (Elysian fields) with the major scientific ambition of describing all the known plants in the world. The Thelott siblings helped their father produce between seven and eight thousand woodcuts for these botanical plates. However, the great Uppsala town fire of 1702 destroyed not only the town but also Rudbeck’s entire life’s work and he subsequently died that same year. The Thelott family was forced to move and Anna Maria accompanied her old parents to Stockholm where she was forced to provide for all three of them.

Anna Maria Thelott’s multi-faceted activities as an artist comprised woodcut illustrations of German towns in Posttidningen in 1706, copper plates in prayer books and, in collaboration with her brother Philip Jacob junior, ink drawings of confiscated artillery pieces. Above all, Anna Maria Thelott is known for the rich contents of her sketchbook from 1704 to 1709, which invites an in-depth study of a partly unknown period in Swedish art history. It highlights Anna Maria Thelott’s talent as well as her inclination toward professional ambitions of a theoretical nature. The sketchbook included religious and allegorical motifs – often with women playing the central characters – which reveal the artist’s knowledge of iconography, life drawings and perspective, genres and landscapes. These studies and exercises in various techniques, probably models for future projects, largely reflect the conventional imagery of the period. There is also the odd thing that sticks out, such as a pair of aquarelle paintings depicting a female artist in full swing with her palette and her brushes. In one of these the motif is repeated, a woman with her sleeves rolled up and a pinafore over her dress as she stands in front of her easel, situated in a pastoral idyll with grazing sheep – just like the painting hanging on a ruined wall in the picture. It is signed “A.M.T. 1709”. The other portrays a female artist working in a ruined landscape, this time seated with a sketch pad on her knees, surrounded by a musician and his dog, a couple of lively figures posing as dancers and two conversing men in a doorway. Perhaps the motif is borrowed from Anna Maria Thelott’s own method of working. A similar example using a male artist is Jean Eric Rehn’s (1717-1793) undated drawing from the ruins of Uppsala castle portraying an artist lying in the grass drawing. Today it is considered unusual to see an early modern female artist producing realistic or fictional self-portraits of themselves outdoors in nature just as a male artist would have done.

Ana Maria Thelott’s sketch pad contains an early gouache portrait which has been removed from the collection and been separately conserved at Uppsala University library. This drawing contains a detailed signature: “Anna Marija ein geborene Thelotten” (Anna Maria born Thelott). This signature is considered to be the title of the drawing and the picture is catalogued as a self-portrait, although this is questionable. The portrait shows only the top half of the body of an elegant woman who is embroidering. She is holding a needle and thread, ready to sew, but she is facing a bird sitting on the back of a chair behind her with its throat engorged as though it were chirping or singing.

Whether this painting really is an idealised self-portrait or an allegorical image typical of the genre, Anna Maria Thelott appears to have understood the conventions of artistry. The possibility of interpreting the meaning of the painting and the alert bird in different ways is evidence of this. Tame caged birds were popular pets in the upper social circles of the eighteenth century and earlier. If the embroidery is considered a pastime of the privileged and the presence of the bird reflects a status symbol, this would indicate that the painting may be a so-called princess portrait. However, the motif of the girl and the bird – which in this case is free – is a long-standing tradition and offers a range of possible meanings. The composition could be interpreted as a reference to the symbolism of the day and the Christian tradition where a bird represents the soul. However, such an interpretation seems to incline toward intimacy, the familiar contact between two partners, which rather points forward toward the sentimentality of the Age of Liberty.

Anna Maria Thelott fell ill during the last great plague epidemic to strike Sweden. She died in the autumn of 1710 just 27 years old. 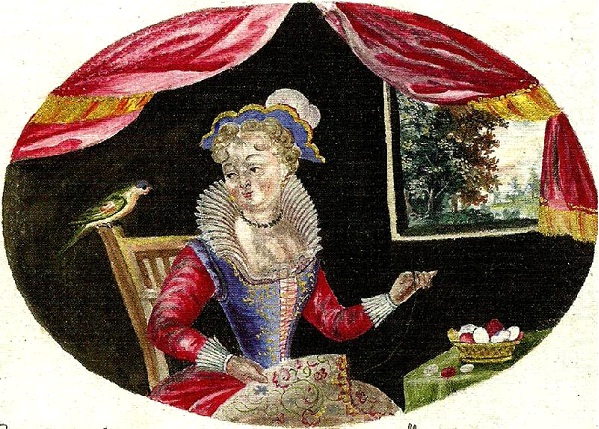