Anna Molin was born in Gävle in 1894. She was the daughter of Rudolf Röding and Elin Röding, née Bergqvist. Anna Molin grew up in Gothenburg where her father was a docent in Greek. Following a career as principal in Karlstad and in Gävle, her father had become principal of what was then Latinläroverket in Gothenburg. Anna Molin, and her twin sister Lisa, were the youngest of the family’s five girls. After attending Mathilda Hall’s school and gaining her school-leaving certificate at Sigrid Rudebeck’s high school, Anna Molin continued her education at Gothenburg college.

Whilst she was a student Anna Molin travelled abroad, visiting Italy amongst other places, in order to study sources for her future thesis. She then, in 1927, became the first woman to be awarded her doctorate from Gothenburg college. At that time Latin was the most popular subject at the college when it came to doctoral degrees. A major contributing factor to this was that a doctorate was required in order to gain work as a lecturer at any Swedish institution and Swedish high schools were crying out for assistants and lecturers in Latin. Anna Molin’s thesis, entitled Studier till Petrus de Crescentiis och hans antika källor, took the form of an edition of a small section of Pietro de’ Crescenzi’s agricultural textbook from the early 1300s. It was also an overview of the links between that work and ancient sources, particularly Varro and Palladius. Anna Molin’s tutor, Professor Vilhelm Lundström, who had published the works of the agriculturalist Columella, had suggested the subject for her doctorate. He freely shared his own research with his doctoral students. It was probably also thanks to Vilhelm Lundström that Anna Molin’s doctorate was written in the Swedish language. He had set up Föreningen för svenskhetens bevarande i utlandet (now Sverigekontakt), and, amongst other things, he was also a keen champion of using the Swedish language, particularly within academic contexts. He believed that doctoral students should write their theses in Swedish and this appears to have been adopted by the majority, despite the fact that it made it harder for colleagues abroad to access the research. The external reviewer at the doctoral defence was docent Harry Armini and the even was mentioned in the Göteborgs-Posten newspaper, where one of the comments was that the doctoral reviewers “were consternated at having to engage with the small, splendid, brave woman who was defending her life’s work against three adult men”.

Anna Molin, whilst working on her thesis, from about 1920 onwards, was also employed at Gothenburg city library, which later became the university library. She carried on working there until she retired and even continued beyond that. In 1931 she married Nils Molin, a literary historian who gained his degree that same year and who also worked at the library. They had two sons: Björn, born in 1932, and Jan, born in 1934. When the boys were small Anna Molin worked at home but she returned to her library job around 1950. Upon retiring she continued to devote her time to the women’s history archive until she was quite advanced in years. During the 1960s a new edition of her thesis was released, along with those of her husband and her son Björn Molin. This was an initiative of Elanders Boktryckeri AB, the same publisher which had printed the originals.

The home of Anna and Nils Molin was characterised by liberal values and an active opposition to Nazism. Indeed, the family’s social activism included, during the Second World War, taking Norwegian refugees into their home. Anna Molin was also active within the spheres of women’s rights and equalities issues. In 1916, at the age of 22, she had marched beside her father in a demonstration on behalf of women’s suffrage. Later on she joined Fredrika-Bremer-Förbundet.

In 1978 Anna Molin was awarded a jubilee or golden doctorate in celebration of her original degree obtained half a century earlier. Of course she was the first woman to receive this honour at Gothenburg university. On the day of her centenary in 1994 she was attended by Jan Ling, the university principal, who presented her a silver brooch bearing the university emblem. This piece of jewellery had been designed and produced by Sven-Erik Högberg, a Gothenburg silversmith. Very few copies of this brooch were ever produced and Anna Molin was only the second person to receive one (the first had been presented to the Nobel prize recipient Toni Morrison the previous year).

Anna Molin died on 6 July 1995. She is buried at Östra kyrkogården (the Eastern cemetery) in Gothenburg. 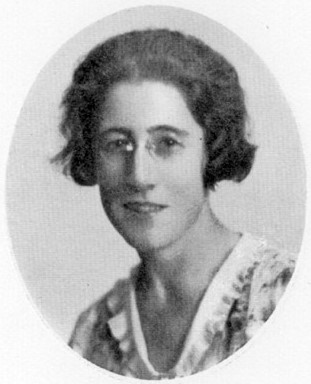