Anna Q Nilsson was an actor who can be considered to be the first Swedish film star who became internationally famous. During her career, which almost spanned 50 years, she appeared in a great number of films, almost all of which were produced in USA, during the silent film era.

Anna Quirentia Nilsson was born in 1888 in Ystad. She was the daughter of police constable Per Nilsson and his wife Anna, née Jönsson. In 1897 the family moved to Kattarp where her father became a foreman at Hasslarp sugar factory. Anna Q Nilsson helped out with rounding up the animals after school but dreamed of finding her fortune in America. She did very well at school and gained top marks when she graduated. Thanks to her scholastic diligence she gained a job as a shop assistant in Halmstad, which, at that time, was quite unusual for a young woman from a working-class family. She spent a few years saving up for a ticket to take her across the seas to the USA.

In 1905 Anna Q Nilsson emigrated from Sweden. When she arrived in New York she got work as home-help. One day she was “discovered” on the street by the famous American portrait painter James Carroll Beckwith. This led to an intense career as a model and soon Anna Q Nilsson was the highest-paid photographic model in New York. One of her employers was The Gibson Girl Look, an organisation which promoted a fashion- and women’s-ideal representing a youthful, quite feminine yet still sporty woman.

Given that Anna Q Nilsson was a famous model and a cover girl with “Nordic features” it was just a matter of time before she would be drawn into the new and massively expanding American film industry. In 1911 she made her debut in a one-act film called Molly Pitcher. This was a war film, produced by the Kalem film company, in which she performed opposite Guy Coombs. One year later he became her first husband in what would be a short-lived marriage. Between 1911 and 1913 Anna Q Nilsson appeared in 27 films for Kalem, receiving a weekly salary of 40 dollars and almost always performing opposite Coombs in the male lead. The plots of these films were surprisingly often based on the American Civil War.

In 1913 Anna Q Nilsson began to work freelance and appeared in an early version of Uncle Tom’s Cabin, produced that year by Universal Pictures. During the 1910s and the 1920s Anna Q Nilsson tirelessly continued appearing in films produced by the likes of Famous Players, Paramount, Metro, Goldwyn, Mayflower, First National, Fox, and Warner Brothers. In total she appeared in 159 silent movies and her contributions gained increasing attention in films such as The Regeneration from 1915, Seven Keys to Baldpate from 1917, Soldiers of Fortune from 1919, The Toll Gate from 1920, Adam’s Rib from 1923, Winds of Change from 1925, The Greater Glory and Miss Nobody, both from 1926. In the latter she played the part of a man and wore long trousers, reflecting the modern woman that she was.

Anna Q Nilsson gained her pilot’s licence in 1912 and later became known as “Hollywood’s daredevil” as she undertook all her own stunts. For example, during the filming of Hearts Aflame in 1922 she suffered severe burns when she drove a locomotive engine through a burning plot of land which had been drenched in 2,700 litres of gasoline.

During her first visit home to Sweden after having emigrated Anna Q Nilsson was hired by the film director Erik Arthur Petschler to play the lead role as Anna in the light-hearted 1921 film Värmlänningarna. This film became one of the biggest hits at the box-office during the 1920s and this role was to be her only performance in a Swedish film.

Towards the end of the silent movie era Anna Q Nilsson was at the peak of her film career. In 1926 she was voted the world’s most popular film star and that same year she greeted the Swedish Crown Prince Gustaf Adolf and his consort Louise Mountbatten, welcoming them to Hollywood on their round-the-world tour, giving a speech in front of 50,000 spectators at the Hollywood Bowl. In May 1928 none other than Joseph Kennedy, the father of the future US president John Fitzgerald Kennedy, attracted Anna Q Nilsson to his film studio, Film Booking Offices of America (FBO), offering her a golden contract. FBO was taken over that same year by the major film studio, RKO Pictures. Anna Q Nilsson only managed to make one film for FBO, Blockade, in 1928, which was an early talkie, before an accident brought her career to a halt. During a holiday in the Sierra Nevada mountains she fell off a horse and broke her hip so badly that following a long period of convalescence she was left with one leg shorter than the other.

Another five years passed before Anna Q Nilsson played a small part in The World Changes, by which time talking pictures had already become the norm. Anna Q Nilsson performed in another 40 films right up to 1954, usually taking minor parts and often going unmentioned in the credits. Throughout her lengthy career, however, she worked with many of the great directors, such as Cecil B DeMilne, Frank Lloyd, Raoul Walsh, Billy Wilder, George Cukor, and Vincente Minelli. She played opposite other stars including James Stewart, Katharine Hepburn, Errol Flynn, Spencer Tracy, Cary Grant, Judy Garland, and Elizabeth Taylor in films including They Died with Their Boots On from 1941, Adam’s Rib from 1949, and not least in Sunset Boulevard from 1950 in which she performed a cameo as herself along with other retired silent-era film stars such as Gloria Swanson, Buster Keaton, and Erich von Stroheim.

In 1960 Anna Q Nilsson became the first Swede to be awarded a star on the Hollywood Walk of Fame. After retiring she dedicated herself to gardening, swimming and her dogs.

Anna Q Nilsson died in 1974, aged 85, at a hospital in Sun City, California. Several TV-stations interrupted their programming in order to make a public announcement of her death. According to her last wishes her ashes were scattered into the Atlantic. 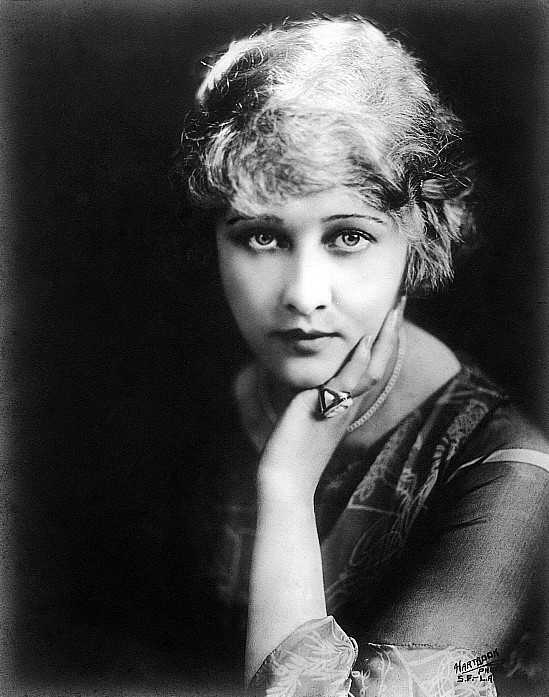