Anna Riwkin-Brick’s career as a portrait photographer began towards the end of the 1920s. She became a successful documentary photographer who was also well-known for her many photography books for children.

Anna Riwkin-Brick was born in Surazj, Belarus, in 1908. Her family moved to Sweden in 1915. Anna Riwkin-Brick resided in Swinemünde, Germany from 1919 onwards along with her mother, Frida Riwkin, and her four siblings. Upon their return to Sweden in 1922 Anna Riwkin-Brick was enrolled at the Whitlock coeducational school. She also attended the Vera Alexandrova school of dance for a few years. She spent the year of 1927 training with the court photographer Moisé Benkow, thus beginning her journey towards becoming a photographer. She opened her first studio at Bellmansgatan 20 in 1929, which she relocated to Odengatan 37 a short while later. The following year she moved a few doors down to Odengatan 43, and eventually became established at Kungsgatan 37. This street was home to several of the successful photographers of her time. In the same year that she opened her first studio she also married Daniel Brick, a translator and journalist who was also the founder of the Judisk krönika journal.

Anna Riwkin-Brick’s main focus lay in portrait- and dance photography. During the 1930s and 1940s she produced several classic portraits of contemporary young Swedish authors, including the likes of Karin Boye and Harry Martinson. Svensk Danskonst, published in 1932, was the first of several books to contain her vivid and expressive dance photography. It was published by the radical Spektrum publishing house.

By the late 1920s the Riwkin family had become prominent figures within the cultural circles of Stockholm. The Riwkin girls and boys were part of a group of young intellectuals who – along with the likes of Karin Boye, Gunnar Ekelöf, and Erik Mesterton – lay behind the Spektrum journal, which served as a platform for literary modernism, psychoanalysis, functionalism, architecture, social policies, film and music. Eugénie and Josef Riwkin were some of the most active people involved in the journal. Josef Riwkin also ran the eponymous publishing house from 1932–1935, the period when his sister’s first book was published. Anna Riwkin-Brick also photographed the Swedish authors who were associated with the journal and many of these images came to be used as illustrations in books published by Spektrum. Anna Riwkin-Brick spent the summer months of 1933 in Paris along with her friend Thora Dardel, photographing street scenes, architecture, and artists. It was at this point that, through various contacts she had made, she gained the opportunity to meet and take portrait photographs of figures within the surrealist movement, such as Jean Arp, André Breton, Salvador Dalí, Max Ernst, and Man Ray. Indeed, she took a group photograph which often appears in literature about those artists but is wrongly attributed to Max Ernst, simply because a copy of the picture was found amongst his papers.

Anna Riwkin-Brick’s contact with the editor Carl-Adam Nycop led to her being commissioned to work for the illustrated magazineSe, as well as for the Kooperativa Förbundet magazine Vi. Other commissions involved Anna Riwkin-Brick providing documentary reports for the Riksförbundet för sexuell upplysning (RFSU) (national association for sexual education) and accompanying Elise Ottesen-Jensen on her numerous lecture tours across Sweden. Anna Riwkin-Brick gradually increased her documentary photography from 1940 onwards. In 1942 she and the journalist Elly Jannes jointly published a book called Renarna visar vägen following several visits to Lappland and to the highland Sami. This pair published a second book together in 1950 called Vandrande by. Anna Riwkin-Brick also accompanied the author Ivar Lo-Johansson on his investigations of the way of life of the Romanie people in Sweden, which resulted in the 1955 book Zigenarväg, just one of four social commentary books with photographic illustrations that Ivar Lo-Johansson published.

Anna Riwkin-Brick’s greatest success came through the 19 photography books she produced for children. The first of these, Elle Kari, from 1951, told of a Sami girl whom she had met on one of her visits to Lappland. She continued documenting Elle Kari’s life experiences at school and as she became an adult. Two of Anna Riwkin-Brick’s most-liked children’s books are her 1956 Eva möter Noriko-San and Lilibet cirkusbarn, from 1960. Both of these had accompanying texts by Astrid Lindgren. In 1961 Anna Riwkin-Brick collaborated with her sister, Eugénie Söderberg who was an author in her own right, to produce their joint book Mokihana bor på Hawaii. Anna Riwkin-Brick’s children’s books often developed as a result of commissions from some magazine or other. She made use of the photographs she had taken to describe and document the lives of people from different cultural backgrounds. Thus children from places such as Ethiopia, Finland, the Netherlands, Israel, Japan, Yugoslavia, Norway, and Thailand featured in her books, many of which were translated into other languages.

Anna Riwkin-Brick’s Jewish heritage led her to travel to Israel at an early stage to document life in the newly-formed state. In 1948 she published the book Palestina, with accompanying text by her husband Daniel Brick, and some years later, in 1955, they published Israel. It was during one of her travels to Israel that she met an elderly woman who raised her thin arm in the air. This became one of her most famous images after Edward Steichen included it in his selection of images from a visit he made to Stockholm seeking material for his photographic exhibition called The Family of Man. The images were shown at the Museum of Modern Art in New York in 1955 and then toured across the globe for several years, including a 1957 exhibition at the Liljevalchs art gallery in Stockholm. The Family of Man exhibit was one of the most famous and discussed photography displays ever. Inspired by that exhibition’s theme of photography as a universal language Anna Riwkin-Brick published her book entitled Medmänniskor in 1962, which included a summary and a selection of her portraits from throughout her long career. She then, in 1966, along with fellow photographers Rolf Blomberg, Bo Dahlin, Gösta Glase, and Gustav Hansson, set up the cooperatively-run group known as Full hand, which held joint exhibitions. Anna Riwkin-Brick’s will stipulated that her entire archive and collections be donated to Moderna museet.

Anna Riwkin-Brick died in Israel in 1970. 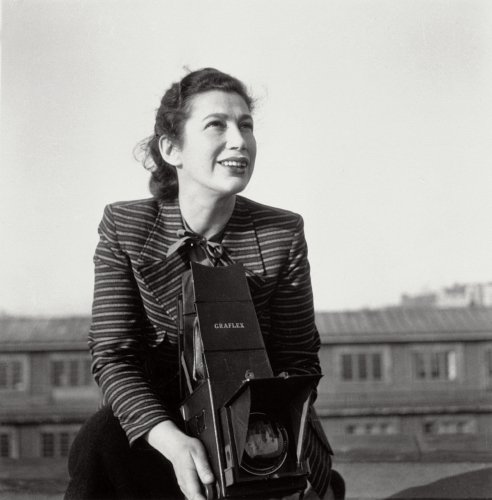