Anna Sandström was an important educator and founder of a school. Her writings on women’s policies made her very influential within the women’s movement around 1900.

Anna Sandström was born in Stockholm into a family of six children. She was four years old when her father died and her mother was forced to give her up, along with another one of her siblings, to be raised by relatives and friends. Anna Sandström was brought up by Colonel Hjalmar Hagberg and his sister Maria. Due to her foster father’s postings the family moved between various regiments and so her schooling largely involved being home-tutored. Anna Sandström did attend Statens normalskola för flickor (a state-run girls’ school), which was a preparatory school for Högre lärarinneseminariet (the advanced female teacher-training programme) in Stockholm, for two years. She then attended the three-year training course to become a girls’ school teacher at the said seminarium.

Following graduation Anna Sandström began to work as a teacher at the Åhlinska school where she was appalled. She had never imagined that a traditional girls’ school would deliver such a poor and dull curriculum. In order to keep herself motivated she continued with her own studies in history, Latin, and literature. After spending a few terms teaching at the Södermalms högre läroanstalt för flickor (advanced school for girls), which was run by her former seminarium colleague Fredrique Runquist, she was ready to move on. Her article “Gifva våra flickskolor berättigade anledningar till missnöje?”, published in Tidskrift för hemmet in 1880, proved to be her official entry into the public debate on schools. She had signed the article ‘Uffe’ in a sly reference to the well-known Norse story about Prince Uffe who, following a year of being mute and passive, suddenly began to speak and use his sword when his kingdom was threatened. However, her use of a male pseudonym was also a conscious way of disguising herself in order to be taken seriously. The article was consequently believed to have been written by some older and experienced male school-teacher and thus gained positive reception from educators of various school types. Two years later Anna Sandström again published under the name of ‘Uffe’. This time it was a more developed piece on the same theme, entitled Realism i undervisning eller Språkkunskap och bildning, from 1882. This piece gained an even greater attention, and was reviewed and discussed and – as many would later describe it – served as the catalyst to unite liberal forces within the various types of schools.

Suddenly room for manoeuvre arose on which Anna Sandström was not slow to capitalise. Within the course of a few months she had not just gathered a circle of educational reformers who discussed ‘Uffe’s’ ideas in depth, but she had also set up the journal Verdandi in which she allowed ‘Uffe’ to appear as the publisher and in which she announced that in the autumn she would open a school in her own name which would run according to “the principles put forward by Uffe”. She used Verdandi to create an entirely new forum in which ideas could be developed around the educational challenges of the day. For nearly ten years Anna Sandström, along with Sigfrid Almqvist, a school principal, and his wife Sofi Almquist, herself the founder of a school, Hjalmar Berg, a public-school teacher, his brother Fridtjuv Berg, who was the minister of education, and Nils G W Lagerstedt, the man behind Stockholms Pedagogiska bibliotek, held meetings to discuss different pedagogic ideas. The establishment of Stockholms Pedagogiska sällskap (pedagogic society) was also one of this group’s achievements.

It proved necessary for Anna Sandström to alternate between running her own school and producing educational writings. The practical experiences of running her school enabled her to develop important inspirations for her articles and textbooks. By writing about them she was able to articulate her ideas and ideals which she wanted to put into practise at her school, or as she herself expressed it in a letter to Anna Whitlock in the spring of 1892: “My pedagogy is quite simply empirical in nature, I analyse and combine the experiences I gain from my daily work and that is how I differ from the old-fashioned theoreticians”. Both in her writings and in her activities Anna Sandström sought knowledge from real life, one which grabs a hold of a person and humanises the individual. By studying history and geography students were to be given the opportunity to discover their own places in the world, and by meeting living literature they would learn to know life and themselves. With the help of a concrete approach, lucidity, and self-directed activity Anna Sandström created the type of school which she hoped would serve as a model for schools of the future. At the turn of the twentieth century she also realised her idea of setting up her own female teacher-training programme. The motto of this programme was “Ad fontes” (to the roots) where the training approach was based on a core of humanities subjects which could be combined with teaching practise and lectures in psychology, pedagogy, and methodology for those on the programme who wanted to gain formal teaching qualifications. In 1908 Anna Sandström had a large building erected at Karlavägen in central Stockholm to house her school and training-programme premises. At its height the school numbered 450 students whilst the training-programme took on 100 people. In total nearly 500 new female teachers graduated from the programme.

Anna Sandström was also an active promoter of women’s issues. It was hardly coincidental that her first ‘Uffe’ article was published in Sophie Adlersparre’s Tidskrift för hemmet and that four years later she was a member of the inner circle which founded Fredrika-Bremer-Förbundet (association). During the 1890s she wrote a number of attention-grabbing articles in that association’s organ, Dagny. One of them, “Han och Hon: Några jämförelser mellan mannens och kvinnans själs-lif”, from 1890, entered into the poisonous debate on August Strindberg’s Giftas short stories. However, she engendered the greatest attention with her three polemical articles in opposition to Ellen Key: “Kvinnoarbete och kvinnolycka: med anledning af ‘Missbrukad kvinnokraft’ af Ellen Key” and “Kvinnoarbete och kvinnolycka: ännu några synpunkter”, both from 1896, and “Modern romantik och etik”, from 1898. These well-formulated contributions gave Anna Sandström a prominent position within the Swedish women’s movement. Her articles formed a powerful defence of men’s and women’s rights to full personal development based on individual aptitude and ambitions. According to Anna Sandström, Ellen Key’s reduction of men and women into gendered beings and, further, creation of seductive images of men as the defenders of reason whilst women were the defenders of emotion, was to denigrate both culture and human potential.

During the ensuing decades Anna Sandström somewhat modified her earlier non-gendered views. As the director of a girls’ school with a women’s teacher-training programme she was mainly involved in issues which related to the reforms and values of girls’ schools. Anna Sandström, who had never had the opportunity to gain her school-leaving certificate herself and thus go on to university, believed that young female academics’ demands on ‘masculine’ careers risked becoming a sort of dogma that applied to all women. Her article entitled “Medborgerlig likställighet mellan man och kvinna”, published in Verdandi in 1921, summarised her views on the women’s issues of the day and their complexities.

Many of the pedagogic ideas which were tested within her private girls’ school eventually became influential within other types of school too, for example through the 1919 teaching plan introduced at municipal public schools and through the 1905 and 1928 school acts pertaining to state-run schools. Anna Sandström was able to personally enjoy both recognition for and the dismissal of her efforts. She was awarded the Illis quorum medal in 1904. Twenty-five years later, however, when girls’ schools had been municipalised, her request for a pension was rejected because it was decided that her employment had occurred within what, at the time, had been private school enterprise.

Anna Sandström died in 1931. She is buried at the Norra cemetery in Solna. 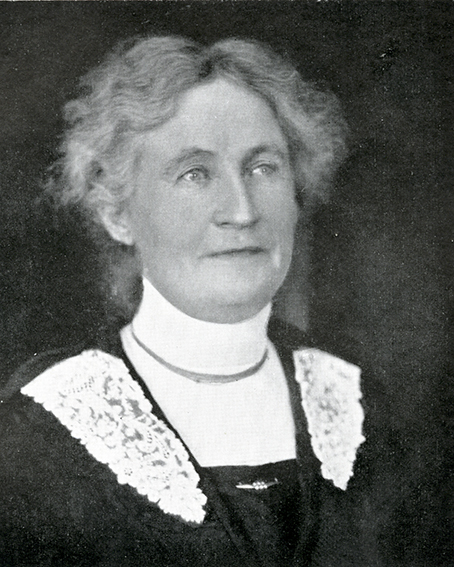