Anna Sofia Sevelin was one of the leading singers of the Stockholm opera during the nineteenth century. She also did a little bit of acting.

Anna Sofia Sevelin, whose original surname was Tunberg, was born at the Helgesta sexton’s farm in Sörmland. She was the daughter of Olof Tunberg, the sexton, and his wife Gustava. Anna Sofia Sevelin was accepted at Kungliga teatern (royal theatre) drama school when she was just sixteen years old. Whilst a student she gained attention for her deep and fulsome alto singing voice and was taken into the care of the school’s two singing instructors, choirmaster Johan Fredrik Wikström and the German bass Carl August Stieler.

In 1812 Anna Sofia Sevelin, still using the name of Tunberg, performed as the Queen of the Night in Mozart’s The Magic Flute in a production which apparently ran for 115 performances. The next year she appeared as Donna Anna in Mozart’s Don Giovanni, of which there were 136 performances. In between these two productions, in March 1813, Anna Sofia Sevelin married Per Erik Sevelin, a dancer who eventually became the ensemble’s unsurpassed comedic actor. In the autumn of the same year their only child, a daughter called Sofia Amalia, was born.

Anna Sofia Sevelin spent the next ten years performing under her married name. She sang the part of Agata in Der Freischütz in 1823, which ran for 110 performances, the countess in Mozart’s The Marriage of Figaro in 1825, of which there were 274 performances, Rosina in Rossini’s The Barber of Seville, which she performed on 339 occasions. These parts were all presumably quite unsuited to her apparently deep voice. Whether for reasons of ambition or whether it was due to the theatre management’s lack of understanding, the inevitable result was that Anna Sofia Sevelin’s voice changed. Towards the end she was only applauded by her older admirers. Further, she was considered to be a poor actor as apparently even in operas she only sang “as though she were performing a concert”. At the peak of her singing career Anna Sofia Sevelin was elected into the Royal Swedish Academy of Music as an associate member, gaining seat number seven on 4 June 1817. Her salary was reduced in 1833, leading her to leave the opera in protest. It was not until 1837, however, that she was formally relieved from her post and awarded a pension. At the same time she appointed as singer to the royal court.

Nils Arfvidsson was a writer and director who had more respect than admiration for Anna Sofia Sevelin. His short biographical essay on her was posthumously published in 1885 in a small pamphlet entitled Teaterbilder från fordom. Arfvidsson’s text, which had apparently been written as early as 1858, describes Anna Sofia Sevelin as “the primadonna of the singing world” during the 1820s. He further stated that “her voice was that of a well-trained high and strong soprano – she had for a long time been our only coloratura singer”. He also particularly noted that it was she “who introduced modern Italian music here; long before Rossini’s operas were produced here – she was the only one, in her day, who could perform the leading roles”.

When this pamphlet was published Anna Sofia Sevelin had already been a widow for seven years and was living at Skepparegatan 10 in Stockholm, along with her unmarried daughter, from whom she perhaps received some income. 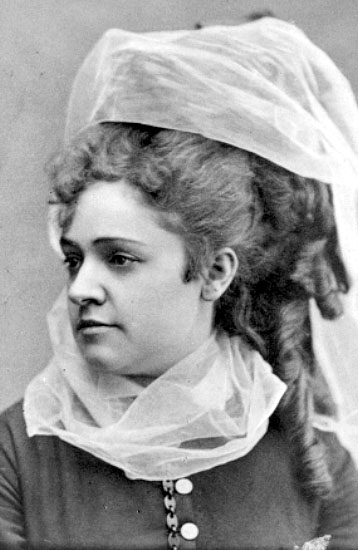