Queen of Sweden and Poland

Archduchess Anna was Queen of Poland and Sweden.

Queen Anna was born in 1573 in Graz, where she also grew up with her fourteen siblings. Her parents were Archduke Charles II of Inner Austria and Maria of Bavaria. She was named Anna after her maternal grandmother, Duchess Anna of Bavaria, and her paternal grandmother, Anna of Hungary, the consort of Emperor Ferdinand I. Charles’s older brother was Maximilian II, the Holy Roman Emperor of the House of Habsburg as were two of Charles’s nephews (Rudolf II and Mattias). Both Rudolf II and Mattias died childless, so the Habsburg crown passed therefore to Ferdinand II, Charles’s and Maria’s eldest son and Anna’s brother.

Queen Anna had a strict Catholic upbringing in a convent and her knowledge of Latin was unusually extensive. Her mother Maria had received an excellent education along with her brothers and she saw to it that her children also did. Since the Habsburg family were clever at making political marriages, suitable candidates were discussed for Queen Anna. In a document from 1585, there is a first suggestion as to a husband, naming Sigismund as well as a description of Sweden, an exotic country from a central European perspective. The family in Bavaria suggested Henry II, Duke of Lorraine as a possible candidate for marriage. A connection with Lorraine would have been advantageous considering the Habsburg family’s old feud against France. Queen Anna’s mother Maria would have preferred the Lorraine project, but when it failed she wanted to continue with Sweden.

When Charles died in 1590, none of his eight daughters was yet betrothed and he wrote in his will that they were only to be married to aristocratic, Catholic persons. The Swedish project was on the cards again in 1589, probably because the Emperor wanted to strengthen his position in Poland. Sigismund responded positively to the idea of marrying one of the princesses in Graz, but he did not reveal which one he meant. In mid-March 1591, the bridal negotiator Jerzy Radziwiłł arrived in Graz and asked Maria for the hand of one of her daughters, but he did not specify which. In the end, Sigismund decided in favour of the eldest daughter Anna. However, she thought that he had been rather too slow in deciding. In addition, she expressed her distrust of Lutheran Sweden. During the summer of 1591, heavy pressure was brought to bear on the young Archduchess, who in the end gave in.

During the spring of 1592, all the negotiations were completed concerning the marriage and on 5 May 1592, the marriage was performed with a stand-in for Sigismund in Vienna. Afterwards, Queen Anna travelled to Poland. Maria chose to accompany her daughter. The entourage consisted of 328 people and 558 horses. When they approached Kraków, grand preparations had been made. The castle was newly painted and neighbouring streets and houses had been cleaned. Five Turkish tents had been set up outside the town to welcome the bride and in one of them waited Sigismund. When Anna approached, he sent a beautifully decorated bridal coach to meet her. Between Sigismund’s and Anna’s tents, a golden canopy had been erected. The bridal couple met under it for the first time. The journey continued on into Kraków. Sigismund was escorted by imperial officers. Queen Anna and her mother had taken their places in the bridal coach. The bridal couple was welcomed by altogether five bridal arches.

The marriage and coronation were held on 31 May in the cathedral in Kraków. The day after, Queen Anna renounced all her claims to inheritance in Austria, which was also confirmed by Sigismund. Festivities taking several days followed. Great expectations rested on the young bride’s shoulders. The Habsburg family hoped that the bonds of friendship with the Polish royal house would be strengthened, and that a common alliance against the Ottoman Empire would thus be initiated. Hopes were also that the Queen with her strict Catholic upbringing would help to bring the Lutheran country of Sweden back to the Catholic religion. The bridal couple spent their honeymoon at Lobshof near Kraków. Afterwards, during their journey to Warsaw where parliament was to convene, Anna had the opportunity of seeing parts of her new homeland. Descriptions bear witness to the journey’s passing through a poor country. Queen Anna continued her pious life in Poland. She fed the poor and sent money to her confessor to help with hospitals and housing for the poor.

When Anna’s father-in-law, Johan III, died in November 1592, Sigismund was firmly set on travelling to Sweden and joining in the government of his inherited kingdom. Queen Anna was equally firmly set on accompanying her husband. She was however pregnant and the journey had to wait. In the spring of 1593 she bore the couple’s first child, a daughter who was given the name Anna Maria. In the summer, when the royal couple left for Sweden, the little newborn daughter remained in Poland.

During her stay in Sweden, Queen Anna was politically important as Sigismund’s confidante. Because of her strong Catholic faith, the question of religion soon became a vital issue. There was no Catholic church in the whole of Sweden and the queen attended her morning mass in the former court chapel. After his father’s death, Sigismund planned on demanding to use the great court church. Besides, the coronation ceremony itself was a great impediment. Sigismund wanted to employ a Catholic priest in Uppsala, which many people, with Duke Karl in the lead, opposed. At Drottningholm Castle, Sigismund had his mother’s chapel put in order and entrusted it to a Jesuit. Queen Anna kept to her habit of feeding twelve poor people every week, which awoke wonderment in Sweden.

The clergy in Sweden were worried that the young queen’s popularity would increase. Duke Karl did his best to blacken his nephew’s name. There was unrest in the country and in this spirit, the royal couple travelled to Uppsala to bury Johan III. There were also differences of opinion concerning the coronation procedure. Sigismund did not want to be crowned and anointed by a protestant bishop, but he was compelled to back down in the face of protestant demands. That dismayed Queen Anna and the coronation felt like an empty ceremony to her, without religious content.

The coronation took place on 19 February 1594 in Uppsala. During it, Sigismund refused to take off his gloves when he was anointed. After him, Queen Anna was crowned. She had already decided in advance that she did not want to be anointed. Finally, a Te Deum was sung in Swedish. The coronation took over four hours and the queen, who was distressed by pregnancy problems, found no joy in it. At the banquet afterwards, the king and queen opened the dancing, and afterwards they retired to their suite. Ten days after the coronation in Uppsala, the royal couple returned to Stockholm. The unrest in Sweden had not calmed down and many were distrustful of their new king. Therefore it was impossible for Queen Anna and Sigismund to leave Sweden immediately, also since plans for government in the king’s absence still had to be made.

Sigismund made his uncle, Duke Karl, his regent to govern with the Privy Council, but forbade him to call parliament together. The royal couple had to postpone their journey home on account of Queen Anna’s pregnancy. Her delivery was calculated for the beginning of May and before that she was unable to travel. The delivery went well, but the child, her second daughter was weak. She was given an emergency baptism and died when barely one month old. Many were surprised that the queen did not seem to grieve for her child. It was explained that what kept her going was her total submission to God. Queen Anna was happy that her daughter had been baptised so that she did not die a heathen. At the same time, however, she saw her daughter’s death as a punishment since she had not been baptised a Catholic. She had her dead child painted and herself managed her embalming and dress. The girl was laid in a tin coffin and transported to Poland, where she was buried in Kraków. During her stay in Sweden, Queen Anna had longed for Poland since she could not feel truly content in a protestant country. She was thus glad when they were once again in Poland, in August. An heir to the throne did not appear immediately, but after a little more time, in 1595, Anna gave birth to a son, who was named Vladislaus (Vladislav).

Queen Anna was deeply religious, and the Catholic faith was central in her life. She spent a lot of time in prayer, was generous with gifts that she communicated via her confessor to for example hospitals, churches and the poor. She has been described as calm, friendly and not at all vain. Her marriage with Sigismund, despite the fact that it was arranged, was happy and she was often his counsellor in political matters, even though she kept in the background.

In 1597, she lost yet another daughter, who did not even reach the age of one. During the winter of 1598, a severe influenza-like illness raged, and Queen Anna was infected. Her condition worsened radically and in February 1598 she died. After her death, the child with which she was pregnant was taken out of her body, a boy who showed weak signs of life. However, he died soon after his emergency baptism, when he was given the name Christoph. Sigismund grieved deeply over his wife and refused to wear shiny clothes for three years. When it was time to find a new wife, he bade his mother-in-law Maria for advice, and his second wife was Konstanze, Anna’s younger sister. 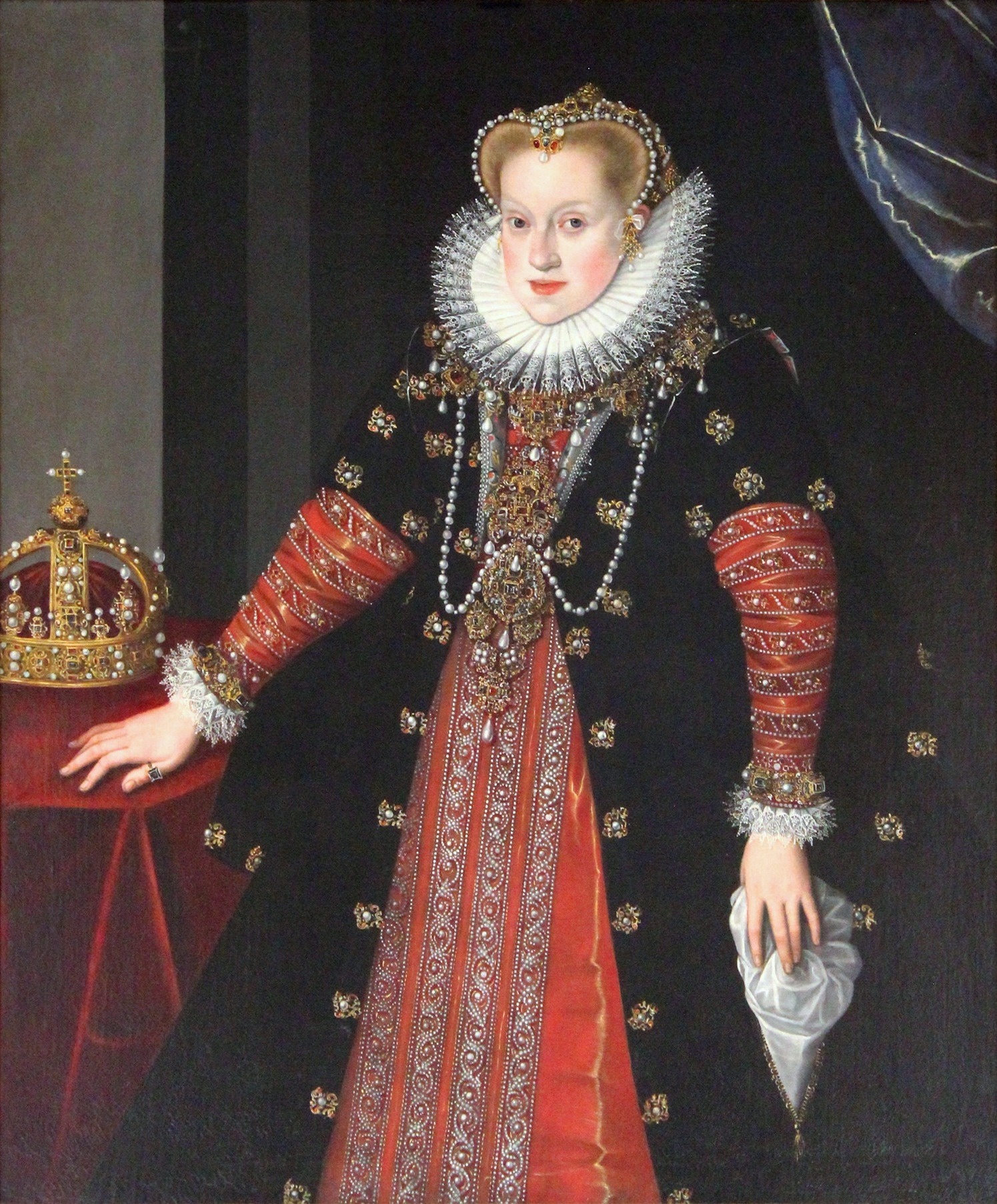