Astri Andersen was a pianist, active around the turn of the twentieth century. She can be seen as representative of many important female musicians who died young without leaving the slightest trace of their artistry and whose existence is only retained in their names.

Astri Andrea Kristina Andersen was born in Stockholm in 1876. Her father was the prominent Norwegian cellist, Anton Jürgen Andersen. In the same year that she was born her father was appointed as a teacher at the conservatoire of the Royal Swedish Academy of Music (now the Royal College of Music), following a five-year post with the Royal Swedish Orchestra. Astri Andersen was thus brought up in a privileged musical environment. When she was only eight years old, she began taking piano lessons with Richard Andersson, who also taught her the basics of harmonising. Four years later she became a pupil at the conservatoire, where Aron Bergenson and Conrad Nordqvist became responsible for teaching her harmonisation.

Her piano teacher at the conservatoire was Emil Sjögren, who was an assistant of Richard Andersson. Astri Andersen graduated from the conservatoire in 1894 and — along with the celebrated young French violinist Henry Marteau — was invited to undertake a concert tour in January 1895, to places including Sundsvall, Gävle, and Uppsala, ending up in Stockholm. She then made her debut as a soloist on 11 May 1895, performing Chopin’s concerto in e-minor. She gave further performances in Sweden, Norway, Denmark, Finland, and Germany. On 5 March 1896 she gave a piano recital in Stockholm for which she won general admiration for her mature musical ability.

Having one’s biography included in Svenskt porträttgalleri, a biographical encyclopaedia, served as criterion for social estimation at that time. The editors of volume eleven decided, on 10 June 1897, to include Astri Andersen among composers and stage performers, despite her tender age of 21.

During the 1898—1899 season Astri Andersen took a break from performing, in order to deepen her piano playing skills with the pianists Moritz Moszkowski and Ernst Jedlicka in Berlin, where she also gave a concert in February 1989. However, her return to a full performing career seems to have been slightly less successful. She formed a piano trio with her father and the violinist Larz Zetterquist. On 20 February they performed Chopin’s piano trio in g-minor op.8, after which they played a few piano recitals in Härnösand and in Uppsala. On 19 February 1903 the trio performed Chopin’s op.8 again, but after that Astri Andersen began to focus on teaching in Stockholm, Malmö and Lund. She married fellow teacher Efraim Strömberg in Malmö on 12 June 1907.

Astri Andersen died of unknown causes in April 1911 whilst on a visit to Nybro. She is buried at the Northern Cemetery in Lund. 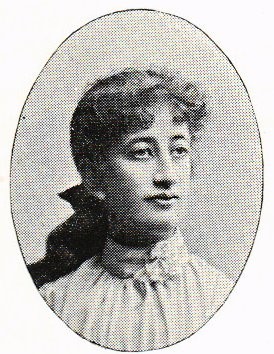