Astrid Lindgren was a Swedish children’s book author who fundamentally revitalised the genre. She is world famous for her books about Pippi Långstrump (Pippi Longstocking), Emil i Lönneberga, and Ronja Rövardotter (Ronia the robber’s daughter). She is currently (2017) the most translated Swedish author across all genres, in 100 registered languages.

Astrid Lindgren was born in 1907. She grew up in Näs, near Vimmerby. She was the second child in a family of four siblings. Her father farmed a parsonage leasehold and later also worked for the municipality. Her mother had married young and had no professional qualifications, but she had intended to become a teacher. Astrid Lindgren portrayed her parents’ love-story in her 1975 book Samuel August från Sevedstorp och Hanna i Hult. Her childhood home benefited from a sense of safety and freedom, playfulness and hard work. Nature was important to Astrid Lindgren and several of her essays on writing and literature are rooted in her strong connection to the power of nature, such as “Finns det olika träd?”. Astrid Lindgren’s childhood has been described as easy-going but this changed during her gloomier and melancholy youth. She no longer had the freedom of playtime and once she had completed her schooling she began to do unpaid work at Vimmerby Tidning, where she reported and wrote travelogues. One of these describes a visit with Ellen Key at Strand in 1925.

In the spring of 1926 Astrid Lindgren fell pregnant, which was a bit of a scandal at that time in the small town of Vimmerby. The child’s father was the owner and chief-editor of Vimmerby Tidning. Astrid Lindgren then had to move to Stockholm where she undertook office work and later trained to become a secretary for the Bar-Lock Institute. Her son, Lars, was handed over to foster parents in Denmark and four years would pass before mother and child could be reunited and build a home together. Astrid Lindgren was employed by Kungliga Automobil Klubben (KAK) and one of her jobs was to edit the KAK travel guide for Sweden. In 1931 she married Sture Lindgren. Three years later their daughter Karin was born and in 1941 the family settled in the apartment on Dalagatan 46 in Stockholm where she saw out her days.

Although Astrid Lindgren was a housewife she would send stories and fairy-tales she had written to newspapers and journals such as Landsbygdens Jul and Stockholms-Tidningen. During the period of the Second World War she was employed as an inspector for the intelligence service within the letter-censoring department, a job which she herself termed a “squalid job”. She glued contemporary article clippings into her diaries from that time and wrote commentaries regarding her experiences and what she had read. Astrid Lindgren’s Krigsdagböcker 1939-1945 was published in 2015.

Astrid Lindgren’s desire to tell stories and write developed at an early age. She had an essay published in Vimmerby Tidning when she was 13 years old. Her story-writing led, during the 1930s, to bigger projects and following the debut of her 1944 book for girls called Britt-Marie lättar sitt hjärta – which won 2nd prize in a competition – the stories didn’t stop coming. Astrid Lindgren had become a skilled stenographer and she used to stenograph her scripts and then write them out on a type-writer.

Astrid Lindgren’s major breakthrough as an author came in 1945 through her literary bombshell entitled Pippi Långstrump (Pippi Longstocking). Elsa Beskow had been the doyenne of Swedish children’s literature for the last half-century until then. After the publication of Pippi Långstrump Astrid Lindgren took her place. This first book was followed by Pippi Långstrump går ombord in 1946 and Pippi Långstrump i Söderhavet in 1948. Around this time she also released two books on ‘Barnen i Bullerbyn’ (the Bullerby children), the first in the Kalle Blomkvist mystery series, Mästerdetektiven Blomkvist, from 1946, and the fairy-tale collection called Nils Karlsson Pyssling, from 1949. Further, Kerstin och jag, an often overlooked girls’ book which is the dream representative of the welfare state given its sacred view of agriculture, work, and love as experienced in the Swedish countryside, was published the same year as Pippi Långstrump. Kerstin och jag is diametrically opposed to the libertine lifestyle championed in Pippi Långstrump’s wild garden.

The Pippi Långstrump trilogy challenged the outdated view of the child as mouldable material. Pippi questions society and its norms both in her language and experiences. Certain conservative circles found it hard to swallow the free lifestyle she espoused and it gave rise to discussions which continued right into the 2000s. Astrid Lindgren herself referenced Bertrand Russel and his ideas on children’s instinctive forces when she sent her manuscript to Albert Bonniers Förlag (publishers) in 1944: “a child’s primary instinctive force is the desire to grow up, or perhaps more correctly the desire for power, and the ordinary child clings onto notions of a desire for power in their imagination.” Astrid Lindgren’s manuscript was initially rejected and Pippi Långstrump was published in a somewhat reworked fashion by Rabén & Sjögren Bokförlag (publishers) the following year. The Pippi Långstrump stories also enjoyed widespread popularity through the medium of film, TV-series, and as stage dramatisations.

The first stageplay of Pippi Långstrump was performed in 1948. There were also picture-books and series about Pippi Långstrump. The books were illustrated by the Danish-born Ingrid Vang Nyman, who also did the illustrations for the Bullerby books. Ilon Wikland took over as Astrid Lindgren’s chief illustrator, but she also had Kerstin Thorvall (Kalle Blomkvist och Rasmus) and Björn Berg (the Emil books) collaborating with her. Astrid Lindgren also wrote the texts for picture-books, including a series which was produced with the photographer Anna Riwkin-Brick about children from various different countries.

Astrid Lindgren’s writings extend across a range of story-types and incorporate a variety of character types from the outset. The trilogy about Kati the young office-worker, introduced in the 1950 book Kati i Amerika, was initially produced as a serial for Damernas Värld and was originally aimed at an adult audience. Kalle Blomkvist’s mystery adventures do not shy away from murder and the thriller-like events resemble stories from the Cold War. Astrid Lindgren turned the perspective of the established children’s book on its head and transformed it. Her trademark was indeed to jump between genres and develope them both psychologically and artistically. Her stylised 1954 tale called Mio, min Mio takes the form of an epic tale about an unhappy adopted child and his search for a father. The four tales which comprise Sunnanäng, from 1959, include harsh developments in a poverty-struck Sweden which abandons its children. However, the 1947–1952 Bullerby books offer the direct opposite: a stable community of children within an idyllic farming environment.

The ability to turn things completely upside down and engender expressions of a new aesthetic are typical of Astrid Lindgren’s writing. She emerges as a comical teller of folklore in the books about ‘Emil i Lönneberga’ which represent a look backwards at her own childhood. A feminine version of Emil appears in Madicken from 1960 and in Madicken och Junibackens Pims from 1976. In Lillebror och Karlsson på taket from 1955 Astrid Lindgren offers a particular type of humour. Karlsson became particularly popular in Russia, albeit in a reworked form. Karlsson, who is endowed with a propeller, embodies a megalomaniacal ego who simultaneously represents modern mankind’s complicated relationship to the machine. The main themes of Astrid Lindgren’s final novel, Ronja Rövardotter, from 1981, are love and peace. It shows how Astrid Lindgren is able to bring older story-forms such as the robber-novel to life but it also serves as a testament to the permanent and unwavering belief in children’s power to change structures and to create a new future.

Astrid Lindgren’s books contain various levels of complexity but all of them are carried by a tension which immediately speaks to the reader. She has portrayed lonely, abandoned, and unwanted children and their attempts to control their hard-to-understand realities with a particular vividness. Dreams and imagination are transformed into creative forces, as in the 1949 poetic saga “I skymningslandet” about a boy suffering from polio who arises from his sickbed and flies out across Stockholm. The figure of the ill boy is also the basis for Bröderna Lejonhjärta (Brothers Lionheart), from 1973, which is perhaps Astrid Lindgren’s premier novel. It is as much an adventure story and revolutionary novel as it is an allegory of the small person’s strength in the face of a dictator’s power and evil’s machinations. The most decisive element of this novel about love, loyalty, and faith, is that it was possible to do the very things one didn’t dare to do. As Jonatan says to his younger brother Skorpan: “Otherwise one is not a person, one is just a wee turd”.

Astrid Lindgren’s stories have influenced Swedish children’s films and children’s drama for many years. There are about 50 films based on her works. In 2016 the play Karlsson på taket was performed in both Gothenburg and Stockholm with Krister Henriksson in the lead role. The 1960s TV-series Vi på Saltkråkan about a Stockholm-based family who move out into the archipelago during the summer resounded directly with the public. It had been written as a TV-script and was only released in book format in 1964 after it had been aired. The modern series was produced in colour before colour-TV was the norm and the music had been especially written by Ulf Björlin. Later more films about Saltkråkan were produced.

As an author and an individual Astrid Lindgren was enormously successful within society’s structures and culture. Her stories are read and influence people’s lives across the globe and several have now become classics in their own rights. As an editor and head of children’s and youth literature at Rabén & Sjögren publishers from 1946–1970 she also had major influence in the development of Swedish children’s and youth literature. She has influenced policy and was very active in the animal rights and peace movements.

Many of Astrid Lindgren’s stories have transformed the Swedish language through words and expressions which are related to particular characters, such as Tjorven’s constant refrain of “Vet du vad?” (d’ya know what?) from Vi på Saltkråkan. The expression of exasperation, beloved by children, “Fy bubblan!” (similar to for Pete’s sake) from the radio- and film-adaptations of Kalle Blomkvist och Rasmus became a so-called national plague in the early 1950s whilst the eternal querying by the ‘rumpnissarna’ as to “Voffor gör di på detta viset?” (why are they doing it like that?) in Ronja Rövardotter is still, and probably will always be, in use. 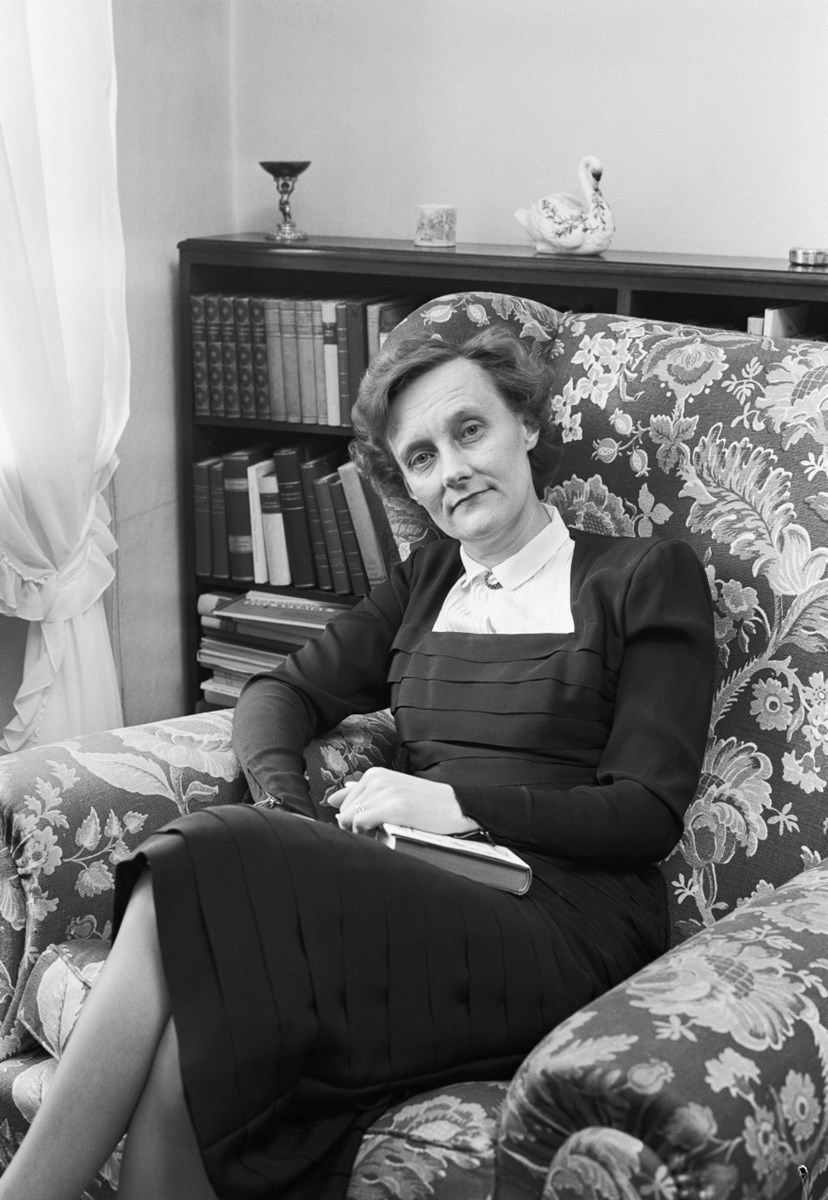