Mary Johnson was an actor. She was one of the first Swedish actors to become an international film star.

Mary Johnson was born Astrid Maria Carlsson in Eskilstuna in 1896. She was the daughter of Hilma Maria and Carl Oskar Carlsson, a cobbler and a locksmith. Like many actors during the late nineteenth century Mary Johnson learned her acting skills by joining a travelling theatre company. In her case the chosen theatre company was Karin Swanström’s troupe. Mary Johnson made her debut with the troupe in 1913, appearing in a dramatization of Emilie Flygare-Carlén’s Rosen på Tistelön. She also met her first husband, Karl Johnson, through the Swanström troupe. Karl Johnson later became one of the most successful theatre directors and a writer of revue-shows in Sweden, working under the name of Karl Gerhard.

In 1913 Mary Johnson made her silver-screen debut in Mauritz Stiller’s incomplete film Mannekängen. The next year the Johnson couple were both hired by Hjalmar Selander at Nya Teatern in Gothenburg. Mary Johnson became that theatre ensemble’s primadonna. One of her biggest roles, which became somewhat of a trademark for her, was in Dunungen in 1915. At this point she was also working for the Hasselblad film company, which had emerged as a rival company to the Stockholm-based Svenska Bio, then the dominant force within the Swedish film market. Mary Johnson appeared in Ministerpresidenten in 1916, Mysteriet natten till den 25:e, from 1917, which was banned by the censors, Mellan liv och död, from 1917, and Fyrvaktarens dotter, from 1918. The majority of these films were directed by Hasselblad’s star director Georg af Klercker.

In 1917 Mary Johnson toured with Skådebanan and from 1917—1918 season onwards she performed at that ensemble’s permanent home stage at Folkets Hus theatre in Stockholm. Karl Gerhard broke away from Skådebanan and subsequently set up his own touring enterprise. Mary Johnson and Rickard Lund were his star performers.

In 1918 Hasselblad merged with another very ambitious company, named Skandia, and now Mary Johnson made her audience breakthrough in the film Mästerkatten i stövlar, in 1918. The next year the company merged with Svensk Bio and thus became the dominant company in Sweden, namely Svensk Filmindustri. Mary Johnson performed what was perhaps her most famous Swedish film role, playing Elsalill in Mauritz Stiller’s film adaptation of Selma Lagerlöf’s Sir Arne’s Treasure in 1919.

At this point Mary Johnson divorced Karl Gerhard and subsequently married the Norwegian Einar Rød. Her acting activities thus moved to Norway. This included a tour of the country in 1922 and at Chat Noir in Oslo from 1922—1923. After this she was hired by German film companies, first by Trianon which rapidly folded, and then by Rex-Film which gave her a major role in Das Haus der Lüge (known as Vildanden in Swedish) in 1926.

She now began to develop as a more versatile actor, suited to both comedies and tragedies. Filming in Germany also led to her becoming one of Sweden’s first international film stars. It was also in Germany that she met her third husband, the actor Rudolf Klein-Rogge. Following the relatively busy film career she had enjoyed during the 1920s Mary Johnson almost entirely vanished from the film world in the early 1930s.

Mary Johnson and Rudolf Klein-Rogge were heavily impacted by the Second World War during which they lost practically all of their belongings. Their home in Berlin was destroyed by bombs and their financial assets were frozen in a bank in the East zone. The one thing they owned which survived the war was a summer cottage near Graz in Austria. They settled there after the war ended. When Mary Johnson was widowed she moved back to Sweden where she spent her final years in obscurity.

Mary Johnson appears to have been reluctant to engage with publicity and there is little written about her. She was considered to be one of the most beautiful actors within the Swedish film industry, or as Filmjournalen described her: “our own little film ingénue”. Zarah Leander, in her own memoires, described the almost dream-like creature she saw while watching her near the stage, calling her “the most angel-like of all, Mary Johnson”. Without doubt there was a somewhat androgynous quality about her and it has been claimed that she got as much fanmail from women as she did from male cinema-goers.

Mary Johnson died just a few days before her 79th birthday, in Stockholm in 1975. She is buried at the Woodland Cemetery in Stockholm. 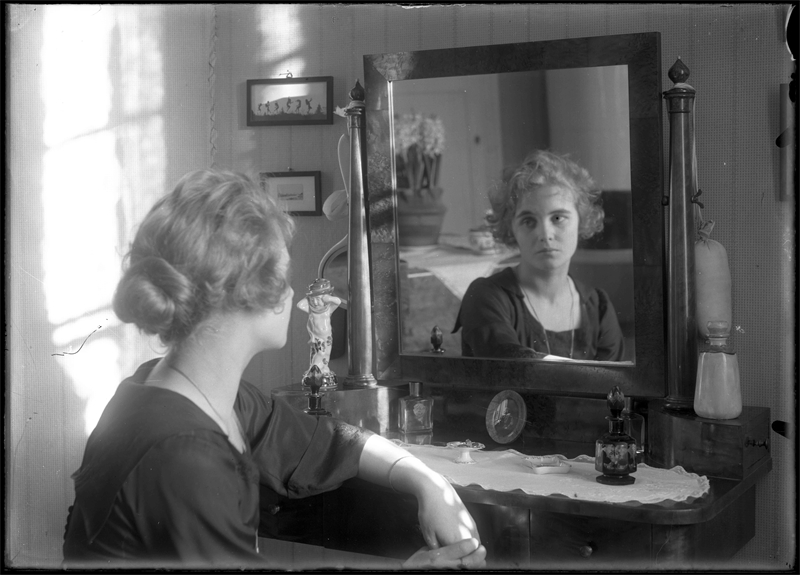