Augusta Braunerhjelm was a dramatist, an author and a writer who was active during the final decades of the 19th century.

Augusta Braunerhjelm was born at Lundås in Edebo parish in Roslagen. She grew up there with her father, chamberlain Samuel August Braunerhielm, and her mother, Countess Sofia Taube. Each of her three brothers joined the military whilst her sister, Sofia Charlotta, married Baron Bror Abraham Leijonhufvud, director of postal communications, in Stockholm in 1866. Augusta Braunerhjelm remained unmarried throughout her life. Relatively little is known of her life and there does not appear to be a known archive of material related to her. She is said to have spent time in Italy for health reasons during the winter of 1877 to 1881. She visited the World’s Fair in Chicago and reported on for instance its opening to Sydsvenska Dagbladet.

Augusta Braunerhjelm made her debut as an author in 1870 when her comedy Kusinerna was performed at Kungliga Dramatiska Teatern (Royal Dramatic Theatre) in Stockholm. The theatre critic Erik Thyselius, using the signature Ths., commented in 1908, in an article entitled “Från Dramatens gamla dagar” in Svenska Dagbladet, that Augusta Braunerhjelm belonged to a group of three women who were almost completely forgotten but who deserved “to be somewhat remembered” for their dramatic efforts. Augusta Braunerhjelm’s literary output comprises five plays, two collections of short stories, one novel, and one collection of fairy tales. Further to that she also contributed to various literary journals and calendars during the late 19th century. She also produced journalism.

Augusta Braunerhjelm’s writings can be summed up in three genres and periods: her plays from 1870 onwards, her prose from 1883 onwards, and her journalism later. Her works were performed at Kungliga Dramatiska Teatern and at Nya teatern in Stockholm. Kusinerna was staged at Dramaten on 19 February 1870 and although it did not receive critical acclaim the audiences loved it and it played for more than 60 performances. Two further comedies by her were subsequently staged, namely Hvem at Dramaten in 1877 and Bror Görans hustru at Nya teatern in 1884, although neither of these enjoyed the same success as her first comedy. Two further plays written by her are known of, both of which are historically themed tragedies: Blodshämnden, 1879, which was apparently published as a book but as far as is known was never performed, and finally Kåre, which was performed in April 1880 at Dramaten, having been acclaimed by the Swedish Academy. However, Erik af Edholm, then head of theatre, described this play as “insufferably boring”.

In 1883 Augusta Braunerhjelm published two collections of short stories: Studier efter naturen: teckningar från Italien, and Nya teckningar från Italien. Although the various lives and situations described in the books all occurred in Italy, she raised contemporary issues in them and with her short story entitled “Bikten” the author positions herself within the sphere of modern Nordic breakthrough writers. Augusta Braunerhjelm portrays here how life options for women are limited. She continued to produce work in book format, producing a collection of fairy tales entitled I den tiden: sagor, 1898, and the novel I unga dagar, 1900. After that she ceased publishing books. Some of her texts were published in literary calendars, such as Svensk Kalender, 1883, in which her polemical poem called “Gamle gudar” garnered a lot of attention.

Augusta Braunerhjelm died in 1929. The death records for Edebo parish list the cause of death as “ålderdomssvaghet” (literally weakness due to age). 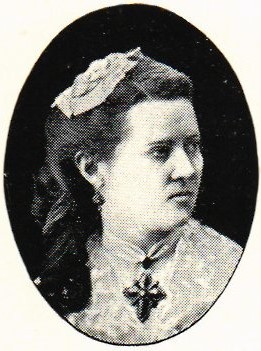