Augusta Wästfelt was an author, a civil defence activist, and an opponent of women’s suffrage. She set up Svenska kvinnoföreningen för fosterlandets försvar (Swedish women’s association for the defence of the fatherland), which became a high-profile organisation with a large membership in its time.

Augusta Wästfelt was born in 1850. Her parents were members of the nobility and she was their first child. Her father was a captain in the Västgöta regiment and leased Ågården manor house in Råda parish. The family lived at the manor until the mid-1860s, at which point they moved into Stockholm. Augusta Wästfelt herself claimed that her parents brought her and her younger brother up to be patriots with an interest in Swedish history and that both children enjoyed reading aloud to their parents from Anders Fryxell’s history collection entitled Berättelser ur svenska historien. Indeed the influence of Fryxell’s book series evidently served as inspiration for Augusta Wästfelt’s own work given her tendency to insert facts about Swedish men who were prominent within political and military history spheres.

Augusta Wästfelt’s love of reading eventually led her to Stockholm’s reading salons which she joined in the early 1880s. She organised a large bazaar to generate funds to support the continuation and expansion of reading salons. Organising fund-raising bazaars for charitable purposes was a popular past-time for the women of the bourgeoisie at that time. During the ensuing decades Augusta Wästfelt was involved in several similar events albeit for military rather than literary aims.

The issue of national defence was a major political issue in late nineteenth-century Sweden and, as the conservative and nationalist daughter of an officer, military concerns were always close to Augusta Wästfelt’s heart. Hoping to provide material support for – and to awaken what she considered to be a dormant sense of people’s pride in national defence – Augusta Wästfelt came up with the idea in 1884 of establishing Svenska kvinnoföreningen för fosterlandets försvar. The organisation’s primary task was to fundraise for various military aims, initially to help improve the Karlsborg fortifications, and subsequently those at Boden, as well as to purchase Mauser rifles and ammunition to supply the volunteer rifle force.

Augusta Wästfelt was probably inspired to set up the organisation after reading press reports about a group of Danish women who had raised money to supply cannons for Copenhagen’s maritime fortifications. In Denmark, just as in Sweden, heavy debates were ongoing on the subject of national defence at this time. Augusta Wästfelt viewed the as yet incomplete Karlsborg fortifications as a clear example of a general Swedish aversion to and lack of interest in armaments, just like the Danes had highlighted conscription for Copenhagen’s maritime fortifications as a symbol of their military shortcomings. She launched her idea in a text entitled “Qvinnan och försvaret” (“Women and National Defence”) which was published in the spring of 1883 in the Nya Dagligt Allehanda newspaper, signed off anonymously by “En svensk qvinna” (“A Swedish Woman”). Afterwards she claimed that as she was a shy and retiring personality at the time it had only been “after a lot of doubting and worrying” that she had sent off the article.

The publication of the text marked the beginning of Augusta Wästfelt’s long-lasting public activism on behalf of armaments and national defence. She would reiterate the same nationalist perspective as expressed in the article along with encouragement to Swedish women to show their patriotism through funding activities in many of her texts. She was exceedingly keen on writing and published, amongst other things, a series of poems and stories, including the fairy-tale book Vid brasan: ur historien och sagoverlden which was published in 1890 and was richly illustrated by the artist and illustrator Jenny Nyström. Augusta Wästfelt was, however, opposed to women’s suffrage and in 1913 she wrote an fervent contribution to the general debate, castigating “politicised women” and the damage which she believed that the women’s suffrage movement threatened to impose on marriage, family and the nation.

Augusta Wästfelt was the secretary of Svenska kvinnoföreningen för fosterlandets försvar for 35 years. She remained heavily involved and active within every section of the enterprise. She was also largely responsible for the organisation’s publications and thus had major influence over how it portrayed itself, its activities and its motives.

Augusta Wästfelt resigned from the board of Svenska kvinnoföreningen för fosterlandets försvar in the autumn of 1919 due to her failing health. She died one year later as a result of a lengthy illness. She is buried at Norra begravningsplatsen (the Northern Cemetery) in Solna. 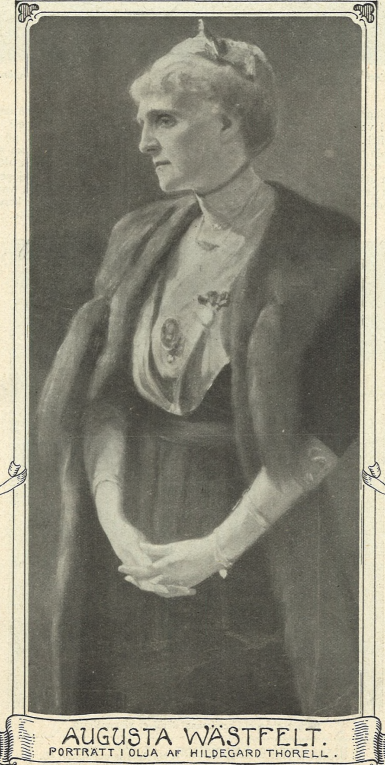