Aurora von Königsmarck was a writer of fiction who was also active within other cultural spheres. She served as an administrator for the noble secular canonesses in Quedlinburg in western Saxony.

Aurora von Königsmarck was born in 1662. She was brought up at Agathenburg castle, near Stade. There she taught music, French, Italian, Spanish, and Latin, which she mastered in addition to her mother tongues of Swedish and German. Following her father Conrad Christoph von Königsmarck’s death in 1673 she and her mother Maria Christina Wrangel and her sister Amalia von Königsmarck moved to Hamburg, where they lived from 1674–1680. The three of them moved to Stockholm, where they lived from 1680–1692, in order to protect their income with the help of influential contacts. In the Swedish capital they became part of the royal circle. Their cousins Ebba Maria De la Gardie and her sister Johanna Eleonora De la Gardie, with whom they had grown up at Agathenburg, were close to Queen Ulrika Eleonora the elder. Following an initial period living at the Wrangel palace on Riddarholmen the family moved into a building in Gamla Stan in 1686.

The family spent the summer of 1682 at Medevi brunn in Östergötland, where the three literary letters called Les Divertissements de Medevij were produced. Aurora von Königsmarck is considered to be the driving force behind the first Swedish production of Jean Racine’s tragedy Iphigénie on 7 January 1674 and 30 April 1684. The text of the play was performed in its original language. Additions included an allegorical prologue written by Aurora von Königsmarck in French in honour of King Karl XI, as well as balletic interludes. She herself appeared as a singer playing the part of La Gloire in the prologue and as a speaking actress in the part of Clytamnestre. All the parts were performed by women. Further, the Königsmarck circle along with Gustaf Düben the elder, royal music master, put on ballets and concerts for the court.

The religious poetry collection, called Nordischer Weÿrauch, which was written by the four young cousins in German and dates from 1690, includes 11 poems by Aurora von Königsmarck. Following her mother’s death in 1691, Aurora von Königsmarck went to live with her sister in Hamburg the next year. She composed the elegy on Queen Ulrika Eleonora’s death in 1693 as well as a magnificat in German, set to music by her friends Reinhard Keiser and Johann Mattheson. The vast majority of her literary output comprises occasional poetry in French, German, Latin, and Swedish. Aurora von Königsmarck participated in the celebrations for Duchess Elisabeth Juliana of Braunschweig-Lüneburg’s 60th birthday in Salzthal in 1694 as a singer, musician, and actress.

Aurora von Königsmarck clearly had an extensive network of contacts. Anton Ulrich of Braunschweig-Lüneburg’s novel, Die Römische Octavia, which dates from 1677–1762[!], portrays her under a pseudonym. The composer, singer, musical theorist, and diplomat Johann Mattheson used a full-length portrait of her as his frontispiece for Das Neu-Eröffnete Orchestre in 1713, and it is apparent from his Grundlage einer Ehren-Pforte, from 1740, that he had known her since 1703. Georg Christian Lehms 1715 work, Teutschlands galante Poetinnen mit Ihren sinnreichen und netten Proben, opens with an 11-page dedication to Aurora von Königsmarck, and refers to her in two of the catalogue-like accounts in the foreword as notable both in terms of her musical and linguistic expertise. He also provides a 10-page reference article on her in which he describes her as “die geistreiche und gelehrte Schwedische Gräfin” (the spirited and learned Swedish Countess). Four opera librettos dedicated to her are stored in Braunschweig and Hamburg.

When her brother, Philip Christoph, disappeared in Hannover in 1694 in mysterious circumstances Aurora von Königsmarck set out to learn what had happened. Following her initial lack of success she sought the help of Duke Anton Ulrich of Braunschweig-Lüneburg in Wolfenbüttel and of Elector Frederick August in Dresden given that her brother was in Saxon service. It turned out that Philip Christoph had been murdered. Her contact with the Saxon Elector turned into a four-year relationship, which resulted in the birth of her son Moritz. He later had a prominent military career in French service. In 1702 Aurora von Königsmarck petitioned King Karl XII on behalf of her brother-in-law Carl Gustaf Lewenhaupt. He was in Saxon service and had not followed orders received in 1700 to enter Swedish service and was consequently considered a traitor. The Elector of Saxony, Frederick August, who since 1697 was also the King August II of Poland, employed Aurora von Königsmarck as an envoy in order to achieve peace and form an alliance with Sweden. This came to nought. In 1706 Aurora von Königsmarck once again visited the Swedish king, this time in order to disabuse him of suspicions that she was disloyal to the Swedish Crown as this could have led to serious financial difficulties for her. She was successful in her mission and managed to avoid being put on trial.

Aurora von Königsmarck determined to make a career for herself amongst the Quedlinburg secular canonesses and held several posts within the organisation during the period of 1698–1718. She was coadjutor abbess until 1700, and provostess until 1704. She served as the official acting abbess until 1718 which meant that, in practise, she ran the institution as the post of abbess remained vacant. The institution served as a secular convent for women who had not taken vows, where unmarried noblewomen could find bed and board. Aurora von Königsmarck, who was unmarried, clearly saw her life there as a means to ensure a stable existence.

Aurora von Königsmarck died in 1728. Until the early 1900s her embalmed corpse was on display in the church of Quedlinburg castle. 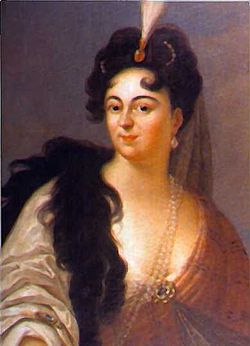