Barbro Alving, best known under the pseudonym Bang, was one of the first Swedish female war correspondents, as well as an active pacifist and supporter of women’s causes.

Barbro Alving was born in Uppsala in 1909 as the youngest daughter of the author and columnist Fanny Alving and lecturer and expert in Nordic languages Hjalmar Alving. When Barbro was eleven, the family moved to Stockholm and both she and her sister, Beat-Sofi (born 1907), were enrolled at the Whitlock co-educational school, where their father was director of studies. Already at a young age, Barbro began dreaming of a career as a roving reporter, travelling around the world, covering trouble spots and meeting the world’s biggest names.

Immediately after graduating in 1928 Barbro got started on her career path by working unpaid at Stockholms Dagblad. She was given the pseudonym Bang, which she kept for the rest of her life. Just a few months later, she was recruited as subeditor for the weekly Idun, where she worked for three years. She contributed frequently to the journal under various pseudonyms. She was most appreciated for the short, well-constructed and humorous film reviews of current releases, which she wrote as “Miss Bio”.

In 1931 Barbro Alving travelled to Paris to spend a few months learning French. Bang, who had a great zest for life, not only familiarised herself with the French language but also with Paris’ nightlife. In the spring of 1932 she began to study French and political science at Stockholm College (later University) but never graduated. In 1934 she took on a temporary position at Dagens Nyheter and was subsequently offered a permanent post. Her first foreign assignment for the paper was to provide additional reporting during the Berlin Olympics in 1936. Her reports became widely discussed far beyond the Dagens Nyheter readership. With humour, sharp-sightedness and a keen eye for detail, Bang successfully captured both the popular and the Nazi regime political developments related to the Games. Her work on the Games made her one of the newspaper’s most highly regarded contributors.

The previous year Barbro Alving had made her first forays into active peace work. She began working with the author Elin Wägner, who organised the peace action “Ned med vapnen” (“lay down your arms”), which encouraged women to refuse to take shelter or accept gas masks. This was done in the hopes of persuading the governing male elite to stop the worldwide arms race. Through this action, Bang came into contact with Ellen Hörup, a Danish peace activist and anti-Nazi campaigner, who worked with the League of Nations in Geneva. Bang was offered a post as Hörup’s secretary, took leave from her job and travelled to Switzerland in the autumn of 1936, but only lasted there for a few weeks. She struggled with the bureaucratic side of her position and longed to return to journalism.

Bang then made her way to Paris and, on her own initiative, set off for the civil war in Spain. She managed to get to Madrid and observed the fighting raging in the outskirts. In several reports, she described the various phases of the war and their outcomes, and her descriptions not only aroused emotions but also stirred anti-Franco sentiments in Sweden. Her report from a mortuary in Madrid has been called “perhaps the most beautiful cry for peace that has been written in Swedish”. She thereby consolidated her position as war correspondent.

Barbro Alving would soon claim yet another journalistic niche, that of royal correspondent for the likes of European royal weddings and coronations. No matter what area she was given to cover, she always performed with great ambition. She prepared meticulously, always arrived early, and took note of important as well as seemingly unimportant details. When she finally sat down to write her report, she was rarely satisfied until she had re-written it several times, sometimes as many as 20 times. She reported every event like a story and not infrequently came up with new words to draw her readers into the scenes she was describing.

Barbro Alving’s career was paused in early 1938 as she gave birth to her daughter Ruffa, baptised as Maud Fanny, on 25 February. The father was Dagens Nyheter illustrator Birger Lundquist. He already had a family and Barbro decided to raise her daughter by herself. She became much talked about for this and the expression “Bang-baby” became a recognized term in the late 1930s for children who were brought up solely by their mothers.

However, Barbro’s maternity leave was short-lived. In the autumn of 1938 she was sent to the continent to report, among other things, on how German troops were incorporating Czechoslovakia into the German state. Subsequently, she was asked to travel to Finland to cover the country’s negotiations with the Soviet Union, which culminated in the Finnish Winter War. This was her second war as a war correspondent and proved a real test given her avowed pacifism. She sympathized strongly with Finland in her reports – to such an extent that at one point the editorial board called her back to Stockholm because she was not fulfilling her obligation to remain neutral. Nevertheless, her reports, lively and touching as ever, were very favourably received and were used as advertisements in the search for new subscribers to Dagens Nyheter.

During the Second World War Barbro Alving was also sent to Norway to cover Germany’s invasion in the spring of 1940. She subsequently tried, of her own accord, to go to London via New York, but she was unsuccessful and had to stay in America for several months.

During the war years Bang got to know Loyse Sjöcrona, a Scanian noblewoman who worked as a registrar for the Swedish Dairy Association. They decided to live together and take on joint responsibility for Ruffa, and moved into Yrkeskvinnornas hus (the Career Women’s house) at Furusundsgatan 9.

In 1947 Dagens Nyheter sent Bang on a global reporting assignment. It happened to coincide with India’s declaration of independence and an armed revolt in Indonesia. She also visited Singapore, Hong Kong and China. While in Japan she wrote a much-discussed report on the victims of the Hiroshima atom bomb. She ended her travels in the United States of America.

The devastation caused by the atom bomb, particularly the human suffering and death, left a strong impression on Barbro. She became an even more fervently radical pacifist and when, in 1951, she was called up for a civil defence exercise, she refused to participate. This resulted in her being sentenced to a month in prison, which she served in January 1956. The judgement and period in prison led to headlines and Bang also reported on her time in prison.

When it was suggested, a few years later, that Sweden should procure its own atomic bomb, Barbro took a strong position against this. She became a leading member of the Aktionsgruppen mot svensk atombomb (the Action Group Against Swedish Atomic Bombs). Because Dagens Nyheter’s chief-editor, Herbert Tingsten, was a proponent of the Swedish atom bomb, Barbro gave up her job at the paper in 1958. She was hired by Vecko-Journalen instead. The weekly’s readership had already met her writings under the name “Käringen mot strömmen” ("the unorthodox lady") – a pseudonym she had used since 1942 to write causerie-style articles, which were very well-liked and published annually in book form.

Barbro Alving also spent many years working on a biography of her friend, mentor and second mother, Elin Wägner. Wägner had specifically requested at the time of her death in 1949 that Barbro Alving should pen her biography. It was a project that came to weigh on Bang. She amassed a lot of material but could never bring herself to write the biography. It was not until 1967 that she formally gave up the project and handed it over to the married authors Ulla Isaksson and Erik Hjalmar Linder.

The biography project disrupted her journalistic work to some extent, but Barbro never allowed it to prevent her from rushing out to such major and varied global events as the coronation of Elizabeth II in England in 1953, the Hungarian Revolution in 1956 and the boxing world championship between Ingemar Johansson and Floyd Patterson in 1959. The latter became a historically significant text: never before had a writer who disassociated themselves from boxing been allowed to cover a fight.

Barbro was a committed person, both as a journalist and as a member of society. She condemned violence and always promoted the rights of women. She embodied Wägner’s view that the society of the future must take all people into consideration, children as well as women and men. Barbro was also a spiritual seeker. Despite her great successes in both her career and as a maker of public opinion, she suffered from inner disquiet and anxiety and longed for an answer, a faith to find solace in. Through her great friendship with the author and translator Gunnel Vallquist she found a home in the Catholic Church. Barbro converted in 1958. Her new faith also left its mark on her journalism, not least in her travel to Rome to report on the Second Vatican Council in the early 1960s.

Further to her writing, Barbro Alving was a diligent contributor to Sveriges Radio, which valued her distinct, dark and expressive voice. In 1960 she got her own radio programme, “Bang with a typewriter and a record-player”, in which she both regaled and reflected, humorously and seriously, as well as played music.

During the late 1960s she got caught up in the leftist trends of the times. She became a member of Vänsterpartiet kommunisterna (the Swedish left-wing communist party) and became a strong critic of the Vietnam War, which was also the last war she covered in 1967. At the time she was suffering from cramps and had to be lifted in and out of the helicopter which flew her to the warzones. In 1982 she suffered a stroke which was followed by aphasia. She died in January 1987 and is buried by Ytterselö church in Södermanland. 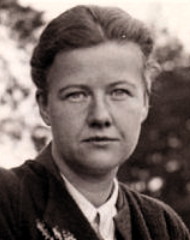