Barbro Nilsson was one of the most eminent Swedish textile artists. She was a designer, a weaver, and a teacher who was active during the first half of the twentieth century.

Barbro Nilsson was born in Malmö in 1899. She was the fourth child of Carl and Emma Lundberg. In 1904 the family moved to Stockholm where her father took on the post of general manager at the Nordiska Kompaniet (NK) department store. Barbro Nilsson’s mother was an artist who later became a well-known landscape architect. From 1919 onwards the family was settled at the Bullerbacken farm in Lidingö.

Barbro Nilsson was just 14 years old when she began her thorough training in weaving at Johanna Brunsson’s school of weaving in Stockholm. She remained a student there until 1918. The school’s expressed aim was to pass on the art of hand-weaving. It was considered to be one of the premier textile training institutes in Sweden and it also trained textile instructors. The school programme offered solid technical and theoretical instruction. Barbro Nilsson developed her interest in form and colours during her period at the school.

Once she had completed her training at the Johanna Brunsson school Barbro Nilsson worked as a teacher there herself until 1920. Then she began to study at Tekniska skolan (the technical school) in Stockholm (later known as Konstfack). By the time she had turned 25 years old in 1924 she already had many years of training and teaching experience in weaving under her belt. She had mastered a large variety of weaving techniques, including soumak, plain weave, tapestry weave and ‘flossa’ (pile). She then began to teach technical drawing and weaving at both the Johanna Brunsson school and at Tekniska skolan. She later became a visiting instructor at the Copenhagen arts and crafts school.

During the 1920s Barbro Nilsson set up her own weaving studio on Mäster Samuelsgatan in Stockholm. One of her most important sources of commissions was the Konfektionsaktiebolag Salén which ordered furnishing material and rugs. In 1928 Barbro Nilsson married the ceramist and sculptor Robert Nilsson. Following the marriage the couple set off on a three-year long overseas stint, facilitated by the receipt of an artists’ stipend. They were mostly settled in Rome during this period, which is where their son Pål-Nils Nilsson was born in 1929. Upon their return to Sweden the family settled in Stockholm. They spent their summers in Lerberget, south of Höganäs, which was where Robert Nilsson originally came from.

Barbro Nilsson’s main breakthrough came as a result of being commissioned to realise Sven X-et Erixson’s winning proposal for refurbishing the Gothenburg concert building in 1936. The Nilsson couple had also submitted entries to the competition which Erixon had won. Barbro Nilsson was subsequently tasked with producing Erixon’s proposed woven tapestry. This work, lauded for its painting-quality weaving technique and colour scheme, was just one of a series of fruitful collaborations with various artists in which Barbro Nilsson produced woven interpretations of their painted models. The first of these was with the artist Bertil Damm, who designed a tapestry for the vessel M/S Kungsholm in 1928. This was followed by a series of commissions with the likes of Olle Nyman and Endre Nemes. Barbro Nilsson’s great skills in a range of weaving techniques not only enabled her to produce painting-quality products but also gave her artistic freedom in the weaving process.

In 1942 Barbro Nilsson was appointed head of Märta Måås-Fjetterström’s weaving studio in Båstad. It was in conjunction with this that Eva von Zweigbergk of Dagens Nyheter dubbed her “the number one Swedish female textile artist”. Barbro Nilsson brought several of her former students from Konstfack, such as Marianne Richter, Ann-Mari Forsberg, and Barbro Sprinchorn, with her to the studio. The architect Viggo Sten Møller was of the opinion that Barbro Nilsson was possessed of “a far richer skill at translating inspirations into patterns than Märta Måås-Fjetterström’s self-assured but philosophically weighty art”. In contrast to her predecessor, Barbro Nilsson had solid practical weaving skills. She made use of more dynamic designs facilitated through the freer styled tapestry-weaving technique instead of her predecessor’s strict plain-weaving compositions. By weaving the piece on a vertically taut warp – so-called ‘haute lisse’ – Barbro Nilsson’s finished weaving resembled a painting on an easel and allowed the ongoing work to be viewed from a distance. This certainly contributed to the painting-esque nature of Barbro Nilsson’s weavings.

Barbro Nilsson’s compositions for public artworks and rugs often took their inspiration from nature which served as the starting point of abstract patterns. This testified to her deep familiarity with the wealth of natural shapes. Many of her rugs display decorative, sometimes grid-like outer patterns which were overlaid by zigzag or wave patterns. In general her work is characterised by stylised natural patterns along with her “genial sense for colour schemes”. She produced the rug called Snäckorna in 1943 and it became one of her most frequently woven rugs. It was the first in a series of rugs woven using the tapestry technique which allowed for softer designs when compared to the more common plain weave.

From the early 1930s onwards Barbro Nilsson began to create decorations for church interiors. In total she produced church textiles for just over 40 Swedish churches. The first was produced in soumak weave for Viksta church in Uppland. The Gustaf Adolf church in Helsingborg is particularly richly decorated and the acoustics of the building have been improved by the addition of weavings and pile rugs for the choir. In Stockholm Barbro Nilsson provided textiles for the Kungsholmen church, the St Markus church in Skarpnäck, as well as the Storkyrkan pile rug called Livets träd. Amongst her series of other church commissions we can name Västerås cathedral, Gräsö church, Lerberget church, Stora Hammar, Skarhult, and Markaryd church.

Barbro Nilsson also produced a large number of other public commissioned works, including pieces for the Swedish embassy in Moscow, Stadsbiblioteket in Helsingborg, Handelsbanken in Stockholm, as well as the Supreme Court. One of her biggest commissions was for Sydsvenska Kraft AB in 1966 for whom she created seven woven textiles, each symbolising different natural forces, such as the sun, gushing water and steam. Each design includes the mythical figure of the water horse. These pieces are considered to be her finest creations due to the range in colour scheme.

Throughout her life Barbro Nilsson intermittently worked in collaboration with her husband Robert Nilsson. She carried on working until late on in her life. She died in 1983, aged 84. Today her work is keenly sought-after on the art market and generates elevated prices at the major auction houses. Her work can be found at the National museum and the Nordiska museum in Stockholm, the Röhsska museum in Gothenburg, Malmö museums, as well as museums in Copenhagen and Trodheim. In 1948 she was awarded the royal Litteris et Artibus medal, and later the Prins Eugen medal, along with a wealth of other Swedish and foreign cultural prizes and merits. 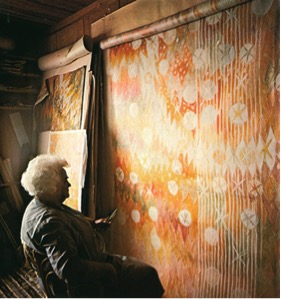