Barbro Svensson, as she preferred to call herself, or Lill-Babs, as she was most often called in the media, can most easily be described as a phenomenon. She had a career as a singer from 1953 until her death sixty-five years later, had innumerable one-woman shows, roles in musicals, TV appearances, recordings, acting performances, and programme leader assignments, but was mainly known to her contemporaries as weekly magazine material. Sensational gossip about supposed romances on one newspaper placard, and Lill-Babs’ cake recipes on the next.

For far more than a half century, she lived her life under the public gaze. Her parents Britta and Ragnar, as well as her daughters Monica, Malin and Kristin, appeared with their names and photos in the press. For a couple of generations of Swedes, details of her life such as her origins in Järvsö in the province of Hälsingland and being discovered as a teenager by the bass-player and record company director Simon Brehm, are to be considered as general knowledge.

She had her break-through in the mid-1950s. That was when she was given her artiste name, alluding of course to the slightly older and very well-known star singer, Alice Babs. Lill-Babs sang popular songs in the spirit of the times: melodious, well-orchestrated songs lasting two to three minutes, often with melodies purchased from abroad, preferably with texts in a comical vein. In her break-through song ”Är du kär i mig ännu, Klas-Göran?” from 1959, in which the singer is a clueless country girl who has been cheated upon, she sings in broad dialect. ”Tuff brud i lyxförpackning” and ”Itsy Bitsy Teenie Weenie Yellow Polka-dot Bikini” were to rise from being ephemera to taking their place in an unofficial canon of classics.

Right from the beginning, Barbro Svensson was prepared to work hard. She travelled round the whole country on a tour of folk parks while at the same time broadening her artistic register. At the end of the 1950s, she met the humour duo Carl-Gustaf Lindstedt and Arne Källerud, who ran the revue theatre Nöjeskatten in Stockholm. She stayed there for a few years and also performed in the film productions of their original comedy shows Svenska Floyd in 1961 and En nolla för mycket in 1962.

She participated in the Eurovision Song Contest, Swedish final (currently Melodifestivalen) in 1960 and 1961, representing Sweden in the international final in 1961 with ”April, April”; performed in the same programme as The Beatles in the TV series Drop In in 1963 (she wrote her autograph for them and forgot to ask for theirs); and built herself such a solid career in West Germany that she had her base there for several years. Nordic singers went down well in the German-speaking world; others like Siw Malmkvist, Anita Lindblom, Ann-Louise Hanson, Bibi Johns, Norwegian Wenche Myhre and Danish Gitte Henning also recorded and toured in West Germany. The Swedish press reported that Lill-Babs had met a German man — the pop singer Peter Krauss — and planned to settle down there permanently.

That did not happen however. She returned to Sweden, met the seven-year-younger aspiring artist Lars Berghagen, married, had children and worked. In 1967, Simon Brehm, the man who had discovered her, died at the age of only 45. During the rest of her life, Barbro Svensson was never heard to say a bad word about him, even though she described him as at the very least patriarchal when he administered her whole income to start with, and even decided the times she was allowed to be out.

After Brehm’s death, she felt, according to herself, artistically lost. However, she soon found a home in popular shows in restaurants, as they came to be developed in the late 1960s. Alone in the bright lights onstage, with an orchestra and choir and/or dancers, she performed a large number of one-woman shows. TV producer Karin Falck became her personal director, and popular singer-songwriter Barbro Hörberg her most sensitive text writer. Barbro Hörberg’s premature death in breast cancer in 1976 was described by Lill-Babs as a blow comparable to Brehm’s death nine years previously.

Show restaurants like Bacchi Wapen, Hamburger Börs and Berns in Stockholm, Trädgår’n in Gothenburg, restaurant Kronprinsen in Malmö, Chat Noir in Oslo and Fiskartorpet in Helsinki were frequently visited by Barbro Svensson during the 1960s, 1970s and 1980s. There the show artiste Lill-Babs developed the intimate way of addressing her audience and the audience contact that were her real strengths as an artiste. Barbro Hörberg gave her the text ”Du — publiken” (You – the audience), created after a heartfelt conversation between both Barbros, and she sang it regularly throughout her career (”You are the audience / I am me / and you have taught me / what I know and can be”).

In 1974, Lill-Babs passed another milestone in her career as an artiste: the main role as the sharp-shooter Annie Oakley in the musical Annie Get Your Gun. It was produced in an ambitious theatre version in the gigantic Scandinavium arena in Gothenburg, and was performed twelve times for an audience of over 100,000 people. Although the production displayed several big names, circus numbers, popular melodies like ”There’s no business like show business” and ”A man with a gun”, and a large orchestra, it was generally considered to be Lill-Babs’ show. Culture critics called it purely and simply her break-through, apparently unaware that she had had many such during the twenty previous years.

On the whole, there was constant tension between Lill-Babs and the so-called serious world. Right or not, she believed herself to be disliked by both the gourmets of the cultural world and the growing women’s movement. Her glittering and well-made-up appearance — she seldom appeared in public without high heels — may have obscured her artistic qualities. Her regular appearance in the weeklies and the gossip magazines coded her as light-weight although conservative. That she and others showed that she was a woman pioneer as an entrepreneur and employer hardly made any difference to a socialist women’s movement that did not see entrepreneurial activities as an entirely positive phenomenon.

The poet and member of the Swedish Academy Lars Forssell belonged to her defenders in this partly artificial conflict. He wrote a whole show for her that was a success in 1982 and that once again was considered a break-through. It was asserted that Forssell’s well-considered language drew out a new side of this supposedly superficial show actress Lill-Babs. It is questionable however whether or not this particular cooperation with Forssell really was so different from what she had been doing previously. During the whole of the 1970s, she had often and willingly performed texts with artistic ambitions, Hörberg, Beppe Wolgers and — Lars Forssell.

During the early 1980s, media also contributed to the image of the promiscuous Barbro Svensson. That she never settled down, that she had children with three different men and that she ended up on the placards every time she danced close to a male acquaintance at celebrity parties stamped her as a slut in so-called permissive Sweden.

The greatest sensation was created by Malmö TV’s This is your life in 1983, in which the editorial staff organised twelve of her old romances to make their entry in line singing ”Är du kär i oss ännu, fru Svensson?” (”Are you still in love with us, Mrs Svensson?”, a parody of her old hit) and programme leader Lasse Holmqvist made jokes on the theme of ”we couldn’t fit any more of them into the studio”. The editorial staff said in their defence afterwards that they had wanted to show how well-liked she still was by her old flames. Barbro Svensson herself complained afterwards how this practical joke created an image in the general public mind that she had to put up with for a long time. Jokes were made not least when she — of all people — led SVT’s dating programme Who takes whom? (1990–1993).

Trends came and went, many artists slipped from the limelight into media shadow, but Barbro Svensson succeeded mostly in keeping herself to the fore. During the 1970s, she also took part in the revue genre; in the 1980s and 1990s, she led TV programmes; in the first decade of the new millennium she performed regularly for Swedish tourists in the Canary Islands; in the 2010s she summed up her life and her career for a partly new audience in TV4’s Så mycket bättre (So much better) and SVT’s Stjärnorna på slottet (Stars in the castle); and as recently as 2017 she made her debut as an actress in a sitcom, in SVT’s Bonus family. She often started her concerts by joking that she had been standing on the stage for 60/61/62 etc years – ”and I’m still only 50”. With pride she announced that she had ”never made a comeback”, but untiringly supported herself and her family.

Now and then during her last years, Barbro Svensson and two colleagues who had also made their debut in the 1950s and kept their careers going since then, Siw Malmkvist and Ann-Louise Hanson, decided to collaborate on a shared project. They toured for several years and had several concerts planned when Barbro Svensson died of cancer combined with heart failure in 2018, at 80 years of age. She lies buried in Järvsö Cemetery. 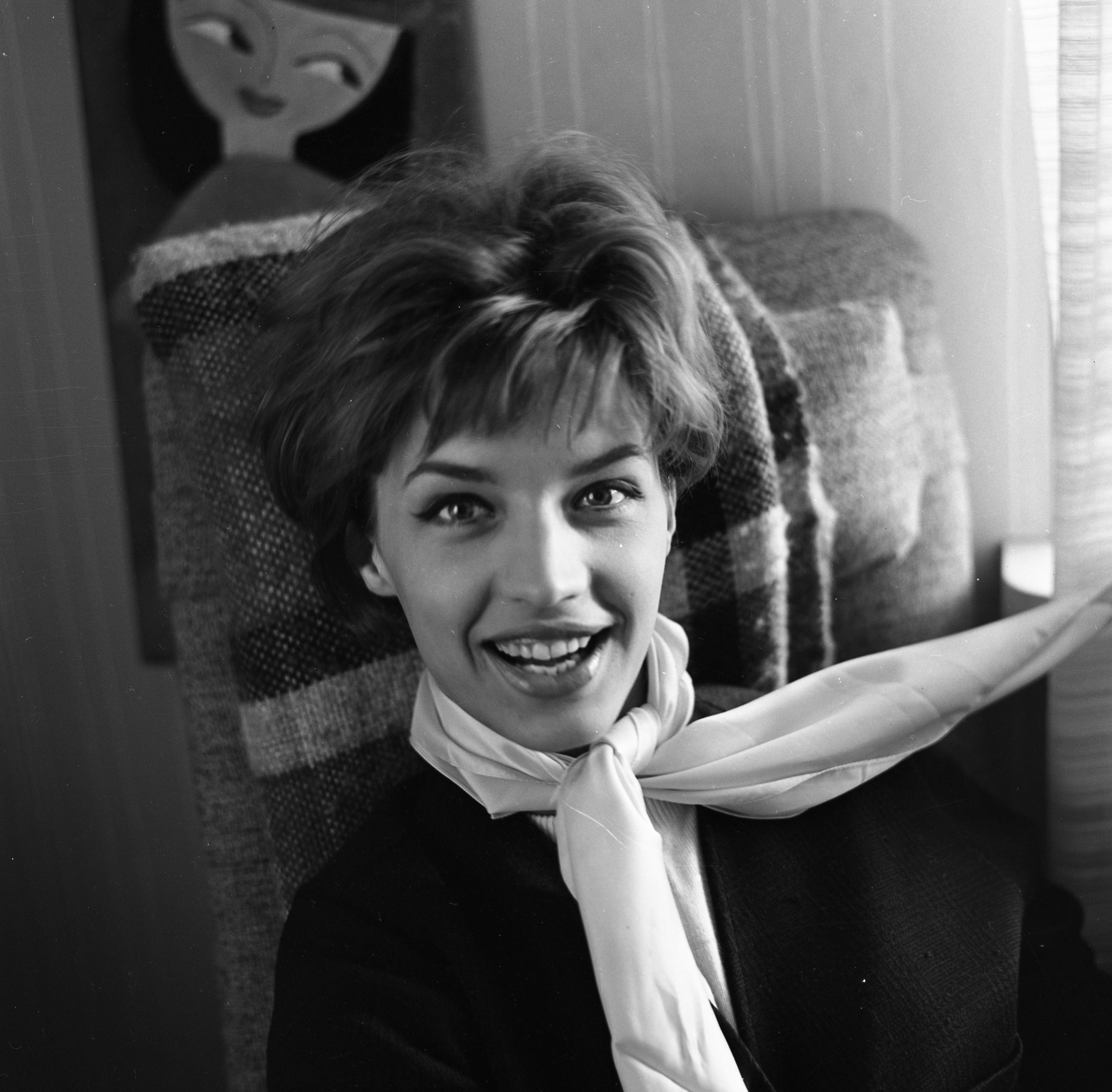