Barbro Werkmäster was an author and an expert on art. The books and articles that she published from the 1970s onwards helped to shake up outdated patriarchal perspectives and led to new understandings, particularly in the sphere of children’s culture and about female artists, their works and their circumstances.

Barbro Werkmäster was born in Söderhamn in 1932. She was the daughter of Erik Norling, a postmaster, and Hilma (née Green), a postal assistant. Barbro Werkmäster matriculated in Söderhamn in 1952 and then she graduated from Grafiska Institutet (GI) in 1955. In 1957 she married Jerk-Olof Werkmäster, a graphic designer and they had three children, born during the 1959–1964 period. She worked as a publishing house editor at Skrivrit in Uppsala from 1955–1956 and at Bokförlaget Forum in Gävle from 1956–1959. Ten years later, in 1969, she gained her Masters degree at Uppsala university.

Barbro Werkmäster joined Grupp 8 at an early stage and concepts of sexual equality as promoted by the women’s movement found expression in all her writings and activities. The Uppsala Könsrollseminarium (gender roles seminar) run by literary expert Karin Westman Berg served as an important source of inspiration to Barbro Werkmäster. The seminar, which ran from 1967 onwards, invited researchers and authors to give lectures and lead discussions. In the early 1970s Barbro Werkmäster took on the role of chair of Uppsala county’s Kulturarbetarcentrum and for a turbulent period she also served as chair of Författarförlaget’s board.

Barbro Werkmäster’s written work deals with various subjects. Although she did publish in her own right she often wrote as half of a pair, for example in 1971 she published the widely disseminated Frihet, jämlikhet, systerskap in collaboration with Maud Hägg. Their next effort, a polemical work entitled Kvinnor och sex which comprised historical overviews and proposals for a radical programme of engagement, was published in 1973 and similarly widely-distributed. Barbro Werkmäster’s written output also encompassed children’s and youth literature: Visst kan tjejer, published in 1973, and Krasch from 1975, produced in collaboration with the artist Anna Sjödahl.

At the same time Barbro Werkmäster also began her groundbreaking investigation into children’s picture books published in Sweden during the 1800s. Two of the children’s authors she studied were Ottilia Adelborg and her 1896 picture book entitled Pelle Snygg och barnen i Snaskeby and Jenny Nyström, one of the first mass-media artists thanks to her output of book illustrations and popular images of brownies and elfs. In 1985 Barbro Werkmäster and Lena Kåreland co-authored and published Möte med bilderboken, which was intended for use in university courses and dealing with Tove Jansson’s picture books. What was new and unusual in their approach was their re-evaluation of both children’s literature and those who created it – mostly women. Children’s literature might at first glance seem an uncontroversial subject, but that was not how Barbro Werkmäster viewed it. Her analysis of the sexualised symbolisms found in Elsa Beskow’s well-known story Tomtebobarnen, published in the art journal Paletten in 1973, caused ructions amongst art-historians and others. Nowadays the inflammatory article is considered to be a classic and it was re-printed in the jubilee edition of Paletten.

Barbro Werkmäster, from Uppsala, and Anna Lena Lindberg, from Lund, met at an art history conference in 1971 and this led to collaborative efforts. The next year they joined Nordiska sommaruniversitetet’s study group investigating the cultural oppression of women. Along with other academics from the women’s movement they attended a conference held in Tisvildeleje in Denmark and initiated a discussion which questioned the male-coded canon of art history, namely the set of art work which hitherto represented art history as a whole. The two women were alone in Sweden in focusing on this uncharted territory, criticising the limited approach taken towards art history. The women realised the necessity of new fundamental research as well as inventorying and studies of previously neglected areas. In sum, they sought to redo almost everything they had learned as art historians.

Until that point neither a complete school of thought nor an established methodology had arisen and the recognised concept of gender had yet to be formalised. Linda Nochlin was at the head of a discussion ongoing in the USA which questioned “Why don’t female artists figure amongst the masters?”. This gave the two Swedish women moral support although Barbro Wermäster and Anna Lena Lindberg actually went further than discussing how the concept of genius had coloured the dominant understanding of art. The two Swedes also questioned the concept of genre, of just what can be considered to be art. Textile images (at the time viewed as a woman’s domain) was treated like applied art, namely as something other – and less interesting – than painting and sculpture.

Several years would pass before a publishing house could be found who dared to publish the two women’s anthology Kvinnor som konstnärer, released in 1975, which subsequently served as the starting gun for feminist writing on Scandinavian art-history. Barbro Werkmäster and Anna Lena Lindberg made discoveries in the archives and museums. They found a beautiful portrait by then uknown painter Oda Krohg, dating from 1888, in Oslo’s Nasjonalgalleriet. Although the canvas had long been in the museum’s collections it was rarely displayed. The two Swedish academics viewed this portrait by Oda Krohg as a symbol of the independent female artist and they used it as the cover illustration of their book. Today both the painting and its painter enjoy iconic status.

The two Swedish academics were often subject to harsh and irrational criticism. Younger artists, however, shared their views and asked Barbro Werkmäster and Anna Lena Lindberg to contribute articles to their catalogues, books, and journals. One of the two women’s first commissions was for the catalogue for the 1980 Vi arbetar för livet exhibition held at Liljevalch art gallery in Stockholm. In their article “Hon har talang – tyvärr” the two academics opted to present the artists’ forerunners from the preceding century and modernism’s breakthrough in 1880s Swedish art. The article described little-known artists and how women who had attended the Royal Swedish Academy of Fine Arts in Stockholm had to continue their artistic training in Paris, leading literally parallel lives within the Scandinavian artists’ colony alongside their male colleagues. Through comparative image analysis Barbro Werkmäster and Anna Lena Lindberg discussed these female artists’ motifs and styles. The exhibition was a public success which subsequently toured nationwide. It was, however, not a hit with the reviewers, as the authors later discussed in the 1981:4 issue of Kvinnovetenskaplig tidskrift, dedicated to art.

At this time the duo were asked to write a piece for Lea Vergine’s impending Andra hälften av avantgardet 1910–1940 exhibition, which was intended to open at Kulturhuset in 1981. Once again Swedish research into the area was lacking and Vergine had listed her international material as part of modernism as a means to fixing that lack. Barbro Werkmäster and Anna Lena Lindberg instead organised the contents thematically, for example “Mansgrupp-kvinnogrup”, “Den kvinnliga bohemen”, and “Verklighetens stil”. Their image analysis – including that of Sigrid Hjertén’s key 1917 work Ateljéinteriör – generated strong responses, both favourable and hostile. Thus by 1980 female artists and their role in art history remained a largely unknown quantity.

Barbro Werkmäster maintained her interest in modernism, returning to this concept several times. At the Den otrologia verkligheten exhibition held at Prins Eugens Waldemarsudde gallery in 1994 she highlighted 13 female artistic pioneers – most of whom were still largely unknown figures – as important revitalisers of twentieth-century Swedish art. As Barbro Werkmäster stated in her “Transgressing boundaries” catalogue entry it was the unspoken laws of both art reviews and art history writing which had resulted in the marginalisation of female artists and their contributions. The text takes a deeper look at and expands earlier views of female artists and their contributions and reveals just how innovative many of them were.

The public’s interest in these newly discovered modernists has continued, resulting in more exhibitions, and Barbro Werkmäster’s piece was reprinted in the catalogue for the De berömda och glömda. Kvinnliga svenska modernister 1900–1930 exhibition held at Mjellby konstmuseum in 2006.

One of the many outcomes of Barbro Werkmäster’s research into nineteenth-century Sweden was a collaborative effort with Eva-Lena Bengtsson and their 2004 book Kvinna och konstnär i 1800-talets Sverige. Their revisionary account shows that many of the forgotten female artists had been so successful that by the turn of the twentieth century they came to be considered a threat. They were denigrated as lesser artists — who were “women”, no less. The two authors responded with a richly illustrated selection of paintings, textile art, and graphic art, the latter a new sphere which attracted a lot of women at the time. Barbro Werkmäster had particularly contributed to bringing one of these nineteenth-century female artists to wider attention by being involved in setting up the first Swedish women’s art museum, Museum Anna Nordlander, in Skellefteå.

Advanced age had no impact on Barbro Werkmäster’s vitality. At the age of 73 she instigated the magnificent 2005 Konstfeminism exhibition, which displayed the work of Swedish artists, including some men, from 1960s onwards. These works expressed new attitudes towards gender, sexuality and human relationships.

Barbro Werkmäster’s innovations and moral courage garnered her respect and many friends. Her contributions as a researcher and teacher gained official academic recognition when the department of humanities at Uppsala university awarded her an honorary doctorate in 2000. 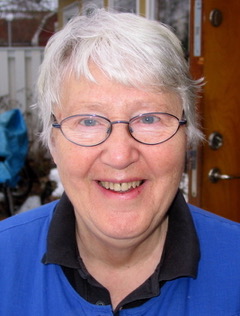