Carolina Östberg was one of the most famous and beloved singers of all on the Swedish opera stage during the last decades of the 1800s.

Carolina Östberg was born in Stockholm in 1853. She was the daughter of the master barber surgeon Johan Ludvig Östberg and Beata Ulrika Wallberg. Even as a child, Carolina Östberg showed that she was naturally musically gifted. It was however not until she was about 16, and accepted as a pupil at the Royal Swedish Academy of Music, that she was given the opportunity to develop this talent further. Carolina Östberg studied Christina Nilsson’s and Zelia Trebelli’s singing methods thoroughly when they visited Sweden, but she considered that she had her singing teacher, Professor Joseph Günther, to thank for her highly developed singing technique.

After three years of studies, she made her stage debut at the Royal Theatre, nowadays the Royal Opera in Stockholm, when she entered the great stage in the role of Anna in the opera Der Freischütz, on 15 December 1873. The critics wrote that this unusually talented debutante had a soprano voice with a fresh, clear and pure timbre and that she also showed evidence of careful training in coloratura. The year after, she had yet another achievement in the male role Carlo Broschi in Daniel Auber’s opera La Part du Diable, and was given a contract. During her three years at the Royal Theatre, she created important Mozart roles such as, among others, Susanna in Le Nozze di Figaro and Papageno and one of the genies in Der Zauberflöte. For each new performance, Carolina Östberg won ever greater recognition from critics and audiences alike.

When her contract ended in 1877, Carolina Östberg planned to educate herself further in St Petersburg. However, the journey was cancelled since instead she married the wholesale dealer Moritz Horwitz the year after, and chose to leave the stage to the audience’s great disappointment, apparently permanently. The prevailing period of depression in Sweden meant however that her husband’s income was very meagre. Carolina Östberg decided to return to the stage once more. Her unexpected return in 1879 as the title role in Franz von Suppé’s operetta Boccaccio on the stage of Nya teatern was such a roaring success that it created total Boccaccio-fever in the capital. The acclaimed performance sold out time and again and Carolina Östberg was paid a staggering fee of 100 kronor per evening. Her engagement at Nya teatern lasted until 1885 and she played the main role in among other works Charles Lecocq’s opera Le Petit Duc, Madame Favart by Offenbach, and Charles Grisart’s Les Poupées de l’Infante. During her years at the theatre, Carolina Östberg gave guest performances at many other theatres, for example in Denmark in 1880, Germany and the Netherlands in 1882—1883 and Norway in 1885.

When Carolina Östberg once again was given a contract at the Royal Theatre in 1886, this was considered a triumph for the audience who had demanded her return to the great dramatic stage for a very long time. Apart from a break for touring America in 1892—1894, Carolina Östberg belonged to the permanent ensemble at the Royal Theatre until 1906 when she resigned to work as a private singing teacher, an enterprise that she had carried on parallel to the theatre for several years.

Carolina Östberg died on 27 February 1924. She lies buried at the Northern Cemetery in Solna. Her voice has been preserved on nine gramophone recordings from 1905. 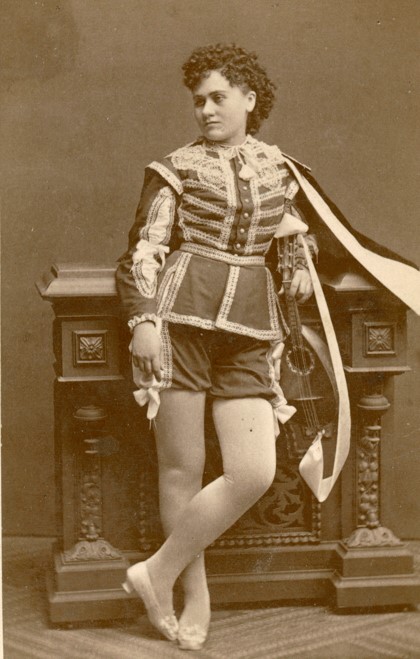