Beatrice Lesslie was one of the first women in Sweden to become the managing director of a major industrial company, Konfektions AB Lesslie of Gothenburg. She was also awarded the Finnish order of the Vita Ros (white rose) for her efforts on behalf of Finland during the Second World War.

Beatrice Lesslie’s childhood home was that of a civil servant in Örgryte. Her father was a prison service official and Beatrice Lesslie was his only child. In her youth she worked within the retail trade in Gothenburg. She married Otto Lesslie, the Finnish consul in Gothenburg in 1917. Her husband, who was born in Åbo in 1879, had set up Konfektions AB Lesslie together with the merchant Alfred Heyman in 1910. The company fell into Otto Lesslie’s ownership on Heyman’s death in 1918. Otto Lesslie remained its managing director until his own death in 1936. Beatrice Lesslie then took over the position of managing director upon becoming a widow. At this time she also had to care for her three teenaged children. The company had 260 employees and an annual financial turnover of 1.8 million Swedish kronor.

Beatrice Lesslie had already been responsible for the company’s financial administration for more than ten years during her husband’s lifetime. She served as the chief book-keeper and rapidly disproving the assertion that “things will go to hell if a woman takes over this role” as made by her dismissed predecessor. Under her leadership the company’s output increased significantly whilst the enterprise remained at its original premises of Karl Johansgatan 60-62. She kept up with fashion developments in Paris and always produced products of solid quality. Lesslie’s ready-made clothing, with its trademark butterfly symbol, continued to increase in popularity. Production focused on ladies’ coats, walking suits, and furs. During the mid-1950s 70,000 pieces of clothing were produced every year, to a value of about 8 million. At its height the company numbered nearly 350 employees. Subsequently, competition stiffened and the company – just like the trade as a whole – suffered from the difficulties caused by excess capacity.

Beatrice Lesslie was one of the mainstays of the Förening Norden’s western Swedish network during the war. During the final years of the Second World War – which were ruinous for Finland – she supported Finnish refugees in Stockholm. She also contributed significant sums to Finlandsinsamlingen (the collection for Finland) and was responsible not just for the support of Finnish war-wounded in Gothenburg but also for the maintenance of Finnish children on Amundö. She was awarded both the Order of the White Rose of Finland and the bronze medal commemorating the Finnish Winter War. The bronze medal was a remarkable award and was only given to those who made significant civil contributions to Finland’s cause during the war. She also ensured that aid parcels were transported to those in need in Norway during the occupation. This work was undertaken covertly but this made it no less important.

Beatrice Lesslie further devoted herself to social welfare work in Gothenburg, including in her role as chair of Göteborgs stads yrkesskolor (Gothenburg town vocational schools) in 1944 and through her administrative work on behalf of the Praktiska Kommunala Mellanskolan (practical municipal secondary school) of Gothenburg. She has been recognized by Gothenburg city which named a street after her, namely Beatrice Lesslies gata in Högsbo.

In July 1919 Beatrice Lesslie became the second woman in Sweden to obtain her driver’s licence. She was also a competent horse-rider and owned several of her own horses. During the later period of her life she devoted her spare time towards collecting stamps and dolls from the 1700s dressed in original costumes.

Beatrice Lesslie died in Gothenburg in 1967. She is buried at the Östra cemetery in that town. 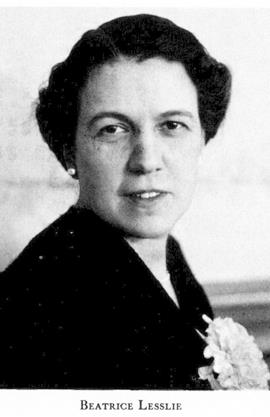