Berit Spong was a very productive author who primarily wrote fiction associated with her local area and containing themes related to women’s history and cultural history.

Berit Spong was born in 1895. She grew up on the outskirts of Motala. Her father was a building contractor whilst her mother, who hailed from a crofting background, moved up the social scale by training as a junior-school teacher. Berit Spong’s writings were heavily influenced by the Östergötland landscape.

Having completed her studies at Uppsala Berit Spong then spent a few years during the 1920s working as a teacher at girls’ schools and at junior secondary schools. She also undertook language study trips to Germany, France, and Italy. In 1925 she married Bertil Malmrot, who was also a teacher and who gained a PhD and later became a school headmaster.

Berit Spong’s first publication was a critically-acclaimed poetry collection called Högsal och örtagård which was released in 1924 through the Norstedts Förlag publishing house. No less than six editions were printed. In tone the poems remind one of the literary 1890s and Berit Spong can be included amongst the poets of the 1920s known as ‘lyrical intimists’, who wrote idyllic poetry. Berit Spong’s second poetry collection, called Lärkornas land, published in 1929, is typified by a spirit of national romanticism, albeit with provincial themes. Her third and final poetry publication, Dam med parasoll from 1937, testifies to a newly-adopted objectivity, including a personal understanding of the tension between fantasy and reality.

Berit Spong’s ensuing literary efforts were all in prose. Her output included both short-story collections and lengthy novels which were published in a steady stream by Norstedts Förlag. Her first collection of short stories published in 1926 was called I Östergyllen and contained traditional stories from her home area. The next short-story collection, entitled Kungsbuketten and published in 1928, was again based on folklore themes in which non-conforming and unusual individuals in the countryside found themselves subject to the pressures of normality. Similar stories are also included in Berit Spong’s 1934 publication Slottet på rullgardinen.

Berit Spong’s success, as a poet, a short-story writer, and as a novelist attained its peak towards the end of the 1940s. She was awarded the Övralid prize in 1947. In 1950 she collated a series of previously published short stories into a single volume entitled Vårt eget. On the back cover of this book Fredrik Böök, then a leading critic, described Berit Spong’s stories as fresh, natural, refined, and beloved by many readers.

A few years later she published the novel Sjövinkel which caused a scandal. This was a roman à clef which dealt with the so-called Strängnäs ‘head-master’s feud’ of 1948–1949 – in which her husband, Bertil Malmrot, the head-master of the local school, had central place. No less than nine editions of the book were published. This was a fiery polemical book intended to defend her husband’s and her own honour which had been insulted by the narrow-mindedness and mendacity typical of small towns. However, it can also be described as overly litigious. Birgit Antonsson has closely analysed the dispute. Berit Spong’s next novel, Bröder i Christo, from 1952, similarly deals with the hypocrisy and social ostracism promulgated by the church.

Berit Spong’s following novels were set in completely different eras and milieus. The 1957 Ingen sommarhimmel and Under svart vimpel, from 1958, are both situated within the world of German officers in small German towns during the late 1800s. Themes of narrow-mindedness, gossip, and conspiracies reappear in these novels but it tends to be the female characters who are humiliated.

In 1950 Berit Spong and her husband acquired Tjälvesta farm in Snavlunda parish in Närke. Life on the farm, involving renovations and researching its history, culminated in Berit Spong’s 1960 book Vägen genom ängarna, which also included drawings by Gunnar Brusewitz. Berit Spong was very skilled at conveying her knowledge and cultural-history esprit in a relaxed manner.

Her 1963 novel Kråknatten portrays the lives of people who lived at a manor as well as local crofters. Berit Spong’s 1967 documentary novel, Barnen från Tarrow, recounted the stories she had heard from her German foster-daughter. Berit Spong’s last series of publications were collections of short stories: Historier kring Vättern, from 1968, Historier från hemtrakten, from 1969, and Morris och hans rivaler, from 1970. The first two of these portrayed specific areas of Sweden whilst the last book tells of Berit Spong’s relationships with her cats.

For several decades Berit Spong’s writings formed a regular part of the Swedish public’s general reading material. Although she led a fairly conservative lifestyle herself she often portrayed other social classes in her writing. Previously Berit Spong’s books belonged to standard holdings of Swedish public libraries. Given that, by the time of Berit Spong’s death in 1970, Swedish society had undergone a radical transformation her books have since been taken off the shelves. She is buried in Olai Petri Cemetary in Örebro. 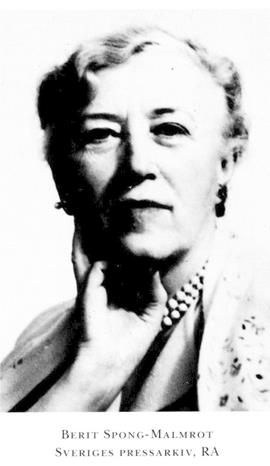