Bertha Hübner was a pioneer in Swedish textiles and handicrafts. She ran the shop Svensk Konstslöjdsutställning in central Stockholm together with the artist Selma Giöbel.

Bertha Hübner grew up with her mother, father and younger brother Lennart. Her brother chose a career in the military while Bertha chose a more humanistic path in life. As a young person, she became involved in the Swedish women’s movement, in the associations Sällskapet Nya Idun, Fredrika-Bremer Förbundet and Handarbetets Vänner. In her own business, Svensk Konstslöjdsutställning, she and Selma Giöbel did much to advance the progress of design in Sweden.

Just like Handarbetets Vänner, Svensk Konstslöjdsutställning sold handicrafts – a broad assortment of brasswork, wrought iron and textiles, produced in the firm’s own atelier or purchased from craftspeople all round Sweden. After ten years, the company was restructured. Selma Giöbel resigned and Bertha Hübner continued to run the shop at Norrmalmstorg. She remained as the director for 14 years. The Giöbel siblings participated in the World Exhibition in Paris in 1900, where Bertha Hübner and Selma Giöbel together received a gold medal as well as a mention as “officières de l’Académie” by le Ministère l´Instruction Publique. Five years later, in 1905, Bertha Hübner was awarded the medal Litteris et Artibus in Sweden for her "eminent artistic contributions”.

Parallel to her work with her business, Bertha Hübner was active in the women’s movement. She became a member of Sällskapet Nya Idun early on, serving as secretary in 1909—1910 and chairwoman in 1910—1918. With Sofia Gumælius, Selma Giöbel and Hildegard von Franken, Hübner founded the women’s club Kvinnoklubben, in which she was to serve as chairwoman for several years. In Kvinnoklubben’s own premises, firstly at Gamla Norrbro, then at Hamngatan 18 b in central Stockholm, women telegraphists, teachers, bank clerks and other middle-class professional women could meet and borrow books, chat or eat together after the end of their working day. The aim of the club gradually changed and it became more of a gathering point. On account of the members’ age and diminishing activity, Kvinnoklubben finally closed its doors in 1998. Bertha Hübner was also active in the Swedish section preparing for participation in the suffrage congress organised by the Women’s International League for Peace and Freedom in 1911.

Bertha Hübner also wrote texts among others about Handarbetets vänners’ section Licium. During her years in Sällskapet Nya Idun she was the editor of a book in memory of the important member and author Henrika Widmark, after her death in 1920.

Bertha Hübner died in 1924. She lies buried at the Northern Cemetery in Solna. 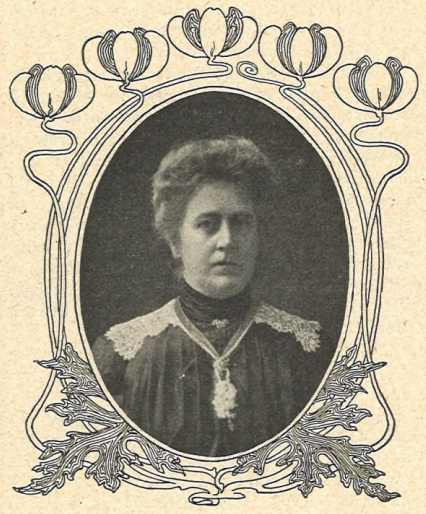